Microbial Clean-up of POPs in a Subsurface Environment

Persistent Organic Pollutants (POPs) consist of a wide range of contaminants with each group presenting different challenges and having different processes for bioremediation. Although Polycyclic Aromatic Hydrocarbons (PAHs) are not a POP under the Stockholm Convention, they are widespread in the environment and can be toxic, mutagenic and carcinogenic. Specific PAHs are seldom found in isolation and interactions can increase the aforementioned properties (15). This paper describes a new product for the clean-up of PAHs in a subsurface environment.

A new product for the clean-up of PAHs will be described including factors that could enhance or limit its potential, based on technical and literature reviews. The engineering and legal aspects of applying the product will also be examined.

The majority of research into PAH degradation has focused on aerobic rather than anaerobic processes so this product has been designed using findings from aerobic studies (15). Constituents of this product are shown in Figure 1. 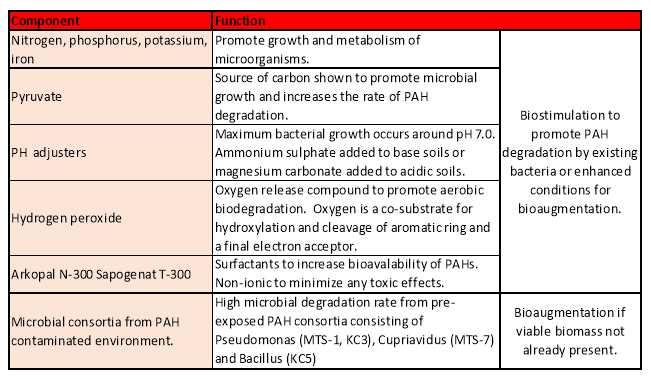 Indigenous bacteria may have evolved more efficient pathways and enzymes to degrade PAHs compared to commonly cultivated microorganisms (15). If these are present only the biostimulation part of the product may be required to feed the bacteria or change groundwater chemistry to create favourable growth conditions.

A consortia cannot be formed by simply mixing any bacterial strains know to degrade PAHs as they may not be compatible or form co-operative metabolic activities (17). Also pre-exposure of bacteria to hydrocarbons has be shown to increase the degradation rate (11). Therefore the most effective remediation may be achieved by developing a consortia from inoculants isolated from an environment impacted by long term contamination.

The consortium in this product consists of 4 strains: Pseudomonas (MTS-1, KC3), Cupriavidus (MTS-7) and Bacillus (KC5) and was formed by enriching and isolating bacteria from a manufactured gas plant site (17). The strains were then identified through molecular cloning and gene sequencing, mixed and the most effective PAH degrading consortia selected.

The consortia has been shown to degrade PAHs in soil slurry by 80-90% for LMW PAHs and 60-70% for HMW PAHs compared to natural attenuation rates of 55% and 40% for LMW and HMW PAHs respectively. Figure 2 shows the upper pathway for the aerobic degradation of PAHs. HMW PAHs are degraded first followed by LMW PAHs and carbon dioxide and water formed as by-products (5). 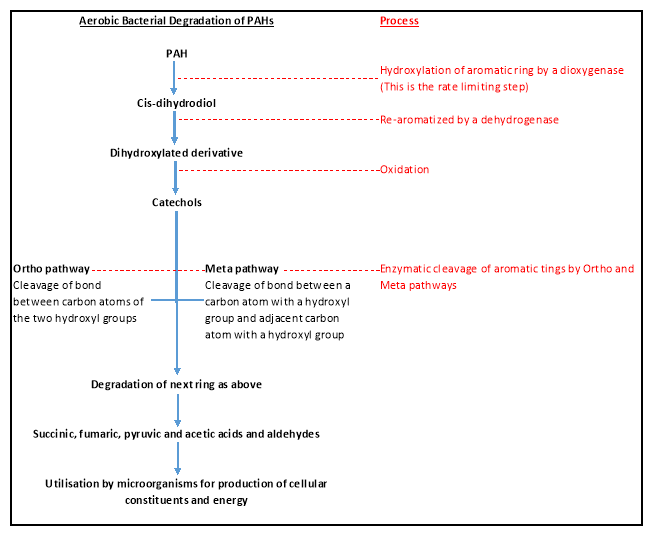 Dioxygenases are intracellular so PAHs must be taken in by cells for degradation to take place. Degradation rates depend on the mass transfer rates of contaminants from the solid or bound phase to the aqueous phase where they are bioavailable (8).Â  This can be increased by increasing the surface area between the substrate and the aqueous phase through the addition of surfactants (8). Concentrations of PAHs in the aqueous phase are proportional to the amount of surfactant available (8,11). For increased efficiency the biostimulation part of this product contains surfactants that have been shown to solubilize benzo[a]pyrene from the soil by 1000 times more than its water solubility plus all strains in the consortia are biosurfactant producers (13) (17).

Degradation rates could be increased by molecular cloning of genes responsible for PAH degradation, into highly replicating plasmids in bacteria (8). Genetic engineering could also be used to introduce or modify membrane proteins to facilitate transportation of hydrophobic POPs into the cellular interiors of microbes or cells could be modified to enable catabolic reactions on their surface (2). Alternatively, protein engineering could enhanced degradative capabilities by modifying catabolic enzymes so one strain can catabolize several POPs or so catabolic enzymes can degrade dead end products (2).

Genetic engineering is expensive, can be controversial, there may be difficulties in getting genetically engineered microbes to survive in the environment and gene transfer among microbes in the environment may lead to the emergence of new species (2) (4). It was therefore decided not to use genetic engineering due to cost and it would unlikely be acceptable to a regulator. (alex)

4.1 Factors That Could Enhance or Limit Potential of Product

The bioavailability of POPs is low due to their high octanol/water partition coefficient (Kow) meaning they are relatively hydrophobic whereas microbes and their catalytic enzymes are optimised for hydrophilic surroundings.Â  LMW 2-3 ring PAHs such as anthracene with lower Kow values, high water solubility and volatility are more mobile and therefore more rapidly degradable compared to HMW 4-7 ring PAHs such as Benzol[g,h,i]perylene which may be mutagenic and carcinogenic (4)(8).

The concentrations of soil organic matter and inorganic material effects the bioavailability of pollutants and reduces the survival of exogenous microorganisms (3). Where there is high organic and clay content PAHs are protected by sorption to organic matter and diffusion into micropores, thus limiting their degradation (4).

Temperature will impact the product as the rate of organic pollutant desorption from soil to aqueous phase increases as temp increases. For PAHs the soil water partition-coefficient decreases by 20-30% for every 10oc rise in temperature between 5 and 45oc (11). In addition with increased temperature dissolved oxygen decreases and the ability of the bacteria to cope with temperature ranges may affect the product performance (4)(15).

Lack of soil nutrients, bioavailability of carbon sources, presence of additional pollutants have been shown to inhibit biodegradation by affecting the physiology and ecology of microorganisms (17) (4). However, as shown in Table 1, this product contains nutrients and a carbon source for biostimulation. Heavy metal contamination is often found with PAHs but this product is designed with metal tolerant bacterial strains (17). The bacteria in this product are most efficient at degrading PAHs near pH7 so pH adjusters are also included.

Other properties of the contaminated environment that could affect the products potential include adverse effects in soil microcosm due to competition between indigenous and exogenous microorganisms and interactions of the inoculated bacteria with protozoa and bacteriophages (3). Low soil water content will result in decreased substrate availability and may have physiological effects on microorganisms due to cell dehydration (3).

Figure 2 shows the stages in the field application of the product which needs to be tailored to site specific conditions. The product will be sold in the form a soluble injection compound that will be injected upstream of groundwater flow through injection wells, extracted downstream and recirculated. 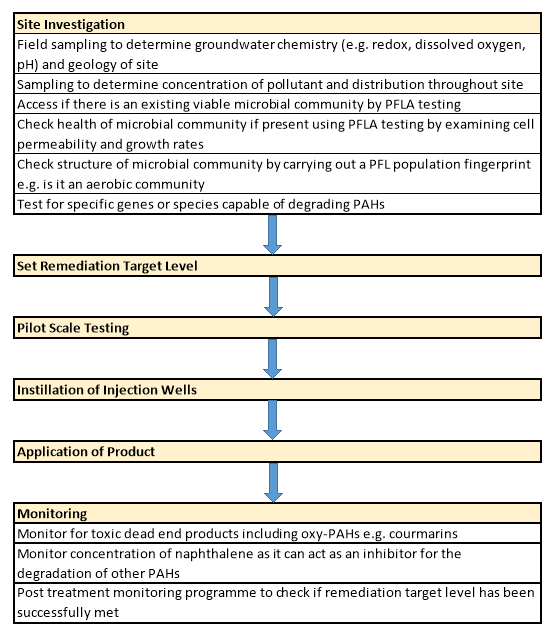 Table 2 shows some of the engineering challenges in the application of the product. 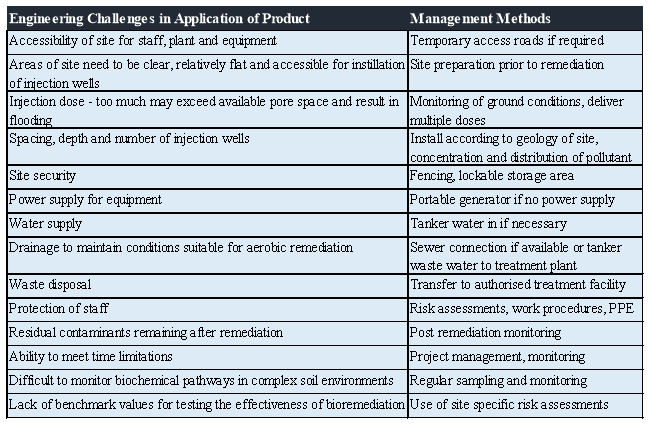 A mobile plant licence may be required for the treatment of contaminated land and may be regarded as an authorisation for the treatment of groundwater under The Water Environment (Controlled Activities) (Scotland) Regulations 2011 (9). When SEPA issue such a license a site specific working plan must be agreed with them.

Soil Guideline Values (SGVs) represent trigger levels for concentrations of pollutants in soils that may pose a risk to human health. They don't represent the threshold at which harm occurs or unacceptable levels in terms of Part 2A of the Environmental Protection Act 1990 but they may be a starting point for the risk assessment process for determining if the land is contaminated or remediation has been successful (6).Â  There are no statutory standards for soil contamination as site specific risk assessment taking into account the sources, pathways and receptors affecting a particular site (7). 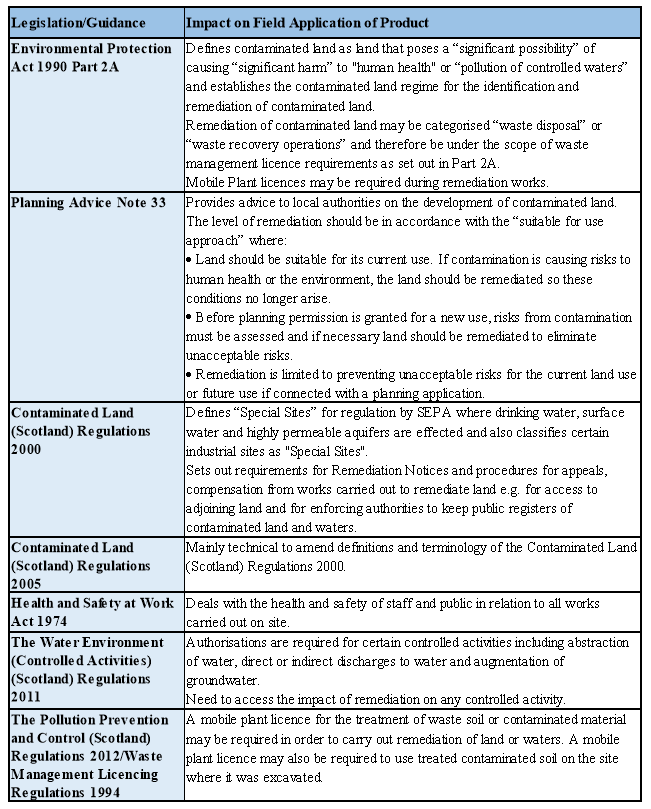 The first part of the product is the biostimulation part containing elements to promote bacterial growth, a source of carbon, pH adjusters, an oxygen release compound and surfactants to increase the bioavailability of PAHs. If the indigenous bacteria are not capable of degrading PAHs present the bioaugmentation part should also be used. The bacterial strains in the consortia are biosurfactant producers and are capable of degrading HMW PAHs.

The legal framework requires a site specific approach to the use of the product. Also the field application needs to be tailored to site specific conditions with environmental monitoring before, during and after application.