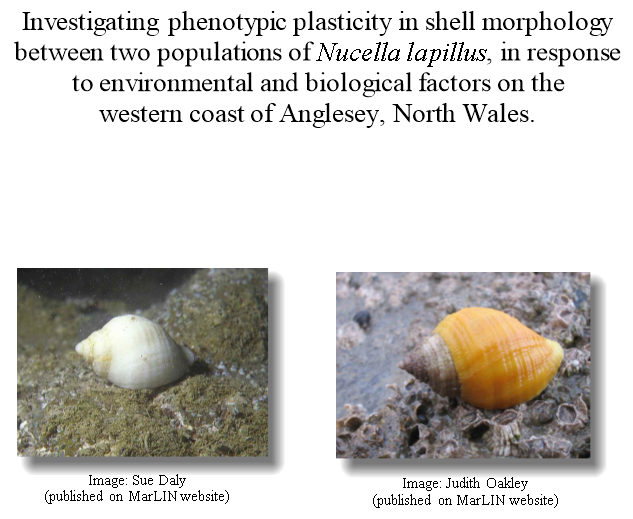 Different biotic factors such as predation, competition, forging time and abiotic stresses such as wave regimes and emersion time, large withdrawal space limiting desiccation can influence the phenotypic variation between populations of a same species from both exposed and sheltered shores (Gibbs, 1993). Shell morphology of exposed shores dog whelks differs from that of sheltered shore individuals. The shell wall is slightly thinner, since there are lower densities of predators on the exposed shore (Crothers, 1985). However, this population possesses a large aperture housing a larger muscular foot, allowing greater adhesion on rocks in an environment with greater wave intensity (Kitching et al.,1966). On sheltered shores dog whelks are more susceptible to predation by birds, such as the oystercatcher, Haematopus ostralegus, purple sandpipers, Calidris maritima andcrabs particularly the green crab, Carcinus maenas (Kitching et al.,1966; Moore, 1938).Â  As a counter mechanism against predation dog whelks on sheltered shore have a thicker shell wall. The smaller aperture houses a smaller foot, as adherence in reduced wave action is less important (Crothers, 1985).

Dog whelk Nucella lapillus (Mollusca), is a predatory marine gastropod (Crothers, 2003). The body whorl of its shell consists of 80% of the total shell length, which can reach a length of 40mm (Hill, et al., 2010).Â Â  With a life expectance of 6 years (Feare, 1970), dog whelks are motile animals but moves only 30m in their life time (Castel & Emery, 1981) and are constricted to the same environmental zonation. Nucella lapillus is distributed around the lower intertidal zone on coastal rocky shores of Northern Pacific and Northern Atlantic (Crothers, 1985), and is one of many important predators on the coastal ecosystem, regulating the equilibrium of populations of its prey, barnacles and mussels (Hill, et al., 2010). The specific objectives of this study were: (1) to conduct shell morphology observation and compare shell length and aperture data collected from dog whelks on an exposed shore and a sheltered shore. (2) examine morphometric measurements between dog whelks on both (3) to test the hypothesis that the total shell length/aperture length ratio of dog whelks on more an exposed shore will be smaller than that of sheltered shore conspecifics. 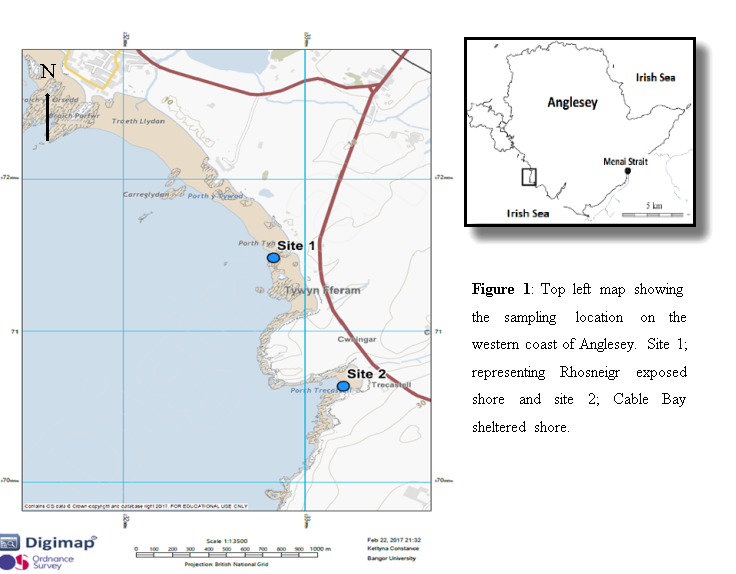 Two adjacent sites located on the western coast of Anglesey, North Wales were surveyed; the exposed shore at Rhosneigr (Ordnance survey grid reference SH 32906, 71490) and the sheltered shore of Cable Bay (Ordnance survey grid reference SH 33198, 70634) (Figure 1).Â  Both shores are in the same geographical area, approximately 900 metres apart facing the Irish channel and physical factors such as tidal heights, salinity and temperature were considered to be negligible.

Forty dog whelks were randomly selected at each shore. Total shell length and aperture height were measured to the closest 0.05 mm using a Vernier calliper (Figure 2).

Shell length/aperture length ratio was calculated for each shell. Data were analysed using SPSS software. Prior to analysis a Kolmogorov-Smirnov test was run to check for normality of data distribution and equality of variance was examined using Levene's test. Bar graph with error bar was computed to investigate the variability of data between the two shores (Figure 3). 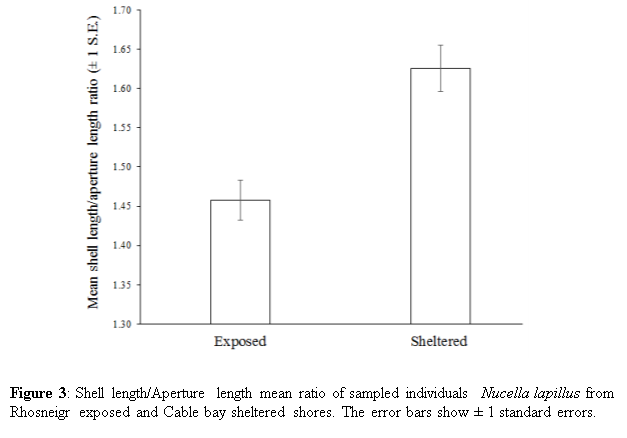 The results from this study suggest that the intertidal population of Nucella lapillus do exhibit phenotypic plasticity when faced with different selection pressures on exposed and sheltered shores.

Dog whelks on the sheltered shores have a smaller aperture in relation to a large body shell length. The smaller aperture houses a small foot, which has limited grip capacity (Berry & Crothers,1974). This feature is not important survival adaptation as wave impacts is lower and less intense on a sheltered shore. Alternatively, the advantage of a tall spired shell is a large cavity in which the animal may store water to avoid desiccation and it also provides more space in which to withdraw to avoid attacks from predators (Crothers, 1985). Additionally, the small aperture ensures reduced water evaporation (Pascoal, et al., 2012), leading to a better resistance to desiccation in sheltered areas where dog whelks are out of water for longer periods during low tides. Dog whelks found at the sheltered shore of Cable bay were more concentrated in rock crevices (pers. obs.), which may provide shelter from predation, dehydration and direct wave action (Crothers, 2003). However, being higher on the sheltered shore, dog whelks are emersed for longer periods leading to more forging time; this additional energy is invested in growing and thickening their shell to reduce predation risk as observed in Littorina obtusata (Brookes & Rochette, 2007). Dog whelks on the exposed shore possessed a shorter shell with a larger aperture, which allows for a larger foot (Crothers, 1985). This provides a larger surface area for better adherence to the substrate when faced with waves of greater frequency and intensity (Colton, 1922). A disadvantage of having a larger aperture is that shell water is more likely to evaporate, increasing desiccation risk. However, a wave exposed zone provides water sprays and splashback, which limits the loss of water. A large foot is more important to an animal's survival than having large withdrawal space, or thickened shell walls, as predation is very low on the exposed shore, due to the frequent occurrence of wave action. Being more exposed means more emersion time and forging time decreased. Dog whelk on both shores have limitation in foraging patterns due to different weather conditions. Fretter & Graham, (1994), discovered that dog whelks on exposed shores foraging time can also be influenced by sea conditions whereas sheltered shores, foraging is limited to sunny, warm weather. An experiment conducted by Stickle et al. (1985), showed that 25% of dog whelks feeding rate was reduced due to low salinity and temperature.

Another anatomical feature in both exposed and sheltered shore dog whelks, was teeth inside the aperture lip (Little & Kitching, 1996). The presence of aperturial teeth signifies maturity and provides a further form of protection by constricting the opening making it difficult for predators to reach the dog whelks' flesh (Little & Kitching, 1996). Crothers (1985), reported that aperturial teeth stops growing after 2 years but interruption during early growth either by lack of food or parasitism can result in additional rows of teeth (Bryan, 1969). For example, Feare (1970), experimented on the effect of the parasitic flatworm, Parochis acanthus in relation to number of teeth rows in 30 infected dog whelks, 17 had three teeth rows and 4 had four.

Growth rate has been reported to be influenced by several abiotic and biotic factors such as degree of food availability, wave exposure, competition and predation for both juveniles and adults dog whelks (Moran, 1999).Â  The population resilience depends on the survivability of juveniles as they are more subjected to predation due to their small size and thinner shells compared to the matured adults (Crothers, 1985). The pressures of bird predation are present on both shores. Feare (1967; 1970) reported during winter juveniles 2-5mm in length are preyed upon by purple sandpipers, Calidris maritima and oystercatcher, Haematopus ostralegus resulting to a 90% to 69% mortality rate Yorkshire coast and Robin Hood's Bay in 1965-66.Â  Whiles in summer juveniles are prey upon by common shore crab, Carcinus maenus (Feare, 1967), which has been reported handling dog whelks up to 15mm in length (Crothers, 1985).Â  Crothers (1985), suggested that apart predation on land in water lobsters can be a significant predator in crushing any adult size. On higher shores, predation by birds are more prevalent, as that is the natural environment of more terrestrial predators. It has been shown that juvenile dog whelk populations on the sheltered shore attains a large size more quickly (Crothers, 1985), growing at a rate of 9mm/ 150 days than the exposed population 6mm/ 150 days, decreasing vulnerability and explaining the longer shell length (Etter, 1996). Feare (1970), reported that rate of juvenile mortality as a result of predation is higher during first year to 90% and slowly decreases as dog whelks reaches the second and third year 50% to 27% as they reach size refuge.

Genetic variation can be a possible reason for the phenotypic adaptation (Staiger, 1950). Researchers suggested that the advantage of heterozygosity within the chromosomes aid in the adaptation of different ecological niches in the same surrounding environmental (Searle, 1988). Difference in chromosome counts have been observed in individuals of exposed and sheltered shores according to wave regimes (Day, 1990; Kirby, 2000). However, a population of Nucella lapillus found in Spain did not exhibit chromosome polymorphism (Divon, et al., 1994; Rolán, et al., 2004), which is possibly due to low intraspecific competition (Kitching, 1985). In Nucella lapillus, the shell thickening mechanism was an evolutionary step in protection against predation, as they have no larval stages, which limits gene flow between populations (Vermeij, 1982; Teck, 2006). Compared to Nucella lapillus, common periwinkle, Littorina littorea has a planktonic larvae stage (Currey & Hughes, 1982) allowing significant genetic mixing between populations (Berger, 1973).Â  Both species are found in similar microhabitats but have different dispersal abilities, it has been reported by Levins, (1968) that species with planktonic larvae stage displays low variation in shell characters compared to species with direct development (Janson, 1985). This suggests that an alternative response to phenotypic stability depends on the degree of gene flow between populations.Â  However passive transport of small hatchlings can occur occasionally but rare in population found on wave exposed shores due to water current as it was observed in emarginate dog winkle, Nucella emarginata (Martel & Chai, 1991). Trussell & Etter (2001), discovered two population of flat periwinkle, Littorina obtusata located in the northern and southern region in Gulf of Maine exhibiting change in shell characters. The northern population displayed 43% shell thickness than southern population 18% thinner shell structure. This selection in the northern population for rapid shell growth is because water temperatures are much colder.

Bryan, G.W., 1969. The effect of oil-spill removers ('detergents') on the gastropod Nucella lapillus on rocky shore in the laboratory. Journal of the Marine Biological Association of the United Kingdom, 49 (04), pp. 1067-1092.

Day, A.J., 1990. Microgeographic variation in allozyme frequencies in relation to the degree of exposure to wave action in the dog whelk Nucella lapillus (L.) (Prosobranchia: Muricacea). Biological Journal of the Linnean Society, 40 (3), pp. 245-261.

Vermeij, G.J., 1982. Phenotypic evolution in a poorly dispersing snail after arrival of a predator.