GEOLOGICAL OBSERVATION OF KABAENA ISLAND, SOUTEAST SULAWESI: AN IMPLICATION OF HYDROCARBON OCCURRENCE IN FRONTIER AREA BASED ON OUTCROP ANALOGUE STUDY

Kabaena island, located in the southeast Sulawesi province, has a complex tectonic condition due to its history. Field research on the island indicates that Kabaena Island formed by the rendezvous between microcontinent plates with oceanic plates that made up the complex lane between ophiolite and metamorphic rocks. These rocks were found from the results of field geological mapping.

The aim of this paper is to explain the geological condition and potential occurrences of hydrocarbon based on outcrop model and petrographic analysis. The results of petrographic observations indicate ultramafic rocks containing minerals Ca-Rich and Mg-Rich pyroxene and Olivine. While the metamorphic rocks show the occurrences of Chlorite, Amphibolite and sericite minerals. Observation of thin section in limestone lithology shows that these rocks had fracture porosity that might become reservoir rocks. The limestone unit had undergone metamorphism process and mostly changed into marble. The black shale rocks which from limestone units locally occurred on this island, mostly changed into metamorphic rocks and associated with low-level process that characterized several changes into slate. The black shale rocks may contain the organic matters as source rock potential.

Tectonic conditions in the study area indicates the occurrence of thrust fault by ultramafic rocks from oceanic into microcontinent plate. The other analysis also indicates another strike slip fault correlating the presence of gas seepage points in limestone unit. Some outcrops found as result of a one week geological mapping on Kabaena island. Several samples were used in petrographic observations.

Hydrocarbon exploration research in eastern region of Indonesia was done by few, especially in Kabaena island. This area was formed by the rendezvous between microcontinent plates with oceanic plates that made up the complex lane between ophiolite and metamorphic rocks. Tectonic conditions in the study area indicates the occurrence of thrust fault by ultramafic rocks on the plates microcontinent.

Previous research revealed the potential source rock in the form of black shale of Kabaena Island area. Vitrinite reflectance results included in catagenesis phase (oil window) and indicate the mature rock but potentially less of total organic carbon (TOC). These rocks are locally distributed in research area, characterized by poorly lateral continuity of black shale (Ibrahim et al., 2014). Therefore, geological observation is needed to determine the development of the geological conditions of the research area. This is a continuation of previous studies which showed some samples of the oil content has a pyrite content in them (Ibrahim et al., 2014). Although the total organic carbon in the sample is less potential, but it is needed to provide additional data for developing research of hydrocarbon potential in the research area and its implications for petroleum system.

The geological mapping on Kabaena island were conducted to identify the characterization of each formation (Simandjuntak et al, 1993) from outcrop locations. This research conducted from early until late March 2016. A few sample were collected and had been analyzed in the laboratory with petrography methods to determine mineral and rock properties type as characteristics and hydrocarbon potential occurrence.

Geomorphology observation in research area is generally comprised of plains and mountains. The morphological units of research area are divided based on classification of landform (Brahmantyo and Bandono, 2006) using topography analysis, DEM map analysis and field observation. Based on that, the units divided into mountains faults, karst hills, plains of rivers, and coastal plains.Â  The mountains faults and karst mountains are generally composed by pompangeo complex, ultramafic complex, and formation Matano. Whereas the landscape river plains and coastal plains composed by Langkowala formations and alluvial deposits. Characteristic of river flow system is a sub-dendritic pattern with vertical and lateral erosion. Land use is generally for residential land, plantation and mining areas.

The general lithology that was exposed on the research area comprised of sedimentary rock, igneous, and metamorphic rocks. The Rocks outcrop are commonly in scouring the walls due to roads expansion and bottom of rivers. The research area consists with various Pre-Tertiary rocks, Tertiary, and Quaternary. Pre-Tertiary Cretaceous rocks became the oldest rocks on Kabaena island, composed of ultramafic Complex, Matano Formation, and Pompangeo Complex from Cretaceous period to Paleocene epoch. The tertiary rocks composed of Miocene Formation of Langkowala and then Alluvium complete the formation from quaternary (Simanjuntak, et al., 1993). This research focused on Pre-Tertiary rocks that has implication of hydrocarbon occurrence.

Pompangeo complex are generally composed of low-moderate grade metamorphic rocks. Lithology which composed these metamorphic rocks are phyllite, mica schist, amphibole schist and chlorite schist. The field observation from the metamorphic rocks shown that foliated structure with direction relatively changing. It also showed the structure of the minor folds found in the study area (Figure 3).

On Matano formations, limestone is spread on the east to the south of research area. These rocks characterized with carbonate minerals such as calcite and dolomite as the form of diagenetic process. Limestone lithology unit on the research area mostly changed into meta-limestone and marble which can be seen on petrographic observations in the form of a change of the mineral calcite. The Matano formation also formed a black shale lithological unit that generally changed into slate (Figure 4).

The geological structure in research area was formed by thrust fault and strike-slip fault which refers to the geological map sheet of Kolaka, South East Sulawesi (Simandjuntak, et al., 1993). Each fault composed of irregular direction. The major stress direction commonly from Northeast to Southwest and Northwest to Southeast. Strike slip fault might control the deposition of rocks while the thrust fault limiting each lithology. The faults only found in pre-tertiary rocks. Tertiary rocks are not affected by the presence of faults.

The results of petrography analysis were observed on thin section from rock samples of peridotite, amphibolite schist, slate, limestone, and shale.

Peridotite rocks characterized with holocrystalline and phaneritic texture which composed by Ca-Rich Pyroxene, Mg-Rich pyroxene, and olivine Mineral Group (Figure 5). Based on the mineral content (Streckeisen, 1976) peridotite rocks classified as harzburgite, olivine websterite, and wherlite (Figure 6). Petrographic observations for muscovite schist shows foliated structure which composed of muscovite, Actinolite, Hornblende, and quartz (Figure 7). While at slate textures encountered sub-ophitic form with mineral content of clay minerals, quartz and calcite. On Matano formation's limestone shows the occurrence of calcite and dolomite minerals which spread on each sample (Figure 8). A few samples encountered showed a type of fracture porosity as part of secondary pores.Â  Shale rock composed by clay minerals, quartz, and calcite mineral due to dissolution from carbonate rocks.

The presence of source rock and reservoir rock from Matano formation made the research more focused into this formation based on potential hydrocarbon occurrence. Matano formation in the study area is scattered in the middle to the eastern part of research area. Reservoir rock that could potentially save the hydrocarbon reserves in the form of crystalline limestones, while the host rock in the form of black shale.

Source rock is an important element in determining the quality of produced hydrocarbons. Source rocks in the study site were found in Matano formation that had partially transformed into slate rocks due to pressure and temperature. It is associated with the process of low level metamorphism in the study area. Based on the results of geological mapping, the black shale rocks scattered in several locations and has the type of local deployment. It can be seen on the field observation stations map. The results of geochemical analysis show host rock into the category of mature but has unfavorable TOC value (Ibrahim et al. 2014). Potential reservoir rocks in the study area was found in the Matano formation's lithology, with its characteristic crystalline limestones. Limestone is spread laterally with layer thickness of 200-500m. Based on field observations gas seepage was found on one of observation station. Petrographic observations on thin section analysis shows rock porosity with 0-5%. Porosity that can be found was the fracture porosity. However, interconnectivity of pores is poor, because of the existence of calcite and dolomite cement and the recrystallization of calcite matrix. It might reduce pores which results in lower porosity and permeability quality.

Based on the petrographical analysis, the reservoir target which is a limestone of matano formation with limestone lithology characterized with fracture porosity which has poor quality of pores (0%-5%) while source rock target from black shale has bad TOC value.

The authors want to express their thanks to all the family in geological department University of Hasanuddin which have given attention and support to do geological field mapping. Special thanks to Mr. Kaharuddin MS whom always give moral support to finish the research activity. 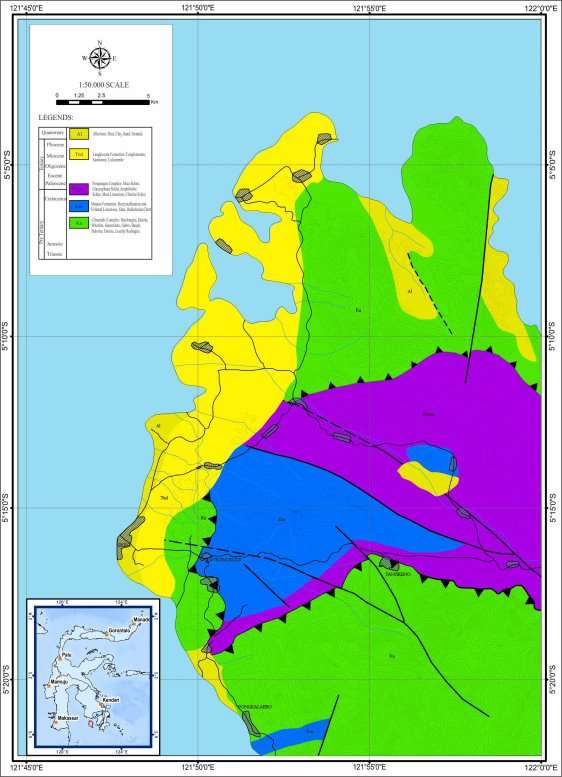 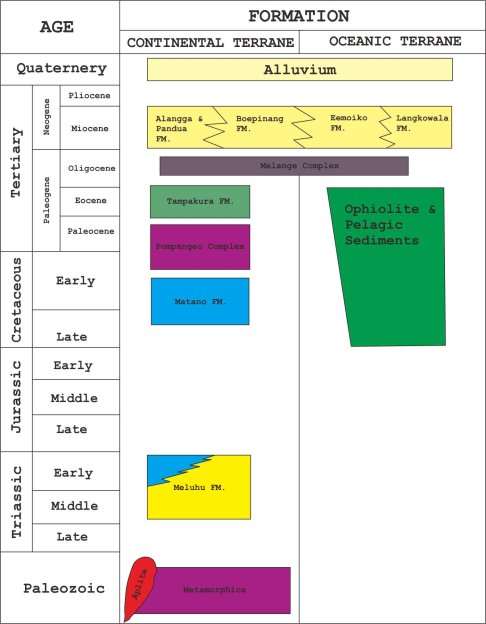 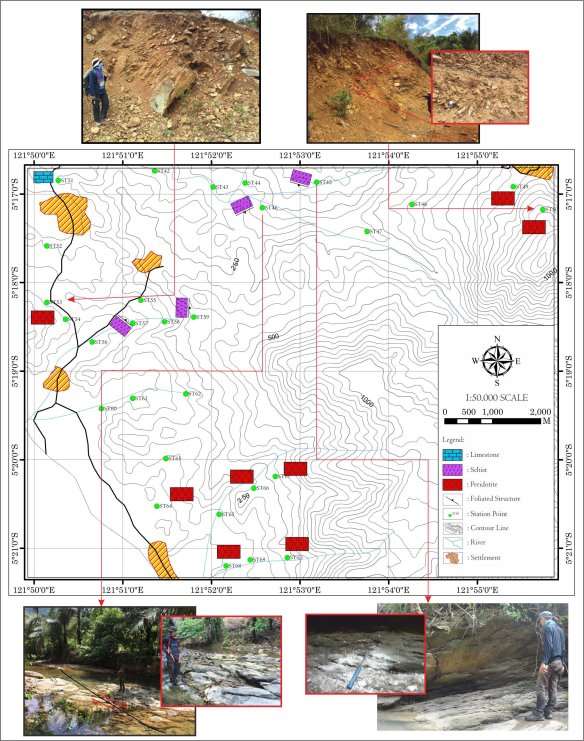 Figure 3 - Outcrop Location for peridotite and schist lithology. The schist sample location exist on a few station location which spread from North to Northeast from the map whereas peridotite spread on northeast to southwest. 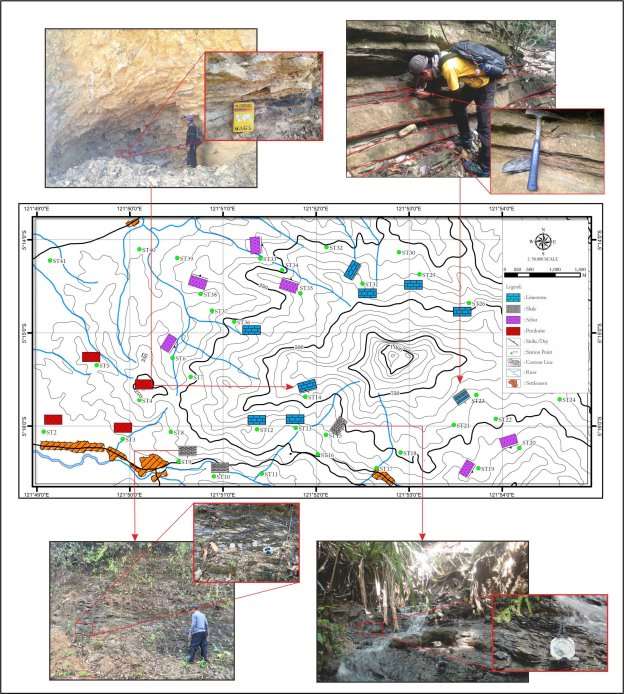 Figure 5 - Thin section of peridotite showed exist of Ortho-pyroxene mineral interpreted as hypersthene (4F). Some of olivine (6F) and Clino-pyroxene (1I) exist on this sample 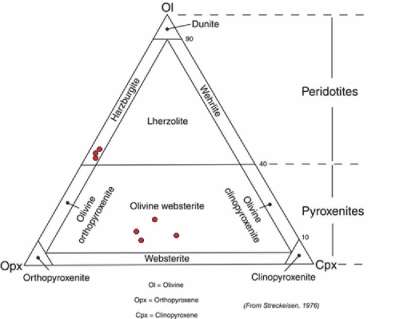 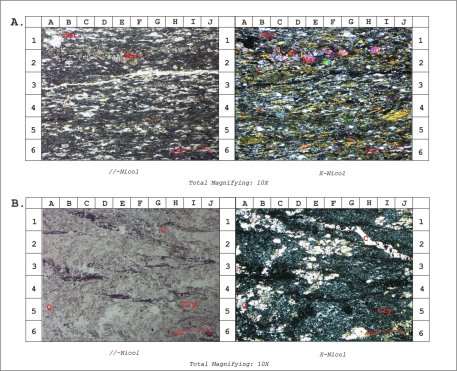 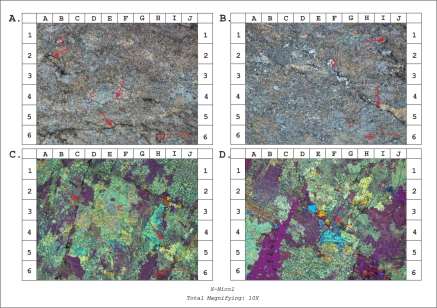 Figure 8 - Thin section of limestone sample shown the occurrence of fracture porosity (A. 6A-6F) Sample A and B dominated by dolomite while Sample C and D shown that the calcite minerals had changed as metamorphic process