Hemodialysis Patients in EMRO Countries and the Middle East

Hepatitis B Infection in Hemodialysis Patients in EMRO Countries and the Middle East: A Systematic Review and Meta-Analysis

Hemodialysis is a technique that has been widely used in the treatment of patients with chronic renal failure. In 2013, more than 2 million people in the world and 25,000 people in Iran were reported to have undergone hemodialysis. Patients on hemodialysis are more prone to acquiring some blood borne infections such as HBV than the members of general population that is owing to repeated blood transfusions, frequent hospitalizations, sharing of dialysis machines, repeated needle insertions, breaching of skin and their underlying impaired cellular immunity.

Despite advances in the field in developed countries, HBV infection remains highly prevalent in dialysis units of many developing countries. In addition to being at greater risk of acquiring HBV infection, it has been suggested that hemodialysis patients are more prone to become chronic carriers of HBV in comparison with the general population. So, procedures for the control of hepatitis B infection must be strictly introduced in all dialysis units.

To date, several studies have been performed on prevalence of HBV infection in hemodialysis patients from EMRO (The Eastern Mediterranean Regional office of the World Health organization) and the Middle East countries. Nevertheless, there is no overall estimation of the infection in these regions. In the present systematic review and meta-analysis, we have assessed the available evidences related to relative frequency (RF) of HBV infection among hemodialysis patients from EMRO countries and the Middle East.

We searched PubMed, ISI Web of Science, MEDLINE and Scopus (up to February 2017) databases by using the following keywords: "Hepatitis B", "Hemodialysis", "Iran", "EMRO countries" and "Middle East" (Table 1). In addition to English articles, two Persian scientific search engines including "The Iranian Scientific Information Database" (www.sid.ir) and "Barakat Knowledge Network System" (www.barakatkns.com) were searched as well for relevant articles. Also reference lists of all related studies were reviewed for any other related publication. Our search was restricted to the original articles/abstracts published in English and Persian which reported the prevalence of Hepatitis B virus by Enzyme Immunoassay (EIA) in Iran.

Included studies (English and Persian) used in this meta-analysis and systematic review must meet the following criteria:

B) Studies which involved hemodialysis patients

C) Assays such as EIA, because it is approved and accepted laboratory methods for HBV.

Articles were excluded from this review if:

A) Samples were selected from HBV and were archived before

B) Studies which used other methods

D) Congress abstracts, review articles, case report articles and studies reported in languages other than English or Persian, meta-analysis or systematic reviews and duplicate publication of the same study (or published both in English and Persian) were also excluded; with the exception of duplicate studied in which more sample size and more detailed results were provided.

From all of studies, the author's name, publication date, sample size, study setting, mean age, the RF of HBV, research location and risk factors were extracted. Data were extracted from studies based on title, abstract and keywords by two researchers, independently. Disagreements were resolved by consensus of the whole team in both phases.

We used checklist and diagram of the PRISMA, then critical appraisal has been done with STROB form. PRISMA and STROB can also be used as a basis for reporting systematic reviews of other types of research; STROB particularly evaluated the prevalence for any outcome. Items related to study type, sample size, research objectives, population and inclusion/exclusion criteria for primary research, method of analysis and appropriate presentation of results were determined and a score was assigned to each item. One score was assigned to each question and studies achieved at least eight quality scores were considered eligible for final Meta-analysis.

The numbers of total participants with HBV were used to estimate the relative frequency (RF) which was then converted to log RF and its Standard Error (SE) for the meta-analysis. Additionally, the Freeman-Tukey Double arcsine transformation of relative frequencies to calculate a pooled relative frequency (1). The heterogeneity and the variation in pooled estimation were assessed by using Cochran's Q test and I-squared, respectively (2). The pooled relative frequency of HBV was derived by a random effect model while the I2 index is more than to 50% and other wise this pooled prevalence was derived by a fixed effect model. Meta-regression was used to examine the relationship between RF of HBV and year and country of publication, studies's sample size with cause of heterogeneity of results (3). Finally, the sub-group analysis was used among area and year of publication (before 2005 vs. after of 2005). Sensitivity analysis was done by successively removing a particular study or group of studies (if any) that had the highest impact on the heterogeneity test. Publication bias was checked by Egger's regression asymmetry test and Begg's adjusted rank correlation test (4). All statistical analyses were performed using STATA 11.0 (STATA Corp, College Station, TX) and P-values under 0.05 were considered statistically significant.

A total of 9114 articles were retrieved by the database search. Summary of the literature search and study selection showed in Figure 1. In a primary screening process, 4321 of the publications were excluded due to duplication. In the secondary screening process, 4512 of the publications were excluded based on title and abstract evaluation, and 281 articles were retained for detailed full-text evaluation. After full-text evaluation, 37 articles (abstract with full-text articles) describing the prevalence of Hepatitis B infection in EMRO and Middle East countries were selected for the present study in order for are indicated in Table 2. All studies that we investigate the samples include Hepatitis B infectious specimens that take from patients and hospitalized patient in male/female and overages. As it is clear; most of the studies were conducted in central and west of Iran followed by the south. Figure 2 shows the forest plot and results of Meta-Analysis for the pooled estimation of the prevalence with 95% confidence interval.

The status of HBV in EMRO and Middle East countries is represented in theTable 2. By the using random-effects model, the pooled prevalence of Hepatitis B infection was found to be 4.4% (95% confidence interval (CI): 8.1-8.5%) (Figure.2). However, the evident heterogeneity of HBV HBV-RF was observed among studies (Cochran Q test, p value= 0.001,

). Although a slight asymmetry was seen in the funnel plot, this was not confirmed by statistical tests (P-value=0.447 for Begg rank correlation analysis; P-value=0.625 for Egger weighted regression analysis).

Sensitivity analysis was performed by sequential omission of individual studies. The combined RFs of the prevalence rate of HBV from sequential omission were not altered after omission, indicating that our results were statistically robust (Figure 3).

Hemodialysis patients are considered at increased risk of acquiring HBV infection. Prolonged vascular access and multiple blood transfusions during hemodialysis may play an important role in increased susceptibility to acquiring the infection. It was shown that incomplete adherence to standard and specific infection control precautions are the most important cause of person-to-person transmission of HBV in hemodialysis setting. Immunosuppressive condition is another characteristic in patients underlying hemodialysis which increases their susceptibility to infectious diseases like HBV infection.

HBV infection still remains a major concern among patients on hemodialysis due to its association with an increased risk of hepatic complications, decrease the chances of successful kidney transplantation, hepatic inflammation, prominent fibrosis, and considerable morbidity and mortality. According to the present study, an overall prevalence of 4.4% of HBV infection was reported among hemodialysis patients in the Middle-East and EMRO countries. Based on results of previous studies, the rate of HBV infection in patients on hemodialysis in developed countries was low (1%), while in developing countries the prevalence was higher (2- 20%). One interesting finding of our study was that the overall prevalence of HBV infection in hemodialysis patients is decreasing over the years, which can be explained by several different reasons, as will be discussed below.

The results of current study revealed that the prevalence of HBV infection in hemodialysis units varies across different countries, alongside wide variation among dialysis centers even within the regions of single countries. For instance, it is obvious that the HBV prevalence varies in different parts of Iran, with 1.2% reported from Isfahan (central of Iran), 2.1% in Mazandaran (North of Iran), 6.7% in Bushehr (South of Iran) and 3.2% in Tabriz (North-West of Iran). According to the previous study by Alavian et al., the prevalence of HBV infection in hemodialysis patients in Iran had a downward trend from 3.8% in 1999 to 2.6% in 2006, and our study has reported similar rate of HBsAg positivity with previous survey (2.9%). It is possible that mandatory implementation of screening blood donors for HBsAg in Iran since 1974 and erythropoietin administration instead of frequent transfusions have led to decrease of HBV infection prevalence in hemodialysis patients. Similar to Iran, studies in Turkey have shown a downward trend in the rates of HBV infection among hemodialysis patients from 11.1% in 1997 to 4.4% in the present study. This can be due to the mandatory precautions taken by the Turkish Ministry of Health (TMH) such as isolation of HBsAg-positive hemodialysis patients in a separate room, applications of the standardized infection control protocols in hemodialysis centers, strict surveillance and vaccination of the susceptible patients. Other countries such as Yemen (14.8%), Pakistan (9.1%), Saudi Arabia (6.7%), Jordan (6.6%), and Palestine (5.1%) represented higher prevalence although the number of surveys seems to be not sufficient in these countries. According to the only survey in Khartoum, Sudan, the prevalence of HBsAg (4.5%) was higher than the other EMRO countries and the Middle East. Also regarding the latest meta-analysis performed in china, the pooled prevalence of HBV infection among hemodialysis patients in China was 11.9%. This can be explained with the fact that the sub-Saharan Africa and East Asia have the highest HBV prevalence worldwide in general population, where between 5-10% of the population is chronically infected.

In conclusion, the results of our meta-analysis of 37 studies showed that the overall HBV prevalence rate among hemodialysis patients in EMRO countries and the Middle East was 4% which is decreasing over the years. Generally, prevalence of HBV infection in general population, quality health care services, and infection control preventive measures in hemodialysis centers are considered as key factors which may determine the prevalence of HBV in hemodialysis units. However, it should be noted that our results can be affected by several factors due to insufficient data on Middle East and EMRO countries resulted from small number of surveys and low or inadequate geographical coverage of studies. Some countries such as UAE, Syria, Qatar, Kuwait, Israel, Cyprus, Tunisia and Afghanistan had no published data on the prevalence of HBV infection among hemodialysis patients. Moreover, the number of studies is limited in countries such as Oman, Lebanon, Egypt, and Iraq, with only one study assessing. Thus, conducting updated studies in these regions are highly recommended.

The authors confirm that this article content has no conflicts of interest.

Table 2: Characteristics of studies included in the systematic review and meta-analysis

Table 3: Subgroup Analysis of area and year of publication. 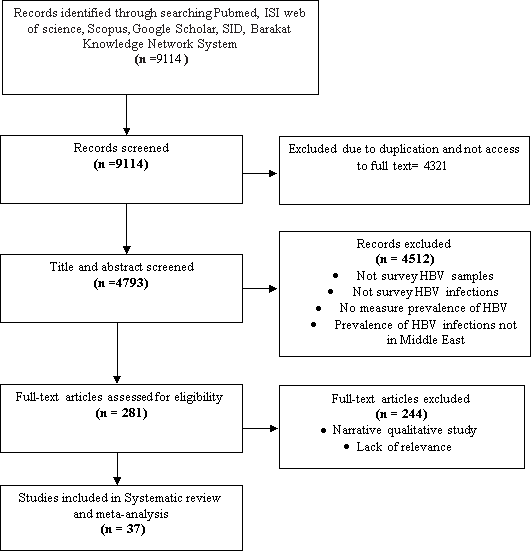 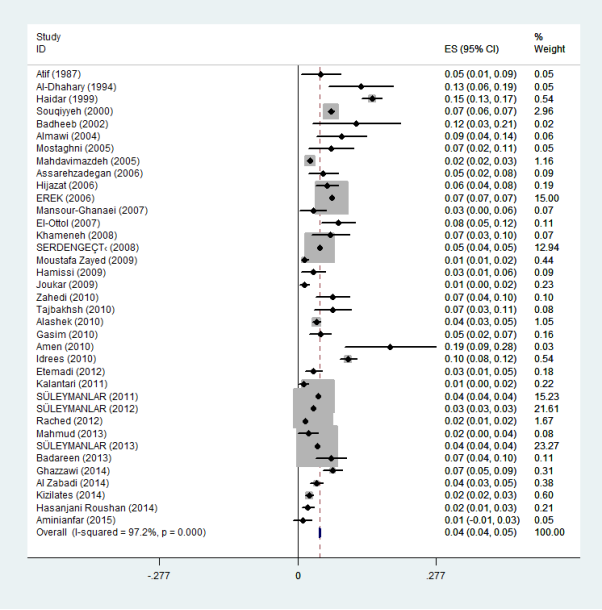 Figure 2: Results of Meta-Analysis for pooled prevalence with 95% CI and its forest plot. 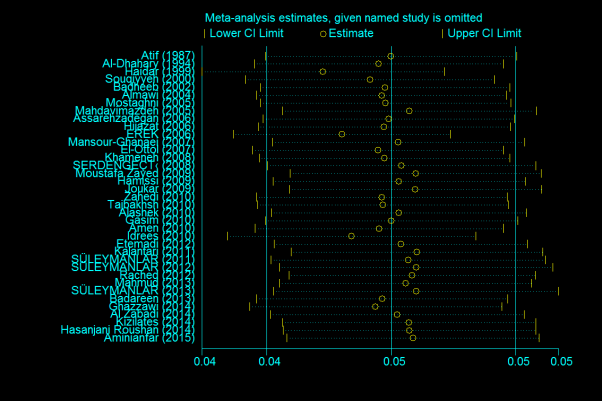