The main goal of this research was to evaluate the health condition of dairy cows in relationship with milk production and milk composition using continuous monitoring boluses in cooperation with University Experimental farm in Oponice. Totally, 7 Holstein cows had implemented bolus for monitoring rumen pH and temperature every 15 minutes with accuracy ± 0.1 pH and &deg;C. Milk production test-day records by Breeding Services of Slovakia, s. e. 5 times per each cow with bolus during 27 weeks of lactation were realised. Dairy cows were divided into three groups (NORMAL, SARA, KETOSIS) according to average daily pH. After that test-day records with the selected group were paired.  In the NORMAL group in comparison with the SARA group statistically significant higher pH by 9.81% (p&lt;0.01) with daily average 6.32 ± 0.29 was found. In contrary with the NORMAL group in the KETOSIS group higher (p&lt;0.01) daily average pH by 14.16% (7.39 ± 0.26) was found. In the SARA group lower daily milk production by 6.80% (p&lt;0.05) in comparison with NORMAL group was found. Moreover, KETOSIS group was producing daily less milk by 14.08% (p&lt;0.05) in comparison with NORMAL group. Afterwards, in the SARA and KETOSIS group narrower fat to protein ratio and lactose content was found. Then in the SARA group the lowest concentration of milk fat (p&lt;0.05) but the highest count of somatic cells and urea was determined. These results show that continuous monitoring of rumen environment is a suitable method for nutrition and health management in dairy herds.

Metabolic disorders of dairy cattle are related to disturbance of metabolic processes in the organism. The transition period which includes three weeks before and three weeks after parturition is very critical for dairy cows (Ametaj, 2010). Subacute ruminal acidosis is a common disease in high yielding dairy cows that receive highly digestible diets, and has a high economic impact and can affects feed intake, milk production. It can compromise cow health by causing diarrhea, laminitis, liver abscesses, production of bacterial immunogens and inflammation (Plaizier et al., 2008). Gozho et al. (2005) claims that SARA as when rumen pH is between 5.2 and 5.6 for at least 3 hours daily. Subacute ruminal acidosis (SARA) is defined as periods of moderately depressed ruminal pH (about 5.5-5.0) that are between acute and chronic in duration (Garrett et al., 1999). Plaizier et al. (2008) defined as a threshold for SARA time below 6.1 for more than 3 hours daily. Clinical and subclinical ketosis is a wide spread metabolic disease in dairy herds. Causes of ketosis are often a negative energy balance, because of high milk production and deficient energy intake, and excessive body fat mobilization. Deficient in energy intake often occurs after feeding of poor quality feeds, insufficient food intake or other metabolic disorders (Correa et al., 1993; Reksen et al., 2002) This disease leads to milk production depression and is often accompanied with depression of reproductive performance (Ospina et al., 2010; Chapinal et al., 2012). Therefore, the impacts of ketosis (clinical or subacute) on health, reproductive performance, and production can be costly for each affected cow, and can affect profitability of a dairy enterprise (Gohary et al., 2016). Tajik and Nazifi (2011) describe use of rumen fluid, rumen pH, stomach tubing, indwelling electrode, ruminal cannulation, rumenocentesis, rumen microbial composition, rumen fluids temperature, urine pH, faecal sievieng, faecal lipopolysaccharide, blood parameters as SARA diagnostic techniques. Clinical and subclinical ketosis can be detected using fourier transform infrared spectrometry for detection of ketone bodies (acetone, acetoacetate, β-hydroxybutyrate) in milk (De Roos et al., 2007), then by concentration of serum β-hydroxybutyrate (Karimi et al., 2016) or by evaluation of milk fat, milk protein and protein to fat ratio (Negussie et al., 2013). The main goal of this research was to evaluate the health condition of dairy cows in relationship with milk production and milk composition using continuous monitoring boluses.

Experiment in cooperation with the University Experimental Farm in Oponice during 27 weeks of lactation was realised. Selected 7 cows of Holstein breed (average age 3.57) had average milk production 10 175 kg per lactation with 3.94% of fats, 3.10% of crude proteins and 4.7% of lactose. From 7 cows were 3 in the 2nd lactation and 4 in the 3rd lactation. Experimental cows were loose housed with laying boxes system and automatic manure scraper in the manure corridor in the groups with another dairy cows together. Daily diet on the feeding table was folded. For 20 dairy cows two drinkers in one section were available.

Every dairy cow had implemented farm bolus for continual data measuring which was implemented through esophagus orally with the use of special balling gun. Ruminal pH and temperature values were measured every 15 minutes (96 data points per day) with accuracy ± 0.1 for pH. Used boluses (eCowDevon, Ltd., Great Britain) are characteristic with its small dimensions (135 * 27 mm) and weight  207 g. Data with the handset with antenna and dongle connected with USB dongle connector with the radio frequency 434 MHz in the milking parlour were downloaded. Milk production test-day records by Breeding Services of Slovakia, s. e. 5 times per each cow with bolus during lactation were realised. Collected data were summarized with HathorHBClient v. 1.8.1 and statistically evaluated with IBM SPSS v. 20.0 (One-way ANOVA, Tukey Test, Linear Regression). After statistical evaluation 3 groups according to average daily pH using filters were created. Dairy cows with average daily pH under 5.8 as SARA group, from 5.8 to 6.8 as NORMAL group and over 6.8 as KETOSIS group were filtered. Then results from milk production test-days to filtered groups were paired.

Further, frequency of pH intervals (Table 3) under 5.8, from 5.8 to 6.2, from 6.2 to 6.8 and over 6.8 were followed. As optimal pH range interval from 6.2 to 6.8 for rumen environment and cellulolytic bacteria is considered. In the NORMAL group on average dairy cows spent in this interval 14 hours and 48 minutes per day. In contrary, in the SARA group it was only 14 minutes and 56 second on average per day. For another comparison, the time spent in the optimal range in case of KETOSIS group 1 hour and 16 minutes was determined. Moreover, in the SARA group frequency of measured pH in this interval lower by 99.91% and in the KETOSIS group less by 96.56% was found. Interval of pH from 5.8 to 6.2 is potentially risk for rumen environment and its bacteria. Dairy cows in the SARA group were 6 hours 33 minutes in this interval. Unfortunately, in the NORMAL group the time spent in this interval 6 hours and 58 minutes was determined but the frequency of measured pH in comparison with SARA group was lower by 95%. Under the pH 5.8 is growth of cellulolytic bacteria inhibited. Dairy cows with SARA spent on average under this threshold 17 hours and 11 minutes daily. For comparison, the NORMAL group spent in this time on average only 1 hour and 3 minutes. The pH frequencies over 6.8 in the NORMAL and KETOSIS group were detected as follow: NORMAL group only 1 hour and 9 minutes and KETOSIS group 22 hours and 43 minutes. In comparison with normal group higher frequency by 679.79% was found.

On the base of findings is possible to make regression equation (R2=0.693, p&lt;0.05) for rumen pH estimation:

Similar circadian changes in pH values found Kimura et al (2012). Average rumen pH (6.82) decreased after the morning feeding and hit a low 11 hours later (6.46) and hit a peak after pH recovery by the next morning (6.91). During the first 3 hours after feeding similar drop in pH development was found in all dairy cows (KÅ™&iacute;Å¾ov&aacute; et al., 2010). The best range of rumen pH for rumen bacteria is between 6.2 and 7.0 (Barber et al., 2010). Luan et al. (2016) found mean pH in the rumen from 6.24 to 6.45 according to different grain challenge. Furthermore, the lowest pH from 5.28 to 5.59 and the highest from 6.69 to 6.95 were found (Maulfair et al., 2013). Similar results found (Mottram, 2015). Interval of measured pH from 5.32 to 7.25 was found. Average time under 6.1 during lactation from 1 hour and 13 minutes to 5 hours 42 minutes and under 5.8 from 18 minutes to 1 hour and 24 minutes was found (Yamamoto et al., 2016). Luan et al. (2016) determined the time spent under the 5.8 from 2 hours daily to 4 hours and 19 minutes daily. Moreover, depending on lactation number dairy cows spent under the threshold 5.8 from 5 hours and 24 minutes to 6 hours and 48 minutes (Bowman et al., 2003).Danscher et al. (2015) found milk yield depression and milk fat decrease in the group of dairy cows with SARA. Furthermore, in their study fat to protein ratio was narrower in the SARA group and higher milk protein content in the control group was found. In the study of Sulzberger et al. (2016) lower milk yield, milk protein content and number of somatic cells in the group with low daily pH was determined. In contrary, in the control group higher milk fat content, lactose concentration and urea concentration was found. Krause and Oetzel (2005) found drop in the milk production during SARA challenge. On the other side higher milk fat and milk protein content was determined. In the study of De Roos et al. (2007) was ketosis detected by ketone bodies in milk. In the group of KETOSIS cows lower milk yield, milk protein percentage, lactose percentage, urea concentration and higher content of milk fat was found.

All groups with the similar circadian changes were characterized because of the same feeding regime of dairy cows. Nevertheless, in all of groups large differences were found on account of metabolic diseases. In the NORMAL group in comparison with the SARA group statistically significant higher pH by 9.81% (p&lt;0.01) with daily average 6.32 ± 0.29 was found. In contrary with the NORMAL group in the KETOSIS group statistically significant higher (p&lt;0.01) daily average pH by 14.16% (7.39 ± 0.26) was found. SARA group had faster decrease of rumen pH in comparison with NORMAL and KETOSIS group 5 hours after morning feeding. However, in the SARA group better recover ability of pH during 5 hours before feeding was found. Afterwards, in the SARA and KETOSIS group lower milk production, narrower fat to protein ratio and lactose content in comparison with NORMAL group was found. Then in the SARA group the lowest concentration of milk fat but the highest count of somatic cells and urea was determined. These results show that continuous monitoring of rumen environment is a suitable method for nutrition and health management in dairy herds and it can avoid financial losses caused by metabolic diseases.

Table 2 Daily courses of rumen pH according to groups

Table 4 Milk yield and composition according to groups 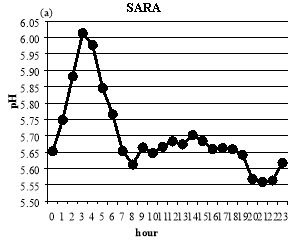 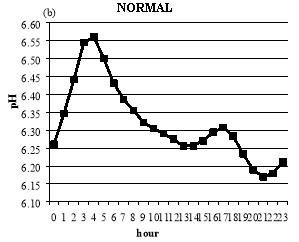 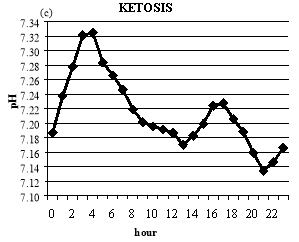 Figure 1 (a, b, c) Average daily courses of ruminal pH according to group