Comparing Measurements of the Speed of Sound

Finding the Speed of Sound!

To compare two measurements of the speed of sound to one accepted value. This will show which method is more accurate.

To begin, the first method of finding the speed employs a short simple formula based on known knowledge of the variables around you. At 0 degrees Celsius the speed of sound is 331m/s and for every degree change over 0, there will be an increase of speed by 0.6m/s. By being able to use this knowledge and the variables found in the lab during the experiment we can then substitute into the equation: V=331+0.6T.

After that the second method will be used and be compared to the first one. This method is a test of resonance vibrations. This test involves finding the height in which PVC pipe creates the loudest noise of resonance when a 512Hz tuning fork is vibrating over it. By adjusting the length of the PVC pipe exposed to the water, we can measure the distance when the fork and pipe are vibrating at the exact same frequency. Once the loudest resonance is found and has been measured, based on that length from the surface of the water to the top of the pipe, the wave length can be measured with Î»=4(l+0.4d). Based on this information, the next method utilizes the wavelength equation and answer and also the tuning fork frequency which is 512Hz. This information can be converted into the second equation of V=fÎ».

Determine the speed of sound using: 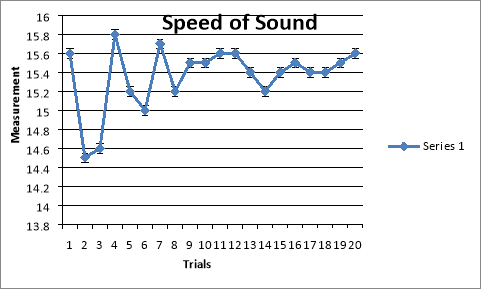 1st Method for finding the speed of sound:

2nd Method for finding the speed of sound:

The outcome of the experiment supports my hypothesis which states that the first method is the closest result to the accepted value of speed. The results from the experiment were affected by errors and or limitations that occurred throughout the whole procedure. Human error can affect dramatically due to the fact that eye sight is not as effective as a technological reading. There are limitations to using eye site. Next humidity must be taken into account; in humid conditions water molecules are more frequent, where as in comparison to gas is travels a lot slower because the molecules are a lot less frequent. Hence why, if there is more water molecules within the air then the sound waves will travel faster because there would be a lot more water molecules present. This consequently results in a non-exact answer as the humidity is not measured on the temperature thermometer. All of the methods could off had many predicaments as well. For one the tuning forks themselves may have been slightly off. The 512Hz fork used may not off been 512Hz due to age and wearing. Frequency is the number of times that an event occurs per unit of time. "For sound the frequency is often measured by Hertz which is abbreviated to Hz. Its measured from the top of one wave to the bottom of another, per second. Humans can generally only hear from 20Hz up to 20000Hz, while dogs can hear up to 60000Hz and as low as 1Hz". Overall mishearing of the sound could have been a very big setback, this in turn goes with the possibility of false measuring, in the fact that when measuring the distance where resonance occurred the student holding the pipe would constantly move by half a centimetre or so. This means an accurate result wasn't measured and that this would further the errors in the investigation. The final result of the second method was backed up by multiple errors that occurred making the second method the less accurate of the two. There are numerous ways in order for this experiment to be more successful and to minimize errors/failures. As said before instead of having a student move the pipe up and down until resonance was heard, take advantage of retort stands and of course clamps. This would lower the possibility of error when measuring, instead of being out by half a centimetre it may be out by a few millimetres. Tuning forks may not be succinct and should undergo a pre-test to ensure that they are resonating at 512Hz because of its age and wear. This would create more accurate results as you would be finding the correct resonant soundwaves. If these mistakes were not made the errors would be less, and the experiment would have been more successful. Due to mistakes the speed of sound was not the same as the excepted value which is 340.29 m/s at sea level and at 20 degrees Celsius. Theoretically method 2 should have been the more accurate but because of mass errors it was not. The big deciding factor that was found is that humidity isn't taken into account with method 2, so no matter how hot, dry, rainy or sunny the weather was, it wasn't affected at all. If all errors stated above, and the temperature and humidity were accounted for then both methods should have been either very close or exact to the accepted value of 340.29 m/s. The speed of sound within water is 1484m/s. This is nearly 4 times the speed of sound in the air. This is why animals such as dolphins and whales can communicate over such long distances. Humans can only communicate at a quarter of the distance that those animals can.

To conclude the EI for investigating the speed of sound, it was stated that the first method would be more accurate, and this hypothesis was correct. This was supported by the results as the speed of sound at 32 degrees Celsius was dramatically more accurate than its counterpart, measuring in at 352 m/s instead of 350 m/s. This dramatic change occurred due to the fact that there is a lot more room for error in the second method. Unlike the first second method, the temperature affected the second method dramatically