Theories of Witness Memory in Law Courts and Invesitgations

1. When, and why, are witnesses’ memories unreliable as evidence in criminal trials in England and Wales?

Human memory is too fragile to exactly remember the incident which happened that is why interviewing the witness to identifying the suspect is rather difficult task. Usually witness replies the interviewer in broad term and can only describe six or seven characteristics of suspect like age (Between 20-30) or height (between 5’6’’ – 5’8’’) that is why it is always difficult to get accurate knowledge about victim and they are considered unreliable in criminal investigations.

Human memory has a specific framework that should be considered while extracting crime scene informations from the human witnesses. Memory is one’s ability to recall the past events. Memory let us explain our personal experiences and perception about anything which is occurred in past.

Witness memory or human memory is structured on the following types.

Episodic memory refers to our memory of special event like accident, death etc. It is a kind of long term memory that includes remembrance of some particular events, conditions and incidents. For instance your first day at school or college, present at your friend’s party and your sister graduation. Furthermore, episodic memory also includes memory of your place and time at which any incident take place.

There are too many general knowledge is stored in one’s mind which comes under the semantic memory type. It also refers to the information which is stored in our mind to perform any skill. It also tells us how to perform in some repeated situation. It is also a kind of long term memory that is linked with the plans, sense and conception. These plans, sense and conception are not connected to the ones own experiences.

Understanding the procedural memory is rather difficult to understand and contains different kind of information. Generally it refers to series of events which occurred on numerous times. This type of memory explains actions and skills and how to perform them. For instance cooking vegetables and riding a car. This type of memory initiates at very early stages of life like you learn how to move, speak and engage in activity.

Witness memory is a fuel of any investigation because it let investigator to collect information about incident but human memory is too fragile to exactly remember every moment. Our memory has different segregations, like episodic memory keeps refers to our memory of special event like accident, death etc, Procedural Memory keeps the series of events which occurred on numerous times and Semantic keeps the general information. There are also numerous factors involved which affect witness memory that is environment factors, witness factors, stress levels of the witness/victim, weapon focus.

England and Wales have specified certain set of rules to consider human witness as a reliable source of information and as authenticated evidence.

According to Law , an evidence is that specific piece of information for which the two conditions of being relevant and being admissible must be satisfied. Its relevancy is depend on the reliability of those facts which it establishes about the case . However its admissibility cannot be defined as set rules as it can vary situation to situation.

Discussing psychological researches , their admissibility as an evidence is usually doubted in so many cases. This admissibility of evidences depends on the brain responses to various conditions, like forgetting incidents, fear , pressurized situations, witnesses concentrating on just one specific information and neglecting the other minor details that could be proved valuable in case proceedings.

Also the personality of witness, his age group , maturity level and metal conditions define the admissibility of its statement. English laws and courts have segregated witnesses in different groups and their reliability as evidence also varies accordingly.

Segregation of Witness Memory and Their Reliability

The vulnerable witnesses are defined as all the child witnesses under the age of 18 all those witnesses whose standard of verification and authentication is probably declined as they are affected by any mental disorder, physical disorder and intelligence impairment. The court of law considers the opinions and views of the witnesses in deciding if the witness lies in this group or category. Furthermore the witnesses whose standard of verification and authentication is probably declined under these conditions then the court of justice must take into account the conclusion, consistency and precision of their evidences. Vulnerable witnesses are not parallel group. The policeman and the staff of the police should be aware of the reality that not only all of the disable people will be considered vulnerable. That totally depends on the disability or disorder nature and check if the disorder really influences their capabilities to work as a witness.

The opinions of the witnesses where appropriate to the perception of the susceptibility witness should be considered. The police man and their staff should take in to taken if the witness voluntarily recognized himself as such and is doubtful to consider this. Collaboration and aid can also be given to them before and after the case. In the case instance steps, a witness who falls under the age of 18 will be allowed to help until the court does not believe that the steps taken will raise the standard of the evidence.

The victims of offence are witnesses in opposition to the claim even if they are previously given any statement to the police. This statement may be in the written form or videotaped. If you have been asked to be the witness then it is not so tough. You have been called so because you are knowledgeable in that particular case or situation. Preparation and honesty are the two basic requirements to answer each and every question you have been asked for. These questions should be related to the information you really know.

Human brain follows a specific pattern to store and things and investigating the witnesses against these natural brain rules also lead to information loss. Human memory , after witnessing any event , stores its information in the the following steps.

Step – 4 : Reporting and explaining the retrieve information to others. 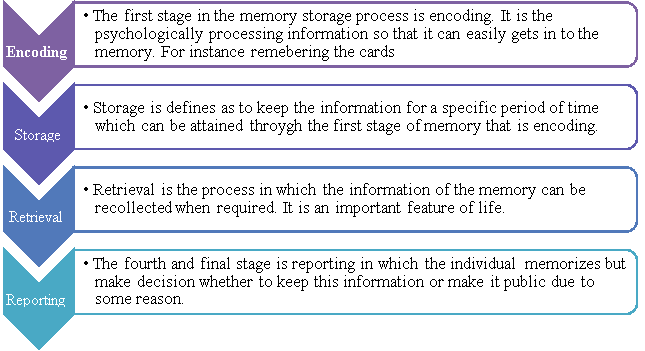 Reponse of Witness Memory to Attention

Attention is the first process of memory. It should always keep in mind that all the available information cannot be encoded at a very first stage. It must be attended first before we start encoding that particular information. There is a huge volume of information that is inundating our senses at each time. Therefore we make choices concerning the stimuli to which you deal with. Our brain has a limited processing capacity so it can only handles the incoming information at a time.

The information can be stored for a long period of time but a time comes when all of this information and memory fall into disrepair. And we forget all the information we learnt. In other words we forget the information so quickly as compared to the rate at which we learn that information. It has some indications in order to improve your memory power. The first indication is losing heart. You will mostly learn to a great extent than you can keep it for a long span of time. But it should always be keep in mind that the memories can be keep but it requires efforts. The second indication for improving memory is to preserve the memories with some efforts. It requires practice and revise.

The most important situations for making witnesses memories unreliable as evidence are “TurnBull” directions. This term indicates the state of witness at the time of incident happened because so many researches has found its massive impression on the quality of information.

There are too many environmental factors which affect the memory of witness and can damage the quality and quantity of information. R. V. Turnbull guidance proposed a term ADVOKATE

In England and Wales, evidence is not reliable, when the witness is in the state of Turnbull direction. because sometime witness rely on external help to recall the incident or he may have perceived wrongly due to distance or visibility or both (Milne and Bull, 1999)

Generally people under the investigation are not ready to recall the incident currently. Many factors like fear, stress and nervousness can affect their quality of information.. Sometimes they rely on external resources to feed them and they wrongly perceive the series of happening occurred at TBR events.

Sometimes witness may lie for any previous dispute or grudge. Witness may be biased and can provide wrong information to affect the investigation. Such information can be further manipulated by prosecutors and can completely change the case decision. Therefore, witness memories are considered unreliable as authentic evidence.

Police department is also responsible for damaging the repute of psychological researches. They manipulate the suspects and witnesses using psychological tricks.

Different methods are being used for different types of witnesses and suspects like children, adults and old aged. Phased interview sessions are the most recommended ones , where developing a comfort level with the witness, providing him with the opportunity of delivering open ended answers.

These psychological practices are preferred but still do not shown much progressive results. As the process is high influenced by the interrogation officer, surveys has shown that in most cases , their accelerated behavior has become the reason of process failure in more 43% cases.