Quade Cooper, Australian rugby union player, was born in Auckland, New Zealand but moved with his family to Australia after being scouted for his rugby skills. Cooper’s dad says that “he was always like a kiddie who felt he had to prove something, he had talent, and he was always a bit smaller and lighter, like he could be the lightest kid in the team he played for but he had the skills. It was a challenge for him to keep up with the bigger kids and I think he thrives off it”. By the end of grade 10, he had already decided to pursue a rugby career “I didn’t care if I played in bare feet, it was never gonna stop me from getting to where I wanted to be and that was playing at the top” (Cooper, 2011). Cooper won a scholarship to Anglican Church Grammar School (Churchie) for his senior years and went on to start for the First XV, and won the Queensland GPS Premiership in 2005. Cooper was selected for the Australian Schoolboys in both 2005 and 2006. He played Fly-half and won nine schoolboy caps, which was the equal record at that time. Cooper won the Australian Player of the Series in the 2010 Investec Bank Super 14 and the following year he won the Super Rugby title with the Queensland Reds, providing many inspirational performances in the lead up to and the in the final. Few months later he led his national team to win the Tri Nations for the first time in 10 years. Cooper also took Australia to the 3rd place of the Rugby World Cup and at the peak of this remarkable series of achievements he got seriously injured during the last game of the World Cup Bronze Final game.

Nature of the problem

Injury has been shown to be a significant source of stress for athletes (Tracey, 2003) and in particular injury severity has been found to affect the intensity of athletes’ emotional responses to injury (Brewer et al., 1995; Smith et al., 1990) and Cooper broke his ACL during the game against Wales and as it usually happens when athletes get seriously injured, this event brought shock and anxiety straight into the life of the player. Cooper expressed his distress stating: “when I stood up I just knew I had done my ACL, I’m gonna be out for a while here and it hits you. You start to think of all the things you gonna miss”. Before presenting an adequate intervention plan to help the player cope with the situation it is important to analyse all the aspects surrounding the player, his injury and his personality. Aspects such as self-perception (Chan and Grossman, 1988; Leddy et al., 1994; McGowan et al., 1994), self-confidence (Magyar and Duda, 2000; Quinn and Fallon, 1999), age (Brewer et al., 1995; Smith et al., 1990) and athletic identity (Brewer, 1993; Young and White, 1995; Young et al., 1994) have all been shown to affect athletes emotional responses to injury. Quade Cooper’s disappointment is evident when the player says: “it’s a long time on the sideline and when you see your teammates on the field, ball running and you can’t do much, just sit and watch. It’s tough”. Watching others compete, the inability to train, isolation, putting on weight have all been shown to be important sources of stress in injured athletes (Bianco, 2001; Johnston and Carroll, 1998) It is clear how Cooper’s self-perception and athlete identity are strongly tied with his rugby career: “This is all I wanted to do, I’ve always looked at the World Cup like a place where I wanted to be, on the biggest stage in the world, in front of all your supporters, all your critics as well, that’s about proving to yourself that you are where you belong”. Another aspect to be considered is the previous injuries that affected Quade Cooper and how he responded to them since Tracey’s (2003) study revealed previous injury experience influences the emotional response in the rehabilitation process. In particular we can observe that although he was already playing at high level Cooper says that he “injured a knee when I was 18 and I did not look after my body very well. A six-month injury turned into a 12-month injury because I did not look after my body. I could not run. I was getting sore every time I ran. My skin folds were up. Mentally you go out there and think I am supposed to be able to do these things and I can't”.

In order to understand psychological response following athletic injury, some researchers have established models (Brewer, 1994; O’Connor et al., 2005; Wiese-Bjornstal et al., 1998), although these models are different one to another, they all agree on the fact that an injured athlete experiences denial, anger, and depression in the first stages of the injury (Kübler-Ross, 1969; Hardy and Crace 1990), therefore those will be the target of the earliest stages of the intervention. The model designed by Wiese-Bjornstal et al. (1998) (Figure 1) shows all the factors that affect the rehabilitation process and that need to be taken into consideration to plan a successful intervention strategy. 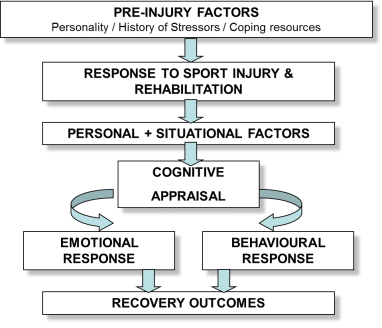 This model, as opposed to other models, takes into account pre-injury factors and suggests that the recovery process keeps being affected by behavioural and emotional responses that need therefore to be kept monitored throughout the rehabilitation in order for the intervention to be effective whatever is the stage and the challenge that the athlete is facing. Because of the seriousness of the injury and not only the stress that it brings but the shock and tension that also come with it, a useful technique that Cooper needs to be to taught is progressive relaxation. Progressive muscle relaxation is a technique that involves tensing specific muscle groups and then relaxing them to create awareness of tension and relaxation. It is termed progressive because it proceeds through all major muscle groups, relaxing them one at a time, and eventually leads to total muscle relaxation. As little as 10 minutes of progressive relaxation have been shown to have positive effects on general mood ratings (Taniguchi et al., 2007). Studies have also shown relaxation to be effective in significantly reducing pain sensation and or pain distress (Seers and Carroll, 1998; Schaffer and Yucha, 2004) which is important considering the painfulness of an ACL injury and the post-operation. The model of injury response proposed by Wiese-Bjornstal et al. (1998) suggests that a variety of personal and situational factors influence the way that injured athletes cognitively appraise their injuries. In turn, how athletes cognitively appraise their injuries appears to influence their emotional and behavioural responses, and that’s why the education process needs start now that the athlete has been diagnosed with a ruptured ACL and knows the severity of the injury. Quade Cooper will undergo the ACL reconstruction next week. This week will be useful to build a rapport with the injured athlete, since the different emotions he is experiencing at the moment can make it difficult for helpers to establish a relationship of trust with the athlete, and to educate the athlete about the injury and recovery process (Weinberg and Gould, 2006) and to start learning the techniques that will be used to cope with the injury. The most important psychological skills to learn for rehabilitation are goal-setting, imagery, and relaxation training (Hardy and Grace, 1990; Pepitpas and Danish, 1995; Wiese-Bjornstal and Weiss, 1987), and although the athlete might already know and use these techniques, studies show that athletes who use imagery in sport do not automatically use it to the same degree when they are injured (Sordoni et al., 2000). That’s why it is of key importance to encourage athletes to use the psychological skills just like they would do when participating in their competitions. While the goal of any progressive relaxation program is to relax the entire body in a matter of minutes, it is essential that in the beginning the subject practice the technique for at least one hour every day. Once the relaxation procedure is well learned, the relaxation response can be achieved in a few minutes. Jacobson's method calls for the subject to tense a muscle before relaxing it. Jacobson warns that only the first few minutes of any relaxation session should be devoted to muscle tensing. The remaining time should be devoted to gaining complete relaxation. For a muscle to be considered relaxed, it must be completely absent of any contractions and must be limp and motionless (Cox, 2011).

Here ill talk about imagery and motivation or goal setting

Danish (1986) makes a good point when he says that an athlete with an injury is no less and athlete, no less of a person than before the injury. That is to say a whole-person approach is preferable. Social support is critical in the rehabilitation process, particularly with severe injuries. Moreover there are several sources of social support during sport rehabilitation, such as family and friends, coach and teammates, medical staff and other people who had previous similar injuries (Arvinen-Barrow et al., 2010). It is necessary that the psychologist makes coach and physiotherapist aware of their important role in supporting the athlete. In fact, they have the possibility to support directly the athlete, but also to involve teammates and other injured athletes in the social support-based intervention (Santi and Pietrantoni, 2013). Particularly physiotherapists, who are close to the athletes during the rehabilitation, provide significant emotional and informational support (Ford & Gordon, 1993; Gordon et al., 1998). emotional support provided by family, physiotherapist and others, has an effect in reducing depression, instead informational support reduces anxiety and increases self-confidence. Finally, appraisal support provided by other injured athletes determines an enhancement in coping strategies, treatment motivation and satisfaction, and a reduced fear to reinjury (Rees et al., 2010; Handegard et al., 2006; Hogan et al., 2002). Emotional and instrumental support are mainly provided by family and friends. They may be more supportive if the psychologist trains them on active listening and positive thinking, and their involvement in the intervention has a relevant effect on athletes' mood (Hogan et al., 2002). In order to enhance peers support it is possible to organize meetings among athletes who are injured at the same time, or with athletes who had previously experienced similar situations (similar injury, similar career, etc.). During these meetings athletes may discuss about their feelings, concerns and ways to cope the stress. Involving other injured athletes in the rehabilitation process may increase athletes' satisfaction for the treatment and their coping strategies.

Quinn, A. M. and Fallon, B. J. (1999) The changes in psychological characteristics and reactions of elite athletes from injury onset until full recovery. Journal of Applied Sport Psychology 11, 210-229.

Tracey, J. (2003) The emotional response to the injury and rehabilitation process. Journal of Applied Sport Psychology 15, 279-293.