There seems to be an underrepresentation of people over 60 years old when compared with the prevalence of mental health problems common for this age group and the available ethnic data is mostly consistent with data from other audit samples (NAPT).

In terms of reducing depression, the benchmark of 50% was not met, both services reporting recovery for only 43.6% of the clients.

A sample of 298 participants who received high-intensity psychological treatment for moderate levels of depression, were asked to provide prior and after the therapy contextual information on a range of socio-demographic and service-related variables. The results are presented in the following section.

In order to see the prevalence of age range in service users, 6 age categories were used. From Figure 1 it can be clear that the most prevalent age range of clients who accessed the services was that of the 30 to 39 years old.

When compared to other data sets, such as the one provided by The National Centre for Social Research (done between October 2006 and December 2007), a similar trend seems to emerge, that the majority of people receiving treatment for depression are those aged between 25 and 54 (McManus et al., 2009). However, as observed in the NAPT dataset, there is an underrepresentation in service users of over 60, taking into consideration the prevalence rates of common mental health disorders for this age group.

As seen in Table 1 the number of females that accessed the services was greater than the number of males. This pattern of results has been observed throughout other data sets (IAPT and NAPT). Furthermore, The Adult Psychiatric Morbidity Study (2007) established that the prevalence of mental disorders is higher for women than for men, therefore this might be an explanation for the higher number of females.

Figure 2 shows there isn’t an underrepresentation of any ethnic group. When compared to the NAPT dataset, these results don’t follow the same pattern, with the most prevalent ethnic group in this sample being that of black origins, compared to 84% of white origin in the NAPT dataset. Furthermore, NAPT also found that the smallest ethnic group was of asian origins, whereas in this sample, the smallest group is that of mixed origins.

Figure 3 shows that there is difference between total household income and the choice towards services, with clients earning more than £25000 being more likely to use private services.

In order to examine the quality of the treatment, the patients’ preference towards NHS or private sector was firstly analysed. From Table 2 it can be seen that although the difference in patients was not high, the private sector was preferred by the public.

Secondly, the influence of age on the choice of services was also examined. As seen in Table 4, there is a tendency to prefer the private practice in all ages, except the over 60 year old clients.

Finally, the influence of the total household income on the choice of services was also analysed. Looking at Table 5, it can be noticed a tendency of preferring the private sector for clients with an income of over £15000, whereas clients with an lower income preferred the NHS service type more.

The range of waiting time for both NHS and private services from referral to treatment was between 1 to 26 weeks. It can be seen from Figure 4 that 95.3% of the patients waited less than 18 weeks before assessment.

Figure 5: Waiting time before assessment for NHS and Private sector 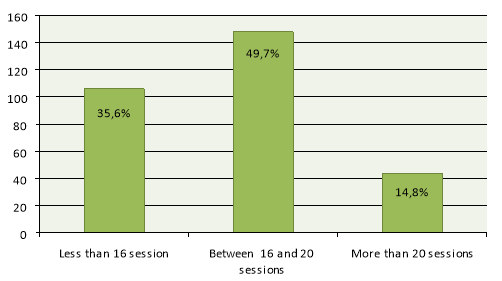 As can be seen from Figure 7, 82 % of the clients were satisfied with their treatment. However, when looking at the differences in types of services, as seen in Table 6, the patients who were less satisfied with the treatment, tended to be those in the private sector rather than the NHS. 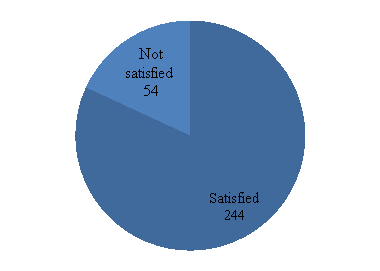 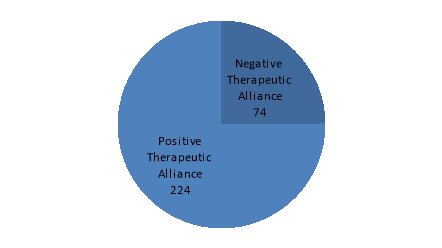 In order to see the effectiveness of different service types and therapeutic approaches, each individual score on the Center for Epidemiologic Studies- Depression (CES-D) scale was placed in one of the following two categories: bellow 16 and above 16, 16 being the cut-off point to indicate a diagnosis of depression. From Figure 8 it can be seen that only 43.6% of the clients recovered, therefore reaching a score of less than 16 on the CES-D scale post intervention.

Although only 43.6% of the clients recovered, all patients showed signs of improvement, with differences between pre and post intervention scores between 9 and 48. The average mean score of the difference was of 23.45 with a standard deviation of 7.78. 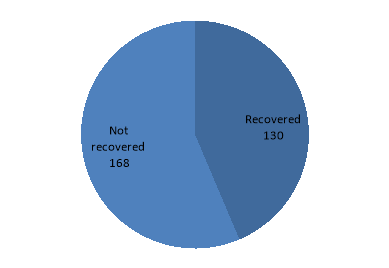 In order to examine whether the therapeutic approaches will help clients alleviate depressive symptoms, a factorial analysis of variance was used with one independent factor, type of therapy (CBT, psychodynamic therapy and behavioural activation therapy), and one repeated factor, scores on the CES-D scale (pre and post intervention). The analysis showed that there was a significant improvement on the CES-D scale between pre and post intervention (see Figure 10). However, when conducting pairwise comparisons in order to see which of the therapies was more effective, results showed that there was no significant difference between them.

Figure 10: Effectiveness of Therapy looking at pre and post-intervention mean score for types of therapies 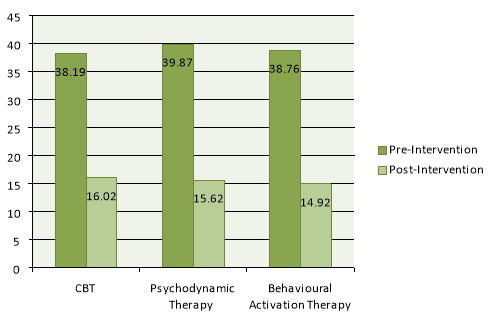 A second factorial analysis of variance was used to investigate the effectiveness of the service types with one independent factor, service types (NHS and private), and the same repeated factor, scores on the CES-D scale (pre and post intervention). The analysis showed the same pattern of results, with significant improvement on the CES-D scale between pre and post intervention (see Figure 11) however with no significant difference between the services.

Figure 11: Effectiveness of Therapy looking at pre and post-intervention mean score for types of services

However, it can be seen from Figure 12 that there is a difference between therapies, in terms of post intervention scores for self-esteem and global life satisfaction. In order to see if the difference was significant, t-tests were used to compare the means of each therapy. The results showed that the Psychodynamic Therapy was the most effective therapy at increasing both global life satisfaction and self-esteem, when looking at post intervention scores.

Figure 12: General well-being looking at mean scores for each type of therapy

In terms of efficiency of the two types of services in increasing general well-being (taking into consideration post-intervention scores), there is no significant difference between NHS and the private sector, as it can be seen in Figure 13.

Figure 13: General well-being looking at mean scores for each type of services

2. There was an underrepresentation of clients over 60 years old taking into consideration the prevalence rates of common mental health disorders for this age group.

3. The standard waiting time proposed by the NICE guidelines was met for 95.3% of the clients.

4. Only 49.7% of the patients received the standard number of sessions recommended by the NICE guidelines, with a significant percentage of clients receiving less than 16 sessions.

5. Out of the 298 clients, 75% of them reported a positive alliance with their therapist. Furthermore, 82% of the clients were satisfied with the treatment.

6. The statistical analysis showed a significant difference between pre and post-intervention scores and showed that 43.6% of the clients had recovered at the end of the therapy.

7. Psychodynamic therapy shows a significant difference in both self-esteem and life satisfaction when compared with CBT and Behavioural Activation Therapy.

The recommendations have been grouped according to the problems seen in the audit.

Quality of services: waiting time and duration of treatment, satisfaction with treatment and alliance with therapist.