Social Distance and Regulatory Focus Effect on Over Choice

The current research examines whether regulatory focus vary according to social distance (self, close friend, stranger), and investigated whether the self-other decision making in over-choice contexts induce a reversal choice overload effect to an individual. 21 undergraduates rated satisfaction in accordance with social distance after selecting colours using swatches either few or many options. Against previous research, the post-satisfaction was higher when participants make decision for themselves. Moreover, there was a choice over load effect but no reversed effect when participants make decision for others. Thus participants tend to use promotion regulatory focus for self and prevention focus for others. Further research need to investigate this area in greater depth.

Decision making is the cognitive process of selection a logical choice from the available options. The economic models of behaviour known as rational choice theory assume that individuals take into account each piece of relevant evidence to ensure that they come up with the optimal decision making in all situations (Becker, 1976). These models, however, do not match actual behaviour. Rather than evaluating costs and benefits or calculating probabilities, what is actually decided can depend on the context of situations (Kahneman&Tversky, 1973). There has been a consequent increase in studies designed to determine decision making strategies which may be appropriate in various cases.

Regulatory focus theory is an example of decision making strategies. The theory posited by Higgins predicts the two orientations to purse a goal: promotion and prevention (1997). A promotion focus emphasizes accomplishments and advancement with approaching gain. Alternatively, a prevention focus emphasizes safety and responsibility with avoiding loss. The utility of gain or loss is considered subjective and depends on the difference that it will make to the reasoner’s self-regulation. For example, a small gain is worth more to someone who has little (promotion) than to someone who has a lot (prevention).

An interesting point is that the self-regulation is applied to make choice for others in different way; while individuals who make decision for themselves prefer avoiding losses, people who make decision for others prefer acquiring gain (Kray, 2000; Polman, 2011). Researchers have found that risk taking increased when participants were choosing on behalf of others compared to when choosing for themselves (Stone, Yates, &Caruthers, 2002; Beisswanger et al, 2003; Sabrina et all, 2007). Polman suggests that this is because personal decision makers tend to use prevention focus (i.e. loss aversion), and conversely, proxy decision makers use promotion focus (i.e. risk preference) (2012B). This self-other theory is connected to the construal level theory (CLT) which describes the relation of psychological distances. The general idea is that the more distant an object or event from the individual, the more abstract the conceptualisation and perception (Trope & Wakslak, 2007). As a result, people tend to engage in more risky behaviour in high-level construal than low-level construal.

It is, however, difficult to generalize as there can be numerous decision making methods which is each approach often claims to be the more effective method. Most of all, it is doubt whether a person would show the same propensity when s/he make decision for self and others at once (at the same time), rather than making decision for self or others separately based on individual’s personality. Social distances also need to be subdivided into three (low, middle, high) rather than two (low, high) pounder over CLT. Current research, therefore, examined 1) if an increase in three subdivided social distance generates a higher level of satisfaction to a person depends on whom the decision is for, 2) if a choice overload effect is present when selecting a choice for self and a reversal choice overload effect is present when selecting a choice for others.

Participants There were 27 participants, 14 in few and 13 in many choices. 21 women and 6 men were allocated randomly. The participants ranged in age from 19 to 22, with a mean age of 20.29 years (SD=1.06). All participants were level two psychology undergraduates at Sheffield University.

Materials A limited array (8 colours) or an extensive array (35 colours) of paint swatches was used in each condition of choice array (Appendix1). The colours were labelled with numbers to avoid any confounding. A questionnaire was used to instruct scenario and choose a colour (Appendix2). Follow-up questions were used to record the main dependent measure (post-choice satisfaction and regret) using a 10-point scale, anchored at 1 (not at all) and 10 (a lot) (Appendix3). Data analysed using SPSS.

Procedure Participants took part in experiment individually and instructed to follow the scenario on the questionnaire. Half of the participants made selections from self, close friend and stranger in order, and the other half made selection in reverse order to counterbalance. The participants were asked to select a colour what they would like to use in their own and other’s bedroom among either 8 or 35 colours. After selecting a colour, the participants rated satisfaction and regret for their choices from 1 to 10 scales. When participant had no further questions, they received a debrief describing the study’s aim.

An alpha level of .05 was used for all statistical tests. Prior to analysing ANOVA, Shapiro-Wilk test and outliers were obtained to examine the distributions for the primary dependent variable satisfaction. Although the Shapiro-Wilk showed each data were from a normally distributed population except a small number of participants who make decision for others in many choices option (p=0.29, others overall p>.05), there was large inconsistency between satisfaction and reversed regret regarded as a result of either participant’s misunderstanding or unconcern about the experiment with low reliability (α =0.186, 0.560, 0.788 respectively). Six participants, therefore, who showed an inconsistency of more than four, were excluded as bivariate outliers. The regret score was reversed and combined with satisfaction into one scale (α =.674, .805, .892 respectively). Levene’s test indicates that variances are homogenous for all levels of repeated measures variables (p=.260, .333, .057 respectively).

Hence, data collected from 21 participants (11 in few 10 in many options) were analysed using a mixed-design factorial ANOVA with a within-subject factor of social distance (self, close friend, stranger) and a between-subject factor of options-choice array (few, many) to examine the effects of choice overload on self-other decision making. Since Mauchly’s test had been violated (W=.60, X2(2)=9.19, p=.01), degrees of freedom were corrected using Greenhouse-Geisser estimates of sphericity (ε = .714). 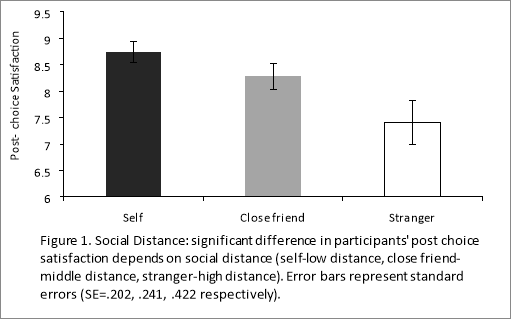 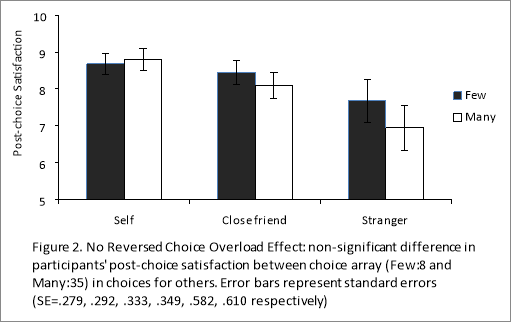 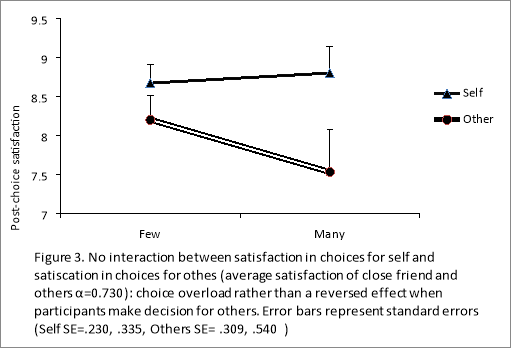 Overall, there was a significant difference on social distance, but was not neither self-other effect nor reversed choice overload were observed. Rather, the results demonstrated the completely opposite effect to previous study. Although there was a significant difference among social distance, the participants’ satisfaction was higher on choice for self than close friend or stranger. Moreover, participants did not exhibit any pattern of reversed choice overload, but did of choice overload when they make decision for others. These results indicated that participants used promotion focus for self and prevention focus for others. Thus, there was no evidence to support Polman’s claim.

To understand the results of the current experiment some implications can be taken into consideration. Perhaps the most obvious explanation is that the self-other theory and reversal choice overload is not always pre-eminent away from other strategies. This may because multiple conflicting criteria need to be evaluated in making decisions. Phrasing equivalent choices as situations involving a loss or a gain, therefore, can alter the choices people make in way that do not accord with normative theory. On account of contradictions, some decision making methods that weight against to our prediction may explain the reason why personal decision makers showed promotion focus, while proxy decision makers showed prevention focus.

First of all, the opposite effect of social distance may due to regulatory fit theory. When people believe that there is a math between orientation and a goal, they will intensify response (e.g. more positive response for positive dicision) by feeling rightness about pursuit a goal (Avnet&Higgins, 2003; Higgins, 2000, 2005). Regulatory fit may not directly affect the judgements, but influence a person's belief in their reaction to the object or event (Aaker&Lee, 2006). If participants had a colour with high preference in the swatch they used, therefore, it would be no surprise why they rated higher satisfaction on personal choice.

Second, a hypothetical scenario could have influence on experiment. CLT is not restricted to social distance but expanded to the idea of temporal and hypothetical distance (Pennington & Roese, 2003). For instance, temporal distance may create confliction with social distance in that the decision people make for future selves and other people tend to be similar to each other but different from their present decision (Pronin, Olivola &Kennedy, 2008). According to Gilbert et al (2004), when attributing the cause of problem people tend to blame themselves in hypothetical situation, but often blame external circumstance in real situation. This probably led participants to feel the sense of responsibility on proxy choice.

Finally, reciprocal determinism may be the answer. The reciprocal property predicted to play important role when combining the judgements of several individuals for the group (Saaty, 2008). Some researchers also have argued that people tend to feel more regret when the problem is important in the context in social (Janis and Mann, 1977), especially when others have interests with the decision (Zeelenberg, 1999). This can alter the participants’ regulation focus.

In conclusion, the finds suggest that the reversed choice overload of proxy decision makers have no predominance effect on overall participants’ satisfaction. The failure to find the effect appears to have theoretical implications. Further research should test whether the reversed effect can be generalized with other decision making strategies and investigate more reasonable explanations for difference if it shown to exist.