The Role of Testosterone in the Experience and Expression of Human Social Behavior: What We Do and Do Not Know

It is no surprise then that humans have hormones circulating through their bodily systems that influences how social behaviour is expressed within certain environmental and social contexts (Naeve and O’Connor, 2009). One such hormone, and the focus of this essay, is testosterone.

The role of testosterone in how humans experience and express social behaviour has often been linked to behaviours in relation to maintaining social status, such as dominance, aggression, competition, and pro-social behaviour, as well as various affiliative behaviours such as attraction and partner bonding. It should be noted however, that according to Booth, Granger, Mazur & Kivlinghan (2006):

“...the nature of the link between testosterone and behaviour is not simply a biological ‘cause-and-effect’ mechanism [but rather a]…bidirectional relationship that is highly dependent on intrinsic individual differences in social perception, previous experience and propensity for specific behaviour, as well as the demand or ‘press’ of the social context for particular behaviours” (p. 170).

In other words, testosterone, combined with an individual’s life experiences, social context and innate tendency for the behaviour, may increase the possibility that a certain behaviour will be expressed.

To much of the world, the term ‘aggression’ often comes to mind when discussing testosterone (Booth et al., 2006; Dabbs & Hargrove, 1997). Although there is a link between aggression and testosterone, particularly in some animal studies, it would be more accurate to say there is a strong link between testosterone and dominance (Eisenegger, Haushofer, & Fehr, 2011). Aggression is commonly defined as “...behaviour intended to inflict physical injury on another” (Booth et al., 2006, p. 170); whereas “...dominance behaviour is defined as behaviour intended to gain or maintain social status” (p. 170). It has been suggested that the purpose of dominance behaviour, is to convey that one has power and influence, as well as to show the possession of valuable resources, such as money or property. Thus, one can surmise that dominance plays an integragal role in the formation of human groups, corporations and even governments (Booth et al., 2006; Eisenegger et al., 2011; Mazur, 1985; Mazur & Booth, 1998).

Interestingly, research with many different animal species, as well as humans, has found “...that individuals with a higher baseline of testosterone are more driven to gain and maintain status” (Newman, Sellers, & Josephs, 2004; Ruizde-la-Torre & Manteca, 1999). Newman et al. (2004) also maintains that testosterone determines behaviour in situations in which one’s status is in jeopardy, this implies that testosterone may enhance awareness towards signs of social dominance, such as certain facial expressions portraying emotions such as anger or hostility (Terburg, Aarts, & Van Honk, 2012).

Researchers have also found that ‘winning’ dominance battles brings about a high testosterone response, which then predicts ensuing status seeking behaviour (Booth, Shelley, & Mazur, 1989; Mazur & Booth, 1989; Newman, et al., 2004). For example, in Booth, et al. (1989)’s study, testosterone levels in male tennis players, was found to rise prior to a match. Testosterone levels further rose in the winners of a match (in comparison to the loser’s testosterone levels) and continued to be high prior to subsequent matches. In other words, success brings about a high testosterone response, which “...begets more dominant behaviour, which begets more success” (Mazur & Both, 1989, p. 8).

Another area of social status and dominance that testosterone is associated with is competition. Various studies have found that testosterone levels rise immediately (within minutes) after a competitive situation is identified (as reviewed in Salvador, 2005). This is portrayed in an experiment conducted by Kouri, Lukas, Pope and Oliva (1995). In this study, men were given either a dose of testosterone or a placebo. Participants were then put with another (fabricated) participant, and told that each subject could press a button to receive money (this is construed as a non-aggressive response) or to reduce the amount of money going toward their opponent (aggressive response). They found that participants who had received the testosterone doses, pressed the button to cease cash flow to their opponent, indicating a high number of aggressive responses. In other words, this study indicates that individuals with high levels of testosterone are more competitive.

It has been suggested, that when one’s social status is not being challenged, dominance and high status is better served by acting in a pro-social manner (Boksem, et al., 2013; Milinski, Semmann, & Krambeck, 2002). Various studies have shown that a “...good reputation (as defined as honest, authentic, generous and trustworthy) is important for acquiring or maintaining high social status, and the expression and repayment of trust is an important social signalling mechanism that influences both competitive and cooperative behaviour” (Boksem, et al., 2013, p. 2312).

This is illustrated by Boksem et al. (2013) when they investigated the impact of testosterone levels on trust and reciprocity using a monetary trust game involving an investor and trustee. In the game, one participant, the investor, chose how much money to invest in another participant, the trustee. The money, once sent to the trustee, was tripled by the experimenter. The trustee could then return some of the money, honouring the trust and ensuring both players, a larger amount of money than the original amount. The trustee could also choose to retain all the money, neglecting trust, and leaving the investor with less money than the original amount. Since evidence suggests violating a trust is highly aversive, participants were faced with the dilemma of maximizing personal outcome or maintaining a positive social image. The researchers found that a dose of testosterone decreased trust, but would reciprocated generosity more times than those who did not receive a dose of testosterone. This indicates that testosterone may play a role in status-seeking behaviours. Testosterone could also increase aggressive and dominant behaviour when an individual is confronted with social challenges and threats, but in the absence of such threats, it may increase pro-social behaviour when high status and reputation are at stake (Anderson & Kilduff, 2009).

Another pro-social type behaviour that testosterone is linked to is affiliative behaviour—behaviours that bring individuals into contact, such as hand clasping, hugging, and partner bonding (Insel & Winslow, 1998). Van der Meij, Almela, Bunk, Fawcett and Salvador (2012) conducted a study to test whether affiliative behaviour in humans is preceded by changes in testosterone. The male participants, who were not in a relationship, first competed in a non-physical computer competition against another participant, which raised their testosterone levels. The participants then entered a room to work on a puzzle, where an unfamiliar confederate also worked on a puzzle. The participant’s behaviour around the confederate was then recorded. The results showed that participants who had the highest level of testosterone following the competition, showed more interest in a woman, but not with a man. This, combined with findings from similar studies (van der Meij, van de Sande, & Salvador, 2008; Roney, Mahler, & Maistripieri, 2003), suggests that during encounters with the opposite sex, testosterone may encourage courtship behaviours (van der Meij, 2012).

Though scientists continue to make new discoveries about the complex role testosterone plays in human behaviour (Booth et al., 2006), there are still many areas in which more research could be conducted. One such area is the role of testosterone in women. Booth et al. (2006) noted that, “Much of our knowledge is based on studies of men and boys because males produce far more testosterone than females, so the hormone is easier to measure. The effects are [also] clearer in males than females” (p. 169). There has also been research showing the role of testosterone in depression, and in family and friendship relationships (Booth et al., 2006).

It should be recognized, that many researchers maintain the argument that the link between testosterone and behaviour is weak, if it exists at all (see peer commentaries following Mazur & Booth, 1998). Though there are many testosterone studies in the animal literature, it has been noted (Josephs, Sellers, Newman & Mehta, 2006; Simpson, 2001) that the majority of human studies are correlational, rather than causational. Josephs et al., (2006) asserted that “only if a participant’s behaviour is situated in circumstances that challenge or threaten a status should one find strong and predictable effects” (p. 1011). However, animal studies are an integral part of studying the effects of testosterone in humans, they provide a basis for research in humans, and more physiological manipulated experiments are possible in animal studies (Newman, et al., 2004).

Another aspect of testosterone’s role in human behaviour that we do not fully understand is the underlying mechanisms and processes by which testosterone and behaviour interact (Raine 2002). Researchers have acknowledged that we do know that hormones do not directly transform behaviour, but rather influence how the behaviour is expressed within a specific environmental or social context (Booth et al., 2006; Gleason, Fluxjager, Oyegbile & Marler 2009; Mazur & Booth, 1998; Neave & O’Connors, 2009; Newman et al., 2004). Fortunately, as Neave & O’Connor (2009) can attest, hormone studies are becoming cheaper and easier to conduct, which will allow more psychologists to delve deeper into this subject.

In conclusion, there is much that scientists have discovered about the role of testosterone in human behaviour. It has been established that testosterone has a role in social status maintaining behaviours such as dominance and competition, as well as in pro-social behaviours such as partner bonding and trust. Current research has delved into other areas that this essay was only able to touch on such as testosterones role in depression and in other family and relationship behaviours, such as parent-infant bonding. Though there is much that scientists do “know,” there appears to be many areas in which future research is needed, something sure to occur as hormone studies are becoming cheaper and easier to conduct. Some of these areas include conducting more research with human subjects to show more causational effects of testosterone, testosterone’s role in female participant’s behaviour, and the underlying processes by which testosterone, social influence, and personal experience interact to produce a particular behaviour.

Raine, Adrian. 2002. Biosocial Studies of Antisocial and Violent Behaviour in Children and adults: A review. Journal of Abnormal Child Psychology 30: 311-26. 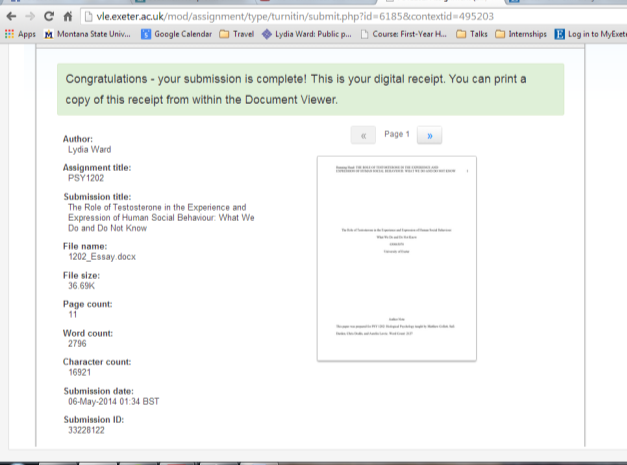