The production of language is a complex process which is imperative in human communication. The ability for a human to produce language is fast and efficient; it is thought that an individual can produce approximately two to three words per second, this is remarkable as there are about fifty to one-hundred thousand words in the average humans mental lexicon. Producing language consists of many different processes, in particular this study is interested in lexical selection for spoken naming. There are many theories as to the way in which lexicalization works, this is the process from which a semantic representation develops into a word. It has been thought that when seeing a stimulus a semantic representation of that stimulus activates a range of lexical representations from which one is selected. As naming the stimulus is restricted to the production of a single word there is competition in which only one out of the many activated words will be selected.

A picture-word interference task (MacLeod, 1991) has been commonly used to study the effect of which a distractor word has on the time it take individuals to name a stimulus. This task is comparable to that of the Stroop interference task (Stoop, 1935). Stroop presented individuals with words (names of colours) which were either written in black of a incongruent colour. He found that when the word was incongruent it interfered with participant’s performance. Although similar to the Stoop interference task, the picture-word interference task instruct participants to name a image and ignore the superimposed word. As this task uses images, a variety of target words and distractors can be used from a range of categories, which do not necessarily have to be from the same ‘response set’. This task has consistently found that when the superimposed word produced greater interference on participant’s performance when it was semantically related compared to when it was semantically unrelated.

The picture-word interference task ask participants to name an object but ignore the superimposed word. Although this is similar to the Stroop interference task, it differs in that by using pictures a wide variety of target words and distractors from many different categories can be used which don't necessarily have to be from the same 'response set'. The picture-word interference task has found that presenting participants with a distractor word that is semantically related to an object interfered with participant’s naming time more then when the word was semantically unrelated. This is thought to reflect competition in the process of lexical selection.

Further studies have also found that distractor words do not also result in an interference effect and certain distractors can improve participant’s performance. For example, Sailor, Brooks, Bruening, Seiger-Gardner and Guterman (2009) found that same category distractors ('co-ordinates') interfered with participant’s naming times. However, when the distractor was associated to the stimulus a facilitation effect occurred. A study conducted by de Zubicarary, Hansen, and McMahon, (2013) also found a facilitation effect from associates. The findings from these studies challenge the idea that all related distractor words compete for lexical selection.

Seventy-seven participants, all of which were fluent in reading and speaking English language were recruited from the University of Essex community via opportunity sampling.

The experiment included twenty different line drawings (which SuperLab 5 presented as stimuli) , each drawing had a single distractor word superimposed upon it. The superimposed words were in Geneva 36-point font and presented in lower-case.

Before starting the experiment participants engaged in a familiarisation stage for approximately a minute and a half. At this stage, twenty target pictures were provided with their 'target name', the purpose of this was to familiarise participants with the word of which they were expected to produce in the experiment.

After the familiarisation stage participants engaged in a practice trial, (consisting of ten trials) they were instructed to name the stimulus on the screen and ignore the superimposed word. Participants then began the primary experiment whereby the completed one-hundred and twenty trials. Participant’s had to vocally state the name of the stimulus that they were presented with, the computer started the timer as soon as the image appeared and stopped as soon as sound as heard. Once the participant had stated their answer the experiment had to determined whether the response was appropriate . The experiment pressed the ‘Z’ key is response was deemed appropriate and the ‘X’ key if not.

Any participant which had more than twenty excluded responses were not included in any further analysis. As well as this, a further eight participants were excluded from the data analysis due to technical errors. This resulted in a total of sixty-three participant’s being included in the data analysis. Their remaining response times were then averaged to produce a total of six means (one for each condition), these means are shown in figure 1.

In contrast, there was no significant main effect of relatedness, F (1,62) = .125, p = .725, (M for related = 877, M for unrelated = 876) proposing the idea that participants naming response time did not differ significantly regardless of whether the word was related or unrelated to the distractor.

A significant interaction was found between type and relatedness F (2,124) =6.444, p = .002, this imply that the type of the distracter had a different effect on naming response in the related and unrelated condition. This suggest that the effect of relatedness is different for the different levels of type.

Figure 1: Means and standard deviations for each independent variable 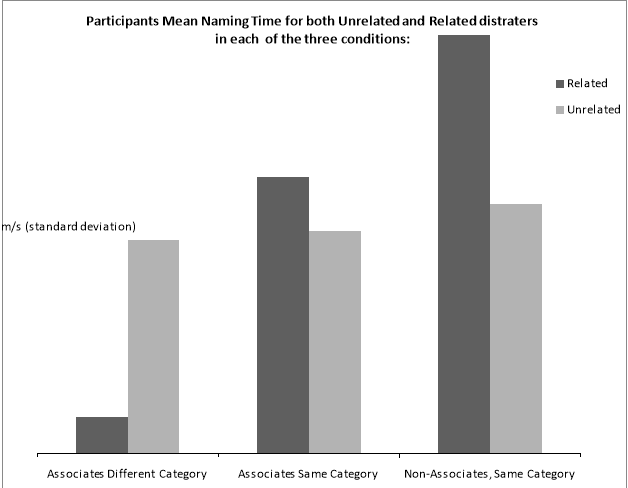 The interference effect found in these results can be explained by the selection by competition hypothesis. This hypothesis suggest that when attempting to name a stimulus semantically related words will also be activated. This activation of multiple words lead to competition, the word that receives the most activation will eventually be produced but the initial competition causes a delay in the selection process. Although this hypothesis successfully explains why interference occur it does not explain why distractors that are associated to the stimulus facilitate participant’s performance.

Reolofs (1992) developed two assumptions to explain why interference and facilitation effects occur. His first assume that when the target and distracter words are semantically related there are higher activation levels in these words which interfere with participant’s performance. The second assumption proposes the idea that selection competition is restricted to items that are from the same response set. This theory would assume that those words that were associates but not related to the stimuli would not enter in to the lexical competition but may still activate the target words, resulting in facilitation.

The response exclusion hypothesis (Mahon, Costa, Peterson, Vargas & Caramazza, 2007) also provides a further explanation as to why these different effects occur. Mahon et al (2007), proposed the idea that there is a single channel speech output buffer where only one word can be produced at a time. They suggested that there is a response relevant criteria which attempts to exclude all non-target words from entering the buffer. Those words which are not from the same semantic category will be faster to exclude than those is same semantic category. As these non-related words do not enter the buffer it makes it easier for participants to produce the target word.

It is difficult to conclude why distractor words that are both semantically related and associated to the stimulus has no effect on participants performance. It can be assumed that as the word is associated to the stimulus it is attempting to facilitate performance but as it also is semantically related it is competing for lexical competition, thus, working in opposite direction leads them to balance out one another.

The findings from this study are consistent with previous studies such as Costa, Alario, and Caramazza (2005). This results of this primary study replicate what has previously been found in that words from the same semantic category produce interference whereas associates can lead to facilitation. The findings from prior studies and this one, challenge the existing ideas about language production and support the idea that lexical production for spoken naming is not solely result of lexical completion.

Future studies could looked deeper into the effect of distractor words that are associates and semantically related to a stimulus, as what is known about these types of distractor words are vague. When doing this, the study could control for 'word frequency', it is thought that words which are more frequently used are recognised faster than those that are not. These high frequency words are said to have a lower threshold of activation, this may have influenced the results of previous studies. For example in this primary study, it likely that an image of a car would be classified as a high frequency word whereas squirrel may be a low frequency word, resulting car being quicker to name.

Further research could also be conducted on those who are bilingual. Focusing on this specific population will examine whether having more words in your mental lexicon causes greater interference effect and facilitation effect. If a greater interference effect and facilitation effect was found within these individuals it provided greater support and knowledge for what is already known about lexical selection.

Costa, A. A.-X. (2005). On the categorical nature of the semantic interference effect in the picture–word interference paradigm. Psychonomic Bulletin & Review, 125-131.

Mahon, B. Z. (2007). Lexical selection is not by competition: a reinterpretation of semantic interference and facilitation effects in the picture-word interference paradigm. Journal of Experimental Psychology: Learning, Memory, and Cognition, 503-535.