Caffeinated Beverages and their Effects on Attention Performance Tasks

As per the requirements of the study, we will try to understand how the consumptions of energy caffeinated drinks affect the Attention Task performance for participants. We will conduct this test on 20 participants (10 male and 10 female) selected randomly from the University of Michigan- Flint campus. Since the participants in the experiment will be college students, we expect them to be within the age range of 18-25 years. From the initial group, participants will be screened to meet the requirements of the test. The selected 20 participants will be asked to take the Conner’s Continuous Performance Task (Conners, 2004). The Continuous performance test is considered one of the best ways to measure attention and vigilance behavior of participants. This test is also used to identify patients with Attention Deficit and Hyperactivity Disorders. The Continuous Performance Task measures the attention and impulsivity level of the participants.

In this particular experiment we will use the computerized version of the Conner’s Continuous Performance Test III. We will use 20 computers and run this test twice to ensure all participants undergo the process. In this version of the test letters of the alphabet are presented in front of the participants for 250ms, the respondent will be instructed to press the keyboard every time they see the letter ‘X’. There will be six blocks for this test; each of these blocks will contain three sub blocks with 20 letters in them. Therefore there will be eighteen sub blocks and the inter stimulus intervals (ISI) for each sub block will vary from 1-4 seconds, so that the participants will not get used to the pattern of the test. The order of the ISI will be mixed and participants will have no inkling about the order in which the letters will appear. The letters presented to the participants will be large and approximately 1 inch in size. The instructor will ask all participants to read through the test procedure on the computer screen. A small trial of 20 letters will run twice to help participants get used to the procedure. The test will take approximately 15 minutes per participant; therefore we will collect the baseline data for 60 participants in one hour.

All subjects will be paid for participating in the experiment. The data collected from the 60 participants will be on two aspects, the test performance score on Inattentiveness and omission, and reaction times. The data collected will be the dependent variable, while the presence or absence of caffeine in the system will be the independent variable or the repeated measures for the related groups.

We will first run normality tests on the data obtained from the study using IBM SPSS v 22 software. Since the sample size is above 50, we will use the Shapiro Wilk test to understand the distribution of the data since we have sample size of less than 50 individuals. If the data has a single peak, we will use parametric tests like paired sample T-test or repeated measures ANOVA to see how the test scores differ between the two conditions. On the other hand, if the data is not normally distributed, we will use Wilcoxon Signed Rank test to see if there is a difference between the attention performances scores before and after caffeine consumption from the baseline. 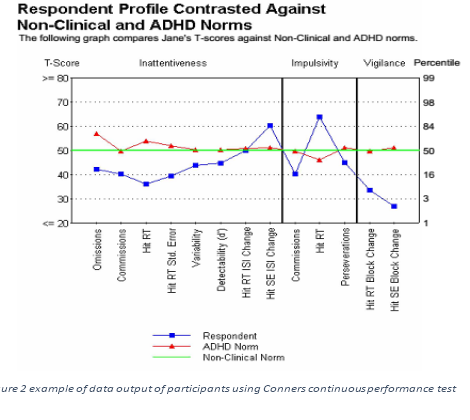 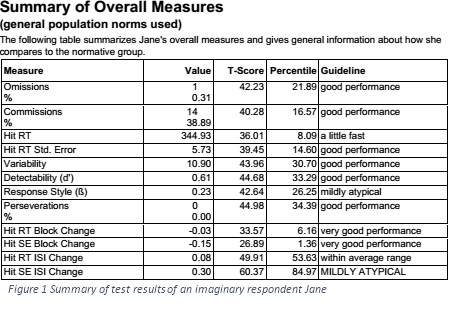 The responses of the participants will be measured in terms of accuracy and response times. Accuracy will be measured in the percentage of ‘X’ detected vs. presented, so the participants will be exposed to different number of ‘X’s at each computer in both trials. The reaction time will be automatically measured by the computer in milliseconds. Data will be generated for each of the 20 partcipants, which will be presented in the form shown in figure 1 and figure 2. The numerical scores as shown in figure 1 will be copied into SPSS software and exploratory and frequentist statistical analyses will be run.

For this experiment, we hypothesize that the caffeine trials will improve the test performance of the participants (n=20). The null Hypothesis for this study (Ho) is that there will be no significant difference in test performance between the two trials.

Over the course of years, a number of studies have tried to ascertain the effects on caffeine on bodily functions. Studies show that in subjects exposed to small amounts of caffeine, the level of alertness increased(Zwyghuizen-Doorenbos, Roehrs, Lipschutz, Timms, & Roth, 1990). Various other studies also looked at the effects of caffeine on the driving alertness of the subjects(Brice & Smith, 2001). There is a significant corpus of literature that exists on the effects of caffeine on the alertness level of human subjects; however we plan to conduct the tests in a more controlled environment. Based on the existing literature review we can predict that the test group will show significant improvement in attention task performance compared to the control group. 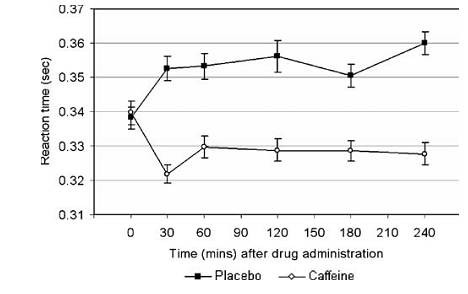 In the below figure we see that in a study by Michael, Johns, Owen, & Patterson, (2008) it was found that the reaction time of participants treated with caffeine dropped within 30 minutes of consumption and stayed lower than the control group even 4 hours after the treatment. Therefore we can see that the caffeine increases alertness and reduces latency in behavior response times in subjects.