Effectiveness of Biofeedback Training on Anxiety

This study investigated the effectiveness of biofeedback training among 70 university students who were randomly allocated to the intervention or the control group. Relative change in skin conductance level (SCL) and Depression Anxiety and Stress Scale (DASS; Lovibond & Lovibond, 1995) scores were measured at pre- and post-intervention. Split-plot ANOVA was used to analyze the results. DAA-21 was directed and SCL changes were measured before and after a car race task. Intervention group were asked to atted eight sessions of training using Wild Divine software. There was significant decrease in relative change of SCL in the intervention group compared to control group. As for DASS, there was a significant different between intervention group and control group too. Limitation and implication were discussed.

Effectiveness of Biofeedback Training on Anxiety among University Students

According to Ratanasiripong, Sverduk, Prince and Hayashino, 2012) mentioned that there was an increase in frequency and severity of psychological symptoms among college students. For instance, undergraduate students nowadays felt frequent pressures especially when their resources to manage are overstretched beyond their limits, their anxiety and stress starts kicking in. Furthermore, anxiety is one such psychological condition on rise amongst student population (Ratanasiripong et al., 2012), for an example, test anxiety (Cook-Vienot & Taylor, 2012). Universities and colleges organize many programs to help out students overcome anxiety in addition offer therapy to those required (Henriques, Keffer, Abrahamson, & Horst, 2011). These programs and therapies compromises relaxation training, meditation, trainings, cognitive-behaviour therapy etc (Pagnini, Manzoni, Castelnuovo, Molinari, 2013). Nevertheless most of these programs are merely a one-time large-scale program or require series of intense training sessions to acquire, with both having high dropout rates (Henriques et al., 2011).

Hence there is a need for effective anxiety training. One intervention effective for the decades is the biofeedback training (Vitasari, Wahab, Herawan, & Sinnadurai, 2011). Biofeedback is a real-time two-way feedback loop between the machine and the user; the user reacts to an action initiated by the system, and the system then reacts based on the participants’ physical/emotional reaction (Champion & Dekker, 2011). Biofeedback training helps alleviate anxiety symptoms by making aware of the psychophysiological symptoms of anxiety, such as, sweaty palms, cold, nervous, panic, breathing fast, heartbeat racing, and abdominal pain , followed by learning to control the response, and finally by transferring the control of response to everyday life, by consciously being aware of one’s psychophysiological symptoms (Henriques et al., 2011).

With emergent accessibility to technological advances and the continually increasing number of population playing games in their computer and phones, game-based biofeedback is a relevant treatment for anxiety symptoms amongst young children and adults (Knox, Lentini, Cummings, McGrady, Whearty, Sancrant, 2011). Game-based biofeedback would be appealingly more motivating and entertaining, given the prevalence in youth culture, drop outs are less likely. On the other hand, very scarce literature exist on effectiveness of biofeedback assisted relaxation training using gaming technology in young adult population (Knox et al., 2011). A study conducted by ………………..

The design was a 2x2 (Time x Condition) facial experiment conducted over a 10 week frame. The independent variables were the condition, intervention group that received biofeedback training, and the control group, and the time; Time 1 before training, and Time 2, after training. The dependent variables are relative change of SCL, and the DASS score. At each time point baseline and test readings for SCL were collected whereas DASS was only measured once per time point.

A mixed between within subjects analysis of variance were conducted to assess the impact of biofeedback training condition (intervention group, control group) on participants score on relative change in SCL and DASS respectively across two time periods (pre-intervention; Time 1, post-intervention Time 2). Multiple independent and paired-sample t-tests were also conducted as post-hoc tests for interaction effects for both the mixed analysis.

A total number of 70 students participated in this study; 36 female and 34 males (M = , SD = ). All were final year undergraduate university students. All participants were randomly allocated to either intervention group or control group. A total of 35 participants were present in each group/condition. Convenience sampling was used as it was beyond the capacity of the researchers to conduct random sampling.

A shortened, 21-item, DASS (refer to Appendix A) was used to measure mainly anxiety, stress, and depression. The high test-retest reliability for depression, anxiety, and stress are r = .71, r=.79, and r=.81 respectively. Validity was established by the high correlation between DASS with Beck Anxiety Inventory (BAI; r = .81), and Beck Depression Scale (BDI; r = .74) for anxiety and depression subscales respectively.

Wild Divine multimedia biofeedback training software, installed on an HP laptop computer running Windows 7 was used along with the IOM, an electronic biofeedback monitor ( model: HR001.1) comprised of three finger sensors; one to measure heart rate, the other two to measure SCL. It should be noted here that only the two skin conductance sensors were used in this experiment. More information about these equipment can be found online at: www.wilddivine.com

Participants were given informed consent forms to sign. They were informed that the participation was on voluntary basis and they had the right to withdraw from the study anytime they wished to. They were also informed about the confidentiality of study. Thus this study took place after ethical approval.

Once the students agreed to participate, on week one the participants completed the DASS. Then the experimenter recorded the baseline electrodermal activity or SCL. This was done by attaching the participant’s index and ring fingers of their non-dominant hand with pads of their fingers rested inside the sensors with the flaps going over fingernails. Participant’s hand was wrapped in a soft cloth to keep the hand warm and promote sweat gland activity. They were asked to relax quietly for 5 minutes to record mean baseline SCL.

Following that, participants were asked to complete a test in the form of a car race, where the experimenters will monitor their performance. Their goal was to overtake all the other cars. They were also told that the car will go faster when relaxed and slower when anxious they are. They were not instructed on how to control their anxiety level this time.

The mean SCL was recorded during the test phase. The experimenters randomly allocated the participants into either the intervention or control group. Basically, the car racing was connected to the electronic biofeedback monitor, the car moved faster when the player was relaxed and slowed down when anxious indicated by SCL.

For the next eight weeks, participants in the intervention group attended a one-hour weekly training program using the Wild Divine biofeedback programme. They were taught how to control their body’s physiological responses (specifically, SCL and heart rate) through breathing exercises and relaxation skills by receiving a real-time feedback on their SCL and heart rate (i.e., biofeedback) so that they could track their performance. The control group participants simply attended their normal classes. On week 10, procedures conducted in week 1 were repeated.

Figure 1. Mean relative change of SCL between intervention and control group from Time 1 to Time 2 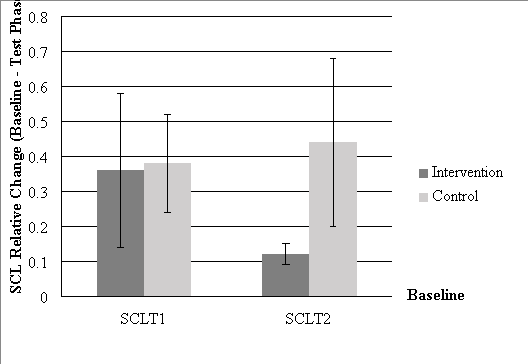 Figure 2. Mean DASS score between intervention and control group from Time 1 to Time 2 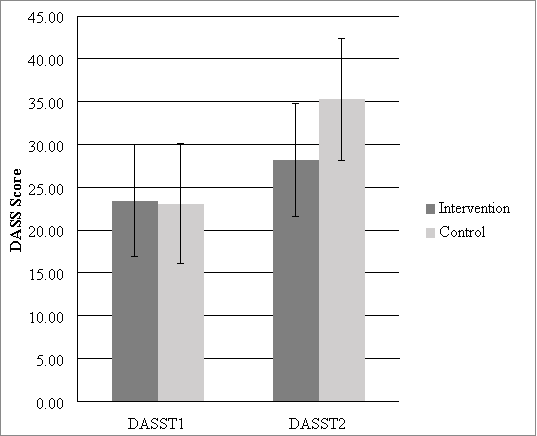