Effect of Word Combinations on Accuracy and Response Time

Throughout our daily lives, we tend to display many behaviors that are considered automatic. The Stroop effect has been replicated numerous times to help study the phenomenon of automatic behaviors, since John Ridley Stroop's original findings. The goal of this experiment was to study the reaction time and accuracy on congruent and incongruent word combinations. The congruent words were of colors spelt out, that were displayed in that same color (e.g., the word green was written in the color green). The incongruent words were of colors spelt out, that were not displayed in the same color (e.g., the word green was written in red. During this experiment, 19 undergraduate male and female college students (average age of 22.5 years old) participated as part of a classroom requirement. Each participant was given an instruction sheet which directed them to perform a Stroop task on a computer to measure their reaction time and accuracy for the congruent and incongruent words. Based on the results, the participants had a significantly faster reaction time with the congruent words than the incongruent words. However, their accuracy of recognizing congruent words had no significant difference than incongruent words. Therefore, these results can relate to Stroop's original research. It can be said that the learned automatic behavior of reading the different word combinations, does not interfere with the task at hand, but does interfere with the response time.

During our everyday lives, we display many behaviors that cognitive psychologists considered to be automatic. An automatic behavior is a type of skill that does not need direct interaction to perform the task at hand. Some good examples of these types of behaviors are reading and writing. Cognitive psychologists like to study the properties of these automatic behaviors by creating situations where an automized response will conflict with the researchers desired behavior. This type of situation can be studied by the Stroop effect. The Stroop effect was an experiment originally conducted by John Ridley Stroop in 1935. During this experiment, Stroop studied the relationship between the interference and reaction time of a task. This phenomenon that Stroop studied has been used in various ways since his original experiment to measure and assess many different cognitive abilities in human beings.

After Stroop conducted his study, he wrote an article to explain his findings. In that article, he talked about two experiments which he conducted to study this phenomenon. He believed that the reaction time between the response and the stimulus would increase when the word and the color of the word itself were not the same. He also believed that the reaction time would decrease when the color of the word and the actual word were the same (Stroop, 1992). During the first experiment, Stroop used 70 undergraduate college students as his participants; the second experiment consisted of 100 college students. When compared to just reading the word written, Stroop found that it took the students a longer time to complete the task of saying the correct color that the word was written in, instead of reading the actual word (Stroop, 1992).

The participants in this experiment consisted of 19 undergraduate college students at a four year school; there were 15 females and four males. The mean average age for these participants was 22.5 years old, with a standard deviation of 3.2 years old. All of the participants were familiar with using a computer, keyboard, internet, and a mouse. They were not compensated for their time because it was a required class experiment. The participants all had normal to corrected vision and had normal color vision. They also had fine motor skills within normal limits.

The materials that were used during this experiment was a Dell desktop personal computer with internet access, running on Microsoft Windows to perform the Stroop test on. A mouse was used to navigate around the computer, as well as a keyboard to enter the responses for the test. There was a flat desk which the computer was on and a chair for the participant to sit in while taking the test. Each participant received an instructions sheet telling them step by step what needed to be done by them during the experiment.

The next set directions on the instruction sheet were to fix the settings once the internet loaded the main black screen. The first trial settings were to be changed by clicking on the correct items listed on the sheet. They were to be changed to the following; condition = congruent words, colors used = red, green, blue, and yellow, respond to color, do not limit stroop time, number of words in condition = 25, font size = 20, location of word = in the center. After fixing all these settings, the instructions then directed the participant to press the space bar to start. It also stated in the instructions to watch for the word which would appear in the center of the screen and to use the keyboard to respond. The words that appeared in the middle of the screen were colors spelt out, that were displayed in that same color (e.g., the word green was written in the color green). These were the congruent word combinations. Therefore, the instruction sheet explained to use the response keys for those words to the color of font they are for; r for red, y for yellow, b for blue, and g for green. After completing the trial for congruent words, the participants reaction time, and accuracy results were shown on the screen. The instructions directed the participant to record their reaction time and accuracy in milliseconds.

After recording their data, the instructions then directed them to close the window back to the main black Stroop Experiment screen and conduct the second trial for incongruent words. Everything else stayed the same as far as settings go. Then the instructions directed the participant to select done at the bottom of the screen to start the second trial. It also reminded them that in this condition, the words and the colors were different and to respond to the color they saw, instead of the word they were reading. Once this trial was over, the instructions directed the participants to record their reaction time and accuracy.

After completing both parts of this experiment, the participant closed out the internet and left the separate computer room for the next participant. Each participant was told to write their results on the same sheet of paper. This sheet was sectioned off into four separate columns so that the results could be organized under congruent and incongruent reaction time and accuracy. Then a within subjects t-test was conducted at an alpha level of 0.05.

It was originally predicted that the reaction time for the congruent condition would be significantly faster than the reaction time for the incongruent condition. It was also believed that the accuracy for the congruent condition would be significantly more accurate than the incongruent condition. This was predicted because reading is something that we do every day of our lives. Therefore, the behavior of reading comes automatically to us without us having to really think about the task. In relation to this experiment, reading the word and seeing it displayed in the same color, made it easier for the participants to be accurate in their reaction, as well as be swift about it. Whereas, when the participants were asked to respond to the color, and not to the word they were naturally inclined to read, it took longer for them to respond, but did not seem to effect the level of accuracy.

What was done in this experiment relates to Stroop's original experiment. This is because he believed the reaction time between his participant's response time was going to increase when the word and the color of the word itself were not the same (Stroop, 1992). Which is also what was believed to be true in this experiment, and was found to be true. Stroop also believed that the reaction time would decrease when the color of the word and the actual word were the same. Which is what this experiment showed to be true as well. The results between the two experiments, even though they are about 80 years apart from each other, have very similar findings. They are also similar because both experiments used undergraduate college students as their participants. Using similar participants can help create more control and reliability of an experiment.

In Konkle and Oliva's study, they conducted a similar Stroop task as well. They wanted to see their participant's reaction time and accuracy when identifying the size of an object in the real-word. They visually showed their conditions to their participants, like the other experiments talked about. Since their findings showed that the reaction time for their incongruent conditions was longer than their congruent conditions, it also shows signs of interference (Konkle and Oliva, 2012). They too used college students and had findings similar to all the other experiments, which again, could show that using similar participants for similar studies can be beneficial.

There were a couple procedures that could have been improved throughout this experiment to create more control, internal validity, and reliability. Some participants know how to type on a keyboard without looking at the keys, whereas there are other who don't. This causes a threat to the reaction time, as well as accuracy. Some people might have taken longer responding because they needed to look down at the keys. It can pose a threat to accuracy because someone might have pressed the wrong key by not looking when they were not that familiar with the keyboard, as other may be. What could have been done in order to try and make this as equal for each participant as possible, was to have them still use the computer monitor, but only have four buttons on the desk for them to use to respond. If this was how the experiment was conducted, the settings on the computer would need to be fixed prior to the experiment. This too could have caused less control during the experiment. Some people may have entered the wrong setting in the beginning and did not realize it.

Since it was found in this experiment that the reaction time for the congruent words was significantly faster than the incongruent words, it can be connected to a person's response time during other activities. For example, if all of a sudden the colors to the traffic lights were changed, and we were taught what the new colors represented, most people would have a slower reaction time responding to the action the lights now incur. These findings show how our well-learned automatic behaviors can be inhibited when it naturally wants to occur, if our brain is working against it. 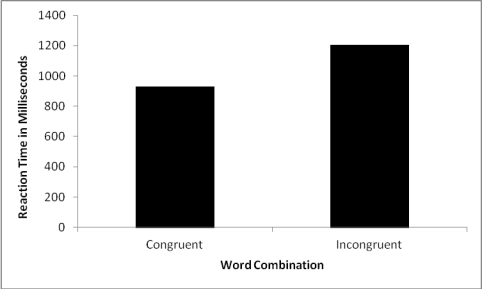 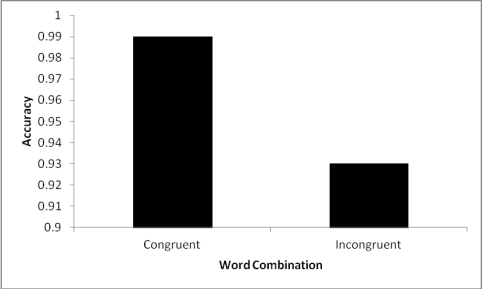