Effect of Levels of Processing on Memory Recall

Report Four: An experimental study of the effect of levels of processing on memory recall.

By utilising an opportunity sample of friends and family (N=42, M=27.45, SD=11.94, aged 16 to 63) of students from the University of Wales Trinity Saint David (Swansea), this study set out to demonstrate Craik and Lockhart’s (1972) level of processing, through the medium of incidental learning, in which material is learnt by a participant, even though the participant was not expecting to be tested (Jenkins, 1974). After completing a filter task of counting three sets of words, from three word lists, that matched three conditions (orthographic, phonological and semantic), the participants were asked to list as many words as they could remember. As predicted, these results clearly show a difference in recall between all three groups (phonological, semantic and orthographic), with the variance between each condition bring homogenous (P>.05) and significant (f(2,82)=26.15, p<.001). These differences are in line with the study’s hypothesis.

Craik and Lockhart’s (1972) describes memory recall in terms of level of processing, the shallower the processing the more fragile the memory and the more susceptible to decay. Unlike Atkinson and Shiffrin’s (1968) multi store model, there is no long and short term memory, in this theory short and long term stores refers to a permanent structural components of the memory system (Gross, 2008), and memories are formed as a by-product of the level of processing (Craik, 2002).

Although, Craik and Lockhart (1972) suggest that level of processing cannot be counted as a theory of memory, but a heuristic framework, in which memory encoding, retention and retrieval can be studied. Be it a framework or theory, level of processing is mainly concerned with encoding of the information to be learnt and the relationship between how the information is processed and remembered (Baddeley, 1999).

Craik and Tulving (1975) found that memory recall is significantly better when the meaning of a word is encoded rather than the structure, whereas Graf and Ryan (1990) suggests recall of information is dramatically improved if the mental processes that occurred whilst encoding the information match those while retrieving the information. Crucially, Craik and Tulving (1975), Graf and Ryan (1990) and Challis (1993) suggest that rehearsal of the material did not help with recall, although the Maki and Schuler (1980) experiment agreed with Craik and Tulving (1975), Maki and Schuler (1980) did find that longer rehearsal times did lead to better retention.

Within the Schuler (1980) experiment, Schuler (1980) examined both effects, the level of processing, and length of time the participant had to rehearse, and although rehearsal times were indirectly linked to the position of the target word within a word list, and therefore it is not known if one word had longer rehearsal times than others (Craik, 2002) however, it may suggest level of processing is not the only factor of memory (Craik, 2002).

Based upon the literature reviewed this study will investigate Craik and Lockhart’s (1972) level of processing. The idea of this study was to examine the idea that long term memory is not a simple storage unit, as proposed by Atkinson and Shiffrin’s (1968), but in fact is a complex processing system (Craik & Tulving, 1975). This study demonstrated Craik and Lockhart’s (1972) level of processing through the medium of incidental learning, in which material is learnt by a participant, even though the participant was not expecting to be tested and therefore unlikely to have rehearsed the material (Jenkins, 1974). Whilst highlighting the way in which elaboration requires deeper processing can aid memory retention and recall (Craik & Tulving, 1975).

The study utilised repeated measures design, in which every participant followed the same procedure. The study manipulated the independent variable (level of processing), which had three conditions (orthographic, phonological and semantic) to record their effect on the dependent variable, the recall.

The main material utilised in this study was a laptop running a Microsoft PowerPoint (Appendix C). This option was decided upon because of Microsoft PowerPoint’s ability to auto-advance a slide, to the next slide, after a pre-set time delay. The Microsoft PowerPoint presentation also included the instructions, which allowed the study to be conducted with no distractions. When all the slides had been shown, the participant would write their recall on a piece of paper.

In order to comply with BPS ethical framework (British Psychology Society, 2009) consent from each and every participant was collected via a consent form (Appendix D).

Upon greeting the participant it is ethically correct to get the participant’s informed consent, although in this case, it is important that the participant did not know they will be asked to recall as many words as possible at the end of the study. As with this knowledge the participant may consciously put more effect in to remembering the three sets of eight words.

After a completion of a filter task in which the participant recalled the number of phonological, semantic and orthographic words, the participant completed the task by recalling all of the words they could remember from those slides.

Upon completion the participant was debriefed and informed of the full nature of the task they had completed, and the theory behind the study. Every participant was given the choice to have their data removed from the study, although no participant wished to do so. 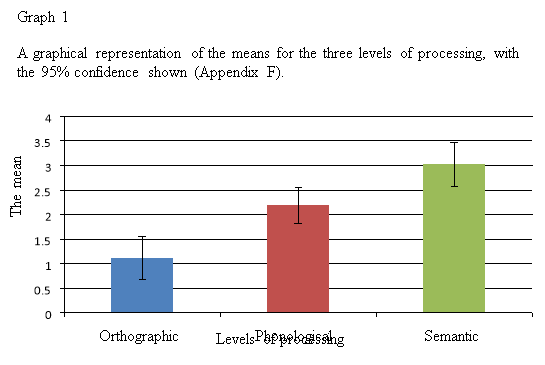 In order to determine if the results were significant, a one way Anova test was performed on the data (Appendix G). With the variance between each condition bring homogenous (P>.05) and significant (f(2,82)=26.15, p<.001) results clearly shows that there are three distinct levels of processing with three corresponding levels of recall and as the level of processing increased so did the number of words recalled. Therefore the hypothesis is accepted.

This study returned a significant positive result, providing evidence for the support of the main hypothesis and is in line with Craik and Lockhart’s (1972) level of processing framework, in which memories can be formed by how much processing the information requires.

These results clearly show a significant difference in recall between all three groups (phonological, semantic and orthographic). These differences are in line with the hypothesis, in which the set of words with the highest level of processing (semantic) would yield a better recall result than phonological recall, which in turn would yield better recall than orthographic (lowest level of processing), and therefore are in line with many studies, including studies by Craik and Lockhart.

Craik and Lockhart (1972) hypothesised that any information processing as under the control of a central processor. Any retention of information depends on how the central processor was used during learning (Gross, 2008), as the results of this study show, the deeper the level of processing, the better the retention and recall. This study did not test a central idea, in which the nature of the processing response is directly related to the original task (Parkin, 1993). For example in this study the participants were asked to count the words in capitals (Appendix C, Slide seven) and therefore on that slide, the participant’s processing capabilities may have been restricted to the orthographic level (Craik & Lockhart, 1972).

This study does have its own limitations; the study did not engage in counter balancing the order in which the slides were shown. All three of the word slides (Appendix C, Slides three, five and seven) were shown in the same order for all of the participants. With a delay of over 24 seconds from the Slide three to the end of the presentation, it is possible that the delay had an effect on recall.

Whilst Hyde and Jenkins (1973) suggest there may be other factors that helped the participant’s recall, this includes, words that are pleasant and words that are used more often both produce a significantly higher retention, and Parkin (1993) observed that two words that are related to each other, recall of the first word helps the recall of the second word.

Craik and Lockhart’s (1972) level of processing had a huge impact on memory research (Rutherford, 2005); although today most psychologists believe that the framework is over simplified (Gross, 2008). Prior to Craik and Lockhart (1972) the nature of memory mostly pivoted around the structures holding the information (Rutherford, 2005). Many psychologists paid little attention to the relationship between perception and memory, or to how the learning process can affect retention (Gross, 2008). Although, level of processing as a framework showed the variations in encoding that could occur (Rutherford, 2005), there have been many attempts to extend or modify the level of processing model to include elaboration and distinctiveness (Eysenck & Keane, 1995). 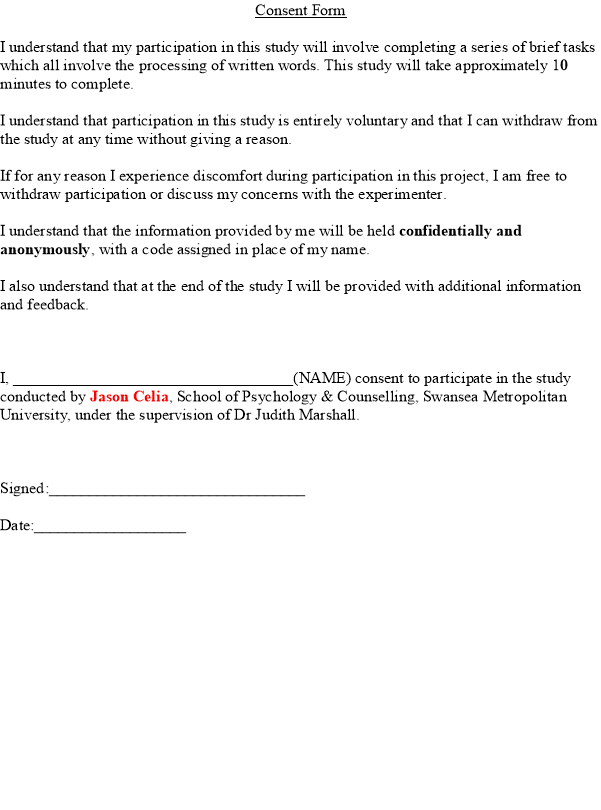