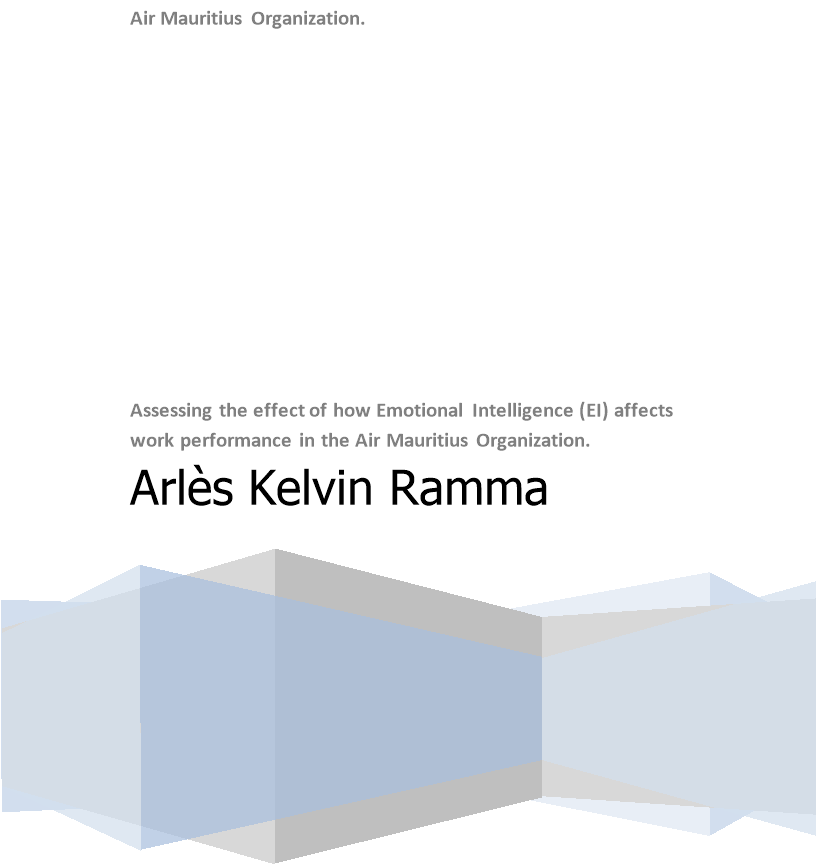 Nowadays, in this world of rapid change, organizations always want to compete so as to achieve a high level of productivity and to be at the top. The companies will need performing employees to uplift the organization. Air Mauritius is a big travelling organization where there are highly competitive works environments in every department. Employees need to do their maximum efforts for the company benefits. Job performance is an important factor which needs to be considered in an organization. Job performance is related to workers tasks and the progress of the organization. There are many factors that influence a company such as leadership, abilities and competencies, misunderstandings between executives, cultures and values.

Years ago, Intelligence Quotient (IQ) was vital in both private and public sectors. Despite all qualifications, diplomas, and degrees holders being employed in their particular field, work performance was not well structured and not always successful as executives could not cope with high pressure and stress, so workers are not able to attain high level of maintenance. Therefore, to alleviate this situation, Emotional Intelligence became the crucial point of view in organizations as EI will help workers to manage stress, control self emotions and pressures, to keep a positive spirit and to ensure a good performance even while facing work complications.

Organization frequently used Intelligence Quotient (IQ) to recruit people depending on their qualifications related to the post available. However, to cope with this problem that many companies are passing through, Emotional Quotient (EQ) is the only solution to the situation and is of utmost importance to an organization to succeed. Emotional Intelligence (EI), the capabilities involving identification and the control of emotions in one-self and others, using this information to guide one’s thinking and behavior (Giardini & Frese, 2008; Mayer, Salovey, & Caruso, 2008). Emotional Intelligence (EI) is an ability to know our own and others feeling for inciting our self and for dealing with own emotions, both internal and external (Daniel Goleman, 1995). The research is being done on Air Mauritius Company employees.

Air Mauritius uses IQ for hiring process, based on candidate’s qualifications. Employees are having problems such as health, financial and are bored with their specific task leading to absences. This is so, as a lot of pressures are being exerted on employees like stress, team pressure, misunderstanding between colleagues, no profit in the company, bad communication skills and sharing among executives and also the manager. However, to overcome obstacles of competitiveness, EI is the best solution to adopt in favor of both the employees and the organization. The managers and executives, who can alter their emotions in an efficient way, are more successful on job.

This research aims at recognizing and evaluating the effects of Emotional Intelligence on work performance of employees at Air Mauritius organization. Thus, objectives of this current study links between EI and performance at work field. In order to achieve high level of competencies which result an incline in accomplishments of the organization, executives will have to develop and explore EI.

Upon completing this research, a clearer understanding of EI on work performance of executives was detected. Understanding how various aspects impact performance and organization survival could help in revolutionizing the ways of performing at work place for better results. Another effect of this quest will be how to promote more reliability of executives, like incentives to encourage employees, team works and shift works to know how each work and colleagues are important in the company, for them to meet their own goals and for the organization success.

(Goleman, 1998) made a bodywork of Emotional Intelligence (EI) that mirrors how a person's capacity for understanding the skills of self-awareness, self-management are personal competence, social-awareness and relationship management are social adept related to work success. Firstly, the main point is emotional self-awareness, which constitute of self-awareness, accurate self-assessment and self-confident. Therefore, it is understand that knowing one’s internal states, preferences, resources and intuitions is important. (Mayer & Geher, 1996) stated that EI (Emotional Intelligence) differs from IQ (Intelligence Quotient). John Mayer (for illustration, Mayer & Stevens, 1994) uses the term of different moods, the affective analogue of meta-cognition for key aspect of Emotional awareness. The second factor of EI, self-management, that holds Emotional self-control, transparency, adaptability and achievement orientation. The means of this factor is the ability to manage oneself anxiety, anger and to manipulate internal states and resources. It can also help to inhibit emotional impulsivity. Thirdly, another element of Emotional Intelligence is social-awareness, including apprehension of others’ feelings, concerns and needs. It encloses the competency of empathy involving the amygdala. The amygdala is a part of the limbic system found deep in the brain’s temporal lobe. Studies of patients with discrete injuries to the amygdala manifest deterioration to read non-verbal cues for negative emotions, especially to fear and anger, and in judging the honesty of people (Davidson et al., 2000). Lastly, the fourth EI component produces a complex image, or skillful at inducing desirable responses in others, are the relationship management and social skill adept. In an intrinsic sense, the success of our relationship depends on our capability to adjust ourselves or to influence emotions of another person. This feature, encompasses developing others, inspirational leadership, influence, conflict management, teamwork and collaboration. Furthermore, (Mayer & Salovey, 1997) showed that Emotional Intelligence consists of four distinct features: 1) Evaluation and expression of emotion in the self. 2) Evaluation and recognition of emotion in others. 3) Control of emotion in oneself. 4) Use of emotion to ease performance. (Bar-On, 1997) conceptualized Emotional Intelligence as a non-cognitive ability; including five vast skill areas that help an individual to become more productive to tackle with environmental demands and pressures, these are Intrapersonal skills, Interpersonal skills, Adaptability, Stress management and General mood. Intrapersonal skills are related to pinpoint, understand and self-expression. Interpersonal skills are to be aware of, to understand and relate to others. Adaptability is related to strong emotions and be able to control one-self. Stress management is related to control stress of confrontation to different situations. General mood is related to adapt to changes and to elucidate problems of personal or social nature. Emotional Quotient (EQ), has four abilities suggested by (Davies et al., 1998) such as self emotional evaluation, others’ emotional evaluation, regulation and use of emotion. (Salovey et al., 2000) have claimed that EI elements are in relationship to a number of coping processes, like thoughts, social support networks and the disclosure of trauma. (Wong & Law, 2002) have argued that EI consists of four aspects: use of emotion, others’ emotional appraisal, self-emotion appraisal and regulation of emotion. Cote & Miners (2006), separated EI into emotion perception, emotion utilization, emotion understanding and emotion control. Goleman (2006), revealed that EI concerns the ability of an individual to maintain enthusiasm, self-control, self-encouragement and persistence, as stated in five major facets: Knowing your emotions, managing your emotions, motivate yourself, recognizing and understanding others’ emotions and handling relationships.

Nowadays, Interpersonal interaction is required in organization. The majority of these interactions, are linked to work performance. (Savoie & Brunet, 2000), proposed that group performance appraisal should consist a minimum of four different components:

Concentrating on Emotional Intelligence (EI) as an utmost factor associated to performance, with current researchers’ reviews a number of studies of drivers of organization performance. Numerous research have detected that EI is related with a number of positive results in the workplace which are affecting components such as leadership (Scott-Halsell et al., 2008), (Bar-On et al., 2000; Mikolajczak et al., 2007) resistance to stress, work attitude (Carmeli, 2003), (Kafetsios & Zampetakis, 2008; Law et al., 2008; Wong & Law, 2002) job satisfaction and performance, (Zhou & George, 2003) employees inventiveness and career achievement (Dulewitz & Higgs, 1999). In recent years, many researches have been carried out and researches argued that Intelligent Quotient is not the main Emotional Intelligence (EI) that led to outstanding accomplishment at task. Moreover, researchers found that EI has an affirmative and important relation with performance (Goleman, 1998; Mount, 2006). (Patnaik et al., 2010) explored the coherence between EI and work performance of executives of the Cooperative bank of Gramya Banks in Odisha. Their investigation exposed high EQ is mandatory for better work performance. Nevertheless, high EQ cannot be the only necessity for performance improvement on the task. In addition, (Usman, 2011) analyzed the relationship among employees’ EI and their performance in Pakistan. The outcomes showed quite high connection between EI and organizational citizenship behavior and employees work performance might be estimated significantly based on their EI scores.

Focusing on these literature reviews, a deduction can be drawn that it exist a relationship between EI and job performance of employees in an organization or company. At the same time, Emotional Intelligence (EI), may promote the manager performance in work and increases organizational achievement.

The universe for this research will be assessed on different sectors in the Air Mauritius Company. It is to be noted that information will be collected, through a questionnaire filled by both gender participants. The survey will target directors, managers, and employees. First of all, a group of 20 employees including both 9 males and 11 females are selected at random. A pilot test questionnaire will be distributed and collected after one hour from the 20 employees. This is to have an idea if the employees are understanding the written questions clearly and able to answer. If some of the randomly selected executives are having trouble in filling the questionnaire, modification need to done in the survey like to alter the structures making question easier. The question papers, will not contain questions that influence the employees to answer against their will.

The new questionnaire that is more reliable will be scattered to a number of 100 employees consisting of 45 males and 55 females through stratified random sample. Incomplete questionnaires will be rejected as there due to lack of informations.

In this study, job performance is dependent variable and EI is independent variable. In order to appraise the EI of the sample, Emotional Intelligence scale constructed by (Schutte et al., 1998) is used. The apparatus holds 33 items using a 5-point Likert scale, in which 1 represents ‘strongly disagree’ and 5 ‘strongly agree’. The totality scoring mark may be in the interval 33 to 165 and the high scores point out employees’ higher aptitude to identify and cope with emotions. The stuffs of the scale are directly proportional to the theory of EI. It takes into account alertness, emotional stability, integrity, enthusiasm, empathy, value-orientation, managing relations, self-development, commitment and altruistic manner. Finally, this measure is chosen because it is readily accessible and usually used.