Standard personality testing is the name given to any form of test designed to determine different aspects of the subjects’ personality or emotional state (Merriam-webster.com, (2014). This is achieved through the designing of many smaller tasks such as questions within a questionnaire. The vast majority of these tests are designed by western psychologists, which creates an issue when they are administered to Indigenous peoples such as the Tsimane tribe and the Indigenous of the Philippines, as the values held by the differing societies are varied and therefore the tests do not measure all facets of their personality, notable problems arise from differences in culture and language. This paper will focus in particular on one standardized personality test, the Five Factor Model (FFM) that is commonly referred to as the OCEAN testing as it tests Openness, Conscientiousness, Extraversion, Agreeableness and Neuroticism(Goldberg, 1990,)

, each with smaller sub-categories referred to as facets. Although it is said to be fairly robust cross culturally the test is still synthesized for western use. This paper will assess the appropriateness of using the FFM of testing on Indigenous peoples such as Aboriginal Australians and the Tsimane tribe.

As the FFM was established by … , a western psychologist, in …. And since then, debate has arisen in regards to the appropriateness of using this testing on Indigenous cultures. There are two main concerns when it comes to appropriateness, the difference in traits and behavior between cultures, and researchers basing their experiments of western qualities (Church, in press; Enriquez, 1979). To attempt to address these concerns, an experiment was conducted on the Tsimane people. To ensure this testing was reliable the test was translated to Spanish by translators. The test was conducted from Jan 2009 to December 2010 and was taken by 632 adults 48% female and 52% male. The administrative researchers faced many issues due to the alteration of words that had no equivalent in Spanish.

Problems occurred with specific questions during the study due to interpretation of language, four items proved to be difficult to translate, whilst one was removed. The removal of question 30 ( “has an active imagination” ) encompass the main barrier affecting the experiment, this being the interpretation of Tsimane language and their specific phrases. There was no term that would be consistently understood by the tsiname people, highlighting the tester’s lack of cultural competence. Although attempting to properly convey the questions through the use of bilingual speakers of Spanish and English, the translators were not able to. (Ramírez-Esparza, Gosling, Benet-Martínez, Potter, & Pennebaker, 2006).(3)

Overall the success of the five-factor model was generally low in relation to the indigenous group Tismane. Internal reliability proved to be a problem. Out of the five factors 4 factors tested moderately reliable where as neuroticism tested low on Cronbachs scale at 0.31. . Overall the lack of understanding between researchers and respondents mainly language played a pivotal role in the result area. The modified FFM although producing moderate results did not reach appropriate standards of the Cronbachs scale. It is shown that a standardized model does not work efficiently with the Tsimane group, highlighting the inappropriateness of using standardized testing on indigenous populations.

A test was conducted in the Phillippines to determine how imported personality test would fair when administered to indigenous societies, and if the NEO–PI–R (Costa & McCrae, 1992) a western personality psychometric, would generate similar scores in the Philippines in comparison to the American scores. The test was administered to 511 university students. Four tests were used three of which were indigenous test being (along with sample sizes) “Panukat ng Pagkataong Pilipino(PPP;n= 387),Panukat ng Mga Katangian ng Personalidad(PKP;n= 413),Panukat ng Ugali at Pagkatao(PUP;n= 386), and one being westernized, Filipino NEO–PI–R (n= 398)” (Katigbak, Church, Guanzon-Lape\~na, Carlota & del Pilar, 2002)

The NEO–PI–R (Costa & McCrae, 1992) is comprised of 5 factors, coinciding with the BigFivedimensions, along with 6 facet per domain. McCrae et al. (1998). The sample obtained by (Katigbak, Church, Guanzon-Lape\~na, Carlota & del Pilar, 2002) provided medium to high internal reliability in relation to the 6 facets of the 5 factors, however the median alpha was low (.61) in comparison to the result of (.70) reported by McCrae et al. The Openness to Values and Openess to feelings facets scored results of (a=. 22) and (a=. 44) , highlighting the disparity between certain test items and its ability to measure the Philippines social dimensions. Problems arose due to translation equivalency in relation to 8 of the facet scales where correlation proved to be an issue with items. (Katigbak, Church, Guanzon-Lape\~na, Carlota & del Pilar, 2002)

The PPP consists of 210 items along with 19 scales. The basis of the personality constructs were derived from verbal descriptions of traits and behaviours by Filipino respondents and literature specific to their heritage by Carlota (1985), it was then categorized by Carlota (1985) into three groups, (interpersonal, personal and intellect).

Creators of PUP designed the test to gauge Filipino traits, and behaviours (Enriquez &Guanzon, 1985). The PUP was created using Filipino specific proverbs, Filipino dictionaries and interviews with university students..(Katigbak, Church, Guanzon-Lape\~na, Carlota & del Pilar, 2002). It is to be noted however that the PUP scale has had no reliable data from previous experiments. Researches used 8 of the 19 original items, 5 of which were related to well being and religious behaviours, and 3 related to taboo acts of the the Philippines culture

The PKP consists of 253 items. (Katigbak, Church, Guanzon-Lape\~na, Carlota & del Pilar, 2002) The test was created through the use of a lexical approach which allows the PKP to generate a sense of internal reliability.(Church,Katigbak, & Reyes, 1996) The information is derived directly from the correspondents, these being Filipino university students and judges. The test provided a reliability range of (.85-.95) (Churchet al. (1998)

The results of The PUP proved to be unreliable and therefore not included in the results table, the use of joint factor analysis showed several similarities and differences between the NEO PI-V, PKP and PPP. The PKP test showed several connections with three of the Big Five Dimensions, this being the factors agreeableness Conscientiousness Extraversion however the religiosity scale only showed medium reliability as the NEO-PI-V does not have religiosity as a component, highlighting the need for further augmentation of the Five Factor Model to asses religiosity. The PPP test showed a resemblance to four factors of the Five Factor Model, however no neuroticism dimension was found through analysis of the PPP scale alone. In most of the tests the indigenous instruments provided higher validity in comparison to the imported NEO-PI-R. (Katigbak, Church, Guanzon-Lape\~na, Carlota & del Pilar, 2002). The Big Five dimensions do show resemblance to indigenous constructs emphasizing its cross-cultural capabilities however interpretation of language and culture proves to be a barrier. Problems occurring in the Philippines indigenous dimension could also include what is categorized as indigenous; there were direct correlations between several facets of the questionnaire between the American and Philippines sample. The questionaries however were administered to university students, which could possibly have reasonable understanding of western constructs aiding them in interpretation of the question, undermining their defined category of indigenous. This factor questions the validity of the experiment, as it can be debated whether the participants successfully represent indigenous personalities, if not results extracted from the experiment can be proven somewhat irrelevant as the universal quality of standardised personality tests are not being fully explored. (Katigbak, Church, Guanzon-Lape\~na, Carlota & del Pilar, 2002). The (Nscb.gov.ph, 2014) states that in 2005-2006 2,483,645

To determine whether the students’ college education impacted on the test results a second test should be conducted on people who do not possess such education.

and the five-factor model. Journal of Research in Personality, 41,

There has been debate between psychologist on whether standardized personality tests such as the Big Five inventory I are suitable and produce high internal reliability in relation to cross cultural examinations. The main facets of their arguement state, (a) traits and behaviour may be vastly different across cultures, (b) the researchers are basing their experiments of western qualities

(Church, in press; Enriquez, 1979). Across varied cultures in developed worlds the MMF displays a consistency and reliability amongst the five measurements, however it has been observed that extraversion and agreeableness measurements can be distorted by specific cultural traits. (Ortiz et al., 2007; Rolland, 2002). 355 It is apparent that only two factors seem to possess an internal reliability evident in the husband spouse category

De Raad, B. (1994). An expedition in search of a fifth universal factor: Key lexical only gave what researchers chose, not from the

An alternative taxonomic study of 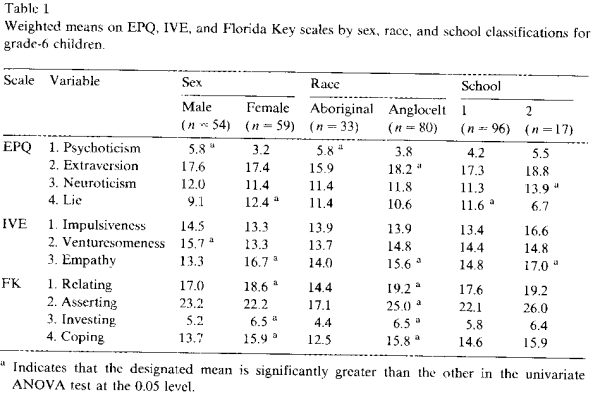 The data shows differences in the mean with several test score outside the suitable bracket, it is noted that under the variable race, aboriginal people scored 5.8 which is out of the .05 level, the data between the two groups proved to be quite different.

Although results were provided and proved to be similar between the two groups, when analysing the mean score attention arises when understanding