This chapter presents the data analysis and interpretation also purpose of this study was to compare the learning of developmental mathematics course which received instruction in two different environments to determine whether mathematic online course enhanced their learning. Specifically, the study investigated whether there was a significant difference in mathematics online course as measured by the exam of students enrolled in mathematic classes receiving traditional instruction, with online instruction. The Statistical Package for the Social Sciences (SPSS) was used for the analysis with an alpha = .05 level of significance.

The paired samples t-test is hypothesis test of the difference two groups means based on the means of two paired samples. Under this test, the two samples are compared in such a way, that the elements in one sample are matched or paired with the elements or paired with the other sample, thereby helping in doing a precise analysis in finding out whether any significant difference exists in the two series.

In our analysis, under paired samples t-test, the two samples are:

Where, mean is difference between the two series. The alternative is two-tailed at a signification level of 5% (α=0.05).

This is the next box as will views. It contains info about the paired samples t-test that the conducted. There will be most interested in the value that is in the final column of this table. Take a look at the Sig. (2-tailed) value.

Sig- This is the p-value associated with the correlation. Here, correlation is significant at the .05 level.

This value will tell us if the two condition Means are statistically different. Often times, this value will be referred to as the p value. In this example, the Sig (2-Tailed) value is 0.005.

It is means there is no statistically significant difference between two groups. it can conclude that the differences between condition Means are likely due to chance and not likely due to the IV manipulation.

What does the t-value and two-tailed P-value how do they compare to each other? Is this information "significant" enough to say that with online course came from the same family as without online course?

The traditionally accepted P-value for something to be significant is P < 0.05. So if there is less than a 5% chance that two groups came from the same group, then it is considered a significant difference between the two groups.

Therefor there was a statistically significant difference in exam scores, decidedly two methods

The analysis of tests responses shows that the instruction methodology of imparting the concept of technical debt through with online course choices is effective. At the following figure 4.4 as shown rate of students participate with online course increased. 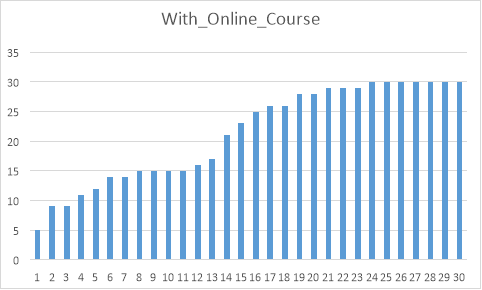 In view of the writing and the discoveries of the current study, a few conclusions can be drawn concerning developmental mathematics online course. The results of this study indicate that video technology can using for development mathematic online course. The mere presence of video online course does improve student learning mathematic lecture. Students have an interest in utilizing technology for a variety of purposes including academics. Online video course have the potential to be useful tools to improve learning. They provide educators the opportunity to create and record courses then upload on Moodle tool. Also give opportunity to student for participate mathematic course without missing lecture.

Many students enter college without the mathematics skills and knowledge to successfully meet their educational and career goals (National Center for Educational Statistics, 2003b). Most colleges and universities offer developmental mathematics courses and other services to prepare these students for college-level mathematics courses. Developmental mathematics courses have been taught with the traditional lecture method used for years in most college-level courses (Armington, 2003; Kinney and Kinney, 2003; Maxwell, 1979; Miles, 2000; Roueche and Kirk, 1974). Educators are concerned about the low pass rates (Boylan, Bonham, and White, 1999; Trenholm, 2006; Waycaster, 2001; Wright, Wright, and Lamb, 2002) and are exploring alternative instructional approaches in order to increase the number of students who stay in school or institute, pass a class mathematic course, and graduate. Video mathematic online course make conceivable a variety of new showing methodologies, permitting students to have decisions about when, where, and how they learn math. The review of literature indicated a need for further studies on the impact of video record and uploaded on Moodle tool on the learning of developmental mathematics course. The purpose of this study was to investigate differences in the academic performance of students enrolled in a developmental mathematics course using traditional instruction with mathematic online course.

Students’ mathematics course at the end of the course related to be exam at the Institute Hawler for Computer. Therefore, the exam, which measured mathematical performance with online course with without online course, was used as the Hypothesis in the analysis. T-Test: Paired Two Sample for Means adjusted the means of the exam paired groups.

Null Hypothesis case there was significance difference in the mathematics lecture for developmental mathematics course using traditional lecture and video record and uploaded on Moodle then students participate with watched video online. The independent variable was method of instruction, and the dependent variable was the exam score. At the .05 level of significance, there was significant difference between the exam scores of students who completed a traditional developmental math course and watched video online course on Moodle tool.

Also recommended add same technology for learning in the institute Hawler for computer.