Geography and Culture of the uk

The United Kingdom, which is also commonly referred to as Great Britain is an island country located of the northwestern coast of the European mainland. The United Kingdom is comprised of England, Wales, Scotland and Northern Ireland. The capital of the UK is London which is according to Encyclopedia Britannica is “is among the world’s leading commercial, financial, and cultural centres.” The primary language in the United Kingdom is English, however there are several regional languages including Scots, Scottish Gaelic, Welsh and Irish.

In the 19th century the Great Britain led the industrial revolution and was one of the most powerful nations in the world. Following World War II, Britain was left essential bankrupt and was forced to dismantle the British Empire. Most of its colonies became independent, and many sectors of the British economy became nationalized. Not until the 1960 did Britain fully recover from World War II. In 1979 Margret Thatcher became Britain’s first women prime minister. She became commonly known as the “Iron Lady” for her politics and leadership style. In the 1980 she began privatization of state-owned companies and reducing the power of trade unions.

According to the Hofstede Centre website the current rankings for the United Kingdom is as follows, Power distance 35, Individualism 89, Masculinity 66, Uncertainty avoidance 35, and Long Term Orientation 25. At a rank of 35 the United Kingdom ranks low in the power distance, reflecting that their society stresses equality and opportunity. With Individualism score of 89, it reflects that as a society they believe in the rights of an individual rather and act as individuals rather than members of a group or as one society. The low ranking of 35 for Uncertainty avoidance shows that as a society they are less rule oriented, more accepting of ambiguity and are more readily to accept change. They have a more they go with the flow approach. With Masculinity score of 66, this reflects a culture that favors more traditional masculine roles of control, achievement, and power. With a score of 25 the Long Term Orientation people look more to the long term rather than the right now. It is more about looking more into the future and putting value in tradition and persistence.

According to the Central Intelligence Agency World Factbook website the current population in the United Kingdom 63,742,977, placing it 23rd on the world country comparison list. The median age is 40.4, (Males 39.2, Females 41.6) and largest section of the population at 41% is 25-54 year olds; see the following pie chart for age comparisons. Of the major urban areas London is the most populated at 8.615 million, Birmingham second at 2.296 million and Manchester third at 2.247 million. In regards to e urban vs. rural populations, the United Kingdom stands at 80% urban, 20% rural. The United Kingdom is 29th on the world comparison chart for life expectancy the total population 80.42 years (males 78.26, Female 82.69). 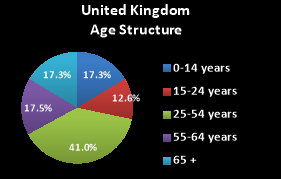 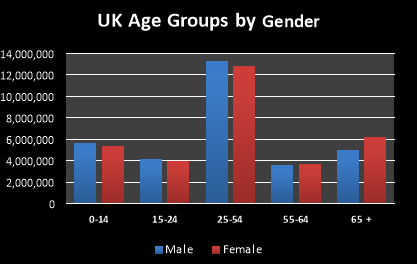 The form of government in the United Kingdom is that of a Constitutional Monarchy. Queen Elizabeth II is the Head of State in the United Kingdom; however her role is not that of a ruler of the country she fulfils important ceremonial and formal roles with respect to Government. David Cameron is the current Prime Minister and holds the senior minster role also considered the Head of Government and Head of the Executive Branch. Parliament is an essential part of United Kingdom government. The main roles of Parliament are legislation, debating and passing all laws, enabling the government to raise taxes and examine and challenging the work of the government. Parliament is made up of two houses, the House of Commons and the House of Lords, the two houses act as a check and balances system as decisions made in one house have to be approved by the other. The House of Commons is a publicly elected, the House of Lords members are appointed by the Queen.

According to the CIA’s world fact book the primary religion practiced in the United Kingdom is Christianity which includes Anglican, Roman Catholic, Presbyterian, and Methodist which represents 59.5% of the population. 4.4 % identified as Muslim, 1.3% Hindu, 7.2% unspecified, 2% as other and 25.7% as not having an affliction. In the United Kingdom the Churches of England and Scotland are recognized by law as the official churches and are subject to the regulation of the law. In the Church of England the Archbishops and bishops are appointed by The Queen. A number of high Churches of England officials have appointed seats in the House of Lords. These officials have important advisory and advocacy roles regarding legislative issues affecting the church such as abortion and euthanasia. The Church of England holds no authority in Scotland and unlike the Church of England the Church of Scotland is separate from the state.

In negotiations you must practice patience and do not try and rush your British counterparts into a decision. Do not use a hard-sell attitude or attempt pressure tactics, as this will only be counterproductive in your negations. When it comes to your business plans stick to the facts and do not over sell or schmooze, British executives are more concerned with the facts of the deal than the relationship. They are more concerned with the letter of the law than the spirit of law. British Executives tend to be direct and to the point, it is more about fact than feeling or emotion. They also tend to be very reserved and will rarely show emotion good or bad, and will often down play dangerous situations.

In 2008 the United Kingdom was hit with the Financial Crisis. In December 2008 the FTSE 100 had its largest annual drop in 24 years closing 31.1% from January 2008. The FTSE 100 is the top 100 companies listed on the London Stock Exchange with the highest market capitalization. The unemployment rate increased from 5.1% in February 2008 to 7.2% by February 2009. In 2009 the Bank of England lowered interest rates to 1.5%, which was the lowest level ever recorded. The Office for Budget Responsibility was established in 2010 was established in 2010 to provide and independent analyses of the UK’s public finances following the financial crisis of 2008.

In January 2014 the International Monetary Fund (IMF) upgraded the UK GDP forecast from 1.9% previously forecasted to 2.4% for 2014, and forecasted UK growth by 2.2% for 2015. This upgrade was the largest forecast that of any other economy by the IMF. In March of 2014 the Office for Budget Responsibility(OBR) reported that “consumer spending was the main driver for growth in 2013” and indicated the housing market is showing signs of growth. The OBR is forecasting 2.7 growth in 2014, and 2.3% for 2015.

In a recent interview on CCTV America Robin Harding, the U.S. economist editor for the Final Times reported that the UK economy is just about half way back to where it was just prior to the UK financial crisis.

The unemployment rate is gradually decreasing. According to the Office for National Statistics in its April 16, 2014 Statistical bulletin the first quarter unemployment rate for 2014 was 6.9%, down from 2013 fourth quarter of 7.1% and down from the previous year of 7.9%.

In regards to business attire conservative dress is very important in the United Kingdom. Men typically wear dark blue, gray or black business suits, solid or pin stripe. Dress shirts should be solid colored and with no pockets, collared of course. Ties are a must, solid color or with a pattern but never striped, striped ties typically signify you are a member of the British Army. Laced dress shoes and socks should be the same color as your suit. Women typically wear business suit with pants or skirts. Women should avoid loud colors and stick with the more conservative colors like the men going with dark blue, gray or black. If wearing a skirt, panty hose should be worn in neural or solid color, avoiding patterns or mesh type hosiery. Makeup and jewelry should be kept at a minimum.

When greeting a handshake is standard in business. However not all women shake hands, it is always best to observe your surroundings and follow suit. Avoid making too much physical contact, in the United Kingdom touching others in public is deemed inappropriate. When speaking to other avoid placing your hands in your pockets, it is considered rude. However avoid excessive hand gestures when speaking. Business cards are often exchanged; never place a business card in your back pants pocket. As a meeting planner always have an agenda ready and available for all, and a summary of meeting notes should be provided to all attendees. When address and individual as Mr., Ms. or Miss and last name unless you are given permission to use their first name. If an individual has an honorary title always use the title when addressing them.

As in the United States it’s not taboo however in general it is best to refrain from certain topics such as politics, religion and income. The English are very modest and tend not to discuss their achievements. Avoid asking any personal questions, even a question as simple as what a people does for work is deemed to personal. A peace sign with the palm facing out is fine; however making the “V for Victory” with your palm facing you is considered an offensive gesture.