ABSTRACT - The Map Reduce framework provides a scalable model for large scale data intensive computing and fault tolerance. In this paper, we propose an algorithm to improve the I/O performance of the distributed file systems. The technique is used to reduce the communication bandwidth and increase the performance in the distributed file system. These challenges are addressed in the proposed algorithm by using adaptive replica synchronization. The adaptive replica synchronization among storage server consists of chunk list which holds the information about the relevant chunk. The proposed algorithm contributing to I/O data rate to write intensive workload. This experiments show the results to prove that the proposed algorithm show the good I/O performance with less synchronization applications.

The distributed environment which is used to improve the performance and system scalability in the file system known as distributed file system [1]. It consists of many I/O devices chunks of data file across the nodes. The client sends the request to the metadata server who manages all the whole system which gets the permission to access the file. The client will access the storage server which is corresponding to it, which handles the data management, to perform the real operation from the MDS

The distributed file system of MDS which manages all the information about the chunk replicas and replica synchronization is triggered when any one of the replica has been updated [2]. When the data are updated in the file system the newly written data are stored in the disk which becomes the bottleneck. To solve this problem we are using the adaptive replica synchronization in the MDS

MapReduce is which is the programming primitive , programmer can map the input set and obtaining the output and those output set send to the reducer to get the map output. In the MapReduce function it is written as the single node and it is synchronized by MapReduce framework [3]. In distributing programming models which perform the work of data splitting, synchronization and fault tolerance. MapReduce framework is the programming model which is associated with implementation for processing large data sets with distributed and parallel algorithm on a cluster of nodes.

Hadoop MapReduce is a framework for developing applications which can process large amounts of data up to even multiple terabytes of data-sets in parallel on large clusters which includes thousands of commodity nodes in a highly fault tolerant and reliable manner. The input and the output of the MapReduce job are stored in Hadoop Distributed File System (HDFS).

GPFS [4] which allocates the space for the multiple copies of data on the different storage server which supports the chunk replication and it writes the updates to all the location. GPFS keeps track of the file which been updated to the chunk replica to the primary storage server. Ceph[5] has replica synchronization similar ,the newly written data should be send to all the replicas which are stored in different storage server which is before responding to the client. Hadoop File System [6] the large data are spitted into different chunk and it is replicated and stored on storage servers, the copes of the any stripe are stored in the storage server and maintained by the MDS, so the replica synchronization are handled by the MDS, the process will be done when new data written on the replicas. In GFS [7], there are various chunk servers were the MDS manages the location and data layout. For the purpose of the reliability in the file system the chunk are replicated on multiple chunk servers; replica synchronization can be done in MDS. The Lustre file system [8], which is known for parallel file system, which has replication mechanism

For better performance Mosa Store [9] which is a dynamic replication for the data reliability. By the application when one new data block is created, the block at one of the SSs is stored in the MosaStore client, and the MDS replicate the new block to the other SSs to avoid the bottleneck when the new data block is created. Replica synchronization is done in the MDS of MosaStore. 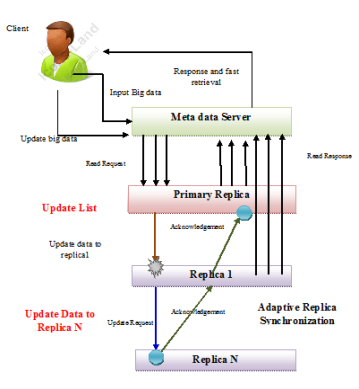 Configure the storage server in distributed storage environment. Hadoop distributed file system consists of big data, Meta Data Servers (MDS), number of replica, Storage Server (SS). Configure the file system based on the above mentioned things with proper communication. Prepare the social network big data. It consists of respected user id, name, status, updates of the user. After the data set preparation, it should be stored in a distributed storage server.

B. Data update in distributed storage

The chunk list consists of all the information about the replicas which belongs to the same chunk file and stored in the SSs. The primary storage server which has the chunk replica that is newly updated to conduct the adaptive replica synchronization , when there is a large amount of the read request which concurrently passes in a short while with minimum overhead to satisfy this that mechanism is used.

can say that the other replicas are necessary to update until the adaptive replica synchronization has been triggered by primary storage server.

In the distributed file system the adaptive replica synchronization is used to increase the performance and reduce the communication bandwidth during the large amount of concurrent read request. The main work of the adaptive synchronization is as follows: The first step is chunk is saved in the storage servers is initiated .In second step the write request is send one of the replicas after that the version and count are updated. Those SS update corresponding flag in the chunk list and reply an ACK to the SS. On the next step read/write request send to other overdue replicas .On other hand it should handle all the requests to the target chunk and the every count is incremented according to the read operation and frequency is computed. In addition, the remaining replica synchronization for updated chunks, which are not the hot spot objects after data modification, will be conducted while the SSs are not as busy as in working hours. As a result, a better I/O bandwidth can be obtained with minimum synchronization overhead. The proposed algorithm is shown in algorithm.

1) MDS handles replica management without synchronization, such as creating a new replica;

2) Initialize [Replica Location] [Dirty], [cnt], and [ver] in Chunk List when the relevant chunk replicas have been created.

1: while Storage server is active do

3: / Other Replica has been updated /

8: if Write request received then

12: if Receiving ACK to Update Request then

22: if Read request received then

37: if Synchronization Request received then

The replica in the target chunk has been modified by the primary SSs will retransmits the updated to the other relevant replicas, and the write latency is which is required time for the each write ,by proposing new mechanism adaptive replica synchronization the write latency is measured by writing the data size. 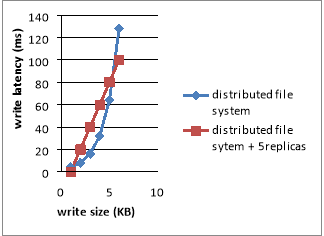 By the adaptive replica synchronization we can get the throughput of the read and write bandwidth in the file system. We will perform both I/O data rate and the time processing operation of the metadata. 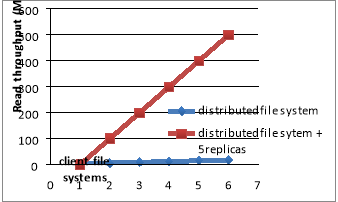 In this paper we have presented an efficient algorithm to process the large amount of the concurrent request in the distributed file system to increase the performance and reduce the I/O communication bandwidth. Our approach that is adaptive replica synchronization is applicable in distributed file system that achieves the performance enhancement and improves the I/O data bandwidth with less synchronization overhead. Furthermore the main contribution is to improve the feasibility, efficiency and applicability compared to other synchronization algorithm. In future, we can extend the analysis by enhancing the robustness of the chunk list