Abstract. An All-IP network is probably getting highly feasible since all applications and services in the telecommunication are already getting IP enabled. Internet Protocol version 6 or IPv6, is a later version of IP suite as it is designed to handle the increasing number of Internet applications. Security has become a major concern for the IP next generation network architecture and is considered as one of the most fundamental requirements for business continuity and service delivery. Several initiatives have been made by researchers to integrate secure IPv4/IPv6 address translation between IPv4 and IPv6 networks. But, not much progress has been reported in recent past. Hence, in this research, An Integrated Architecture for Secure IPv4/IPv6 Address Translation between IPv4 and IPv6 Networks, with an IPv4/IPv6 Enabled Gateway Translator (IP46EGT) has been proposed to achieve MAC-level, VPN-IPSec and Certificate level security. Network performance is evaluated and the generated results are tabulated and graphically presented.

The next generation Internet Protocol, IPv6 is intended to replace IPv4, which is gaining popularity now-a-day and exists sparsely in today’s world. Though IPv6 contains built-in IPSec security protocol, the initiation of IPv6 makes changes in the security field and transition from IPv4 creates new risks and weakens the security strategies of an organization. IPv6 is enmeshed with various issues: its global interoperability is limited due to the weakness of the encryption algorithm, IPSec has not yet been fully standardized and there is no protection against Denial of Service/Flooding attacks [1]. One of the core issues with IP security exists today is that it is an “add-on” and was not built-in from the start, in which the core functionality is developed first, which then satisfies the needs of security requirements. It tends to create a problem because IP is becoming ubiquitous form of communication that affects the entire enterprise [2].

IPSec protocol suite, as an extension to the basic IP Protocol, provides confidentiality, authentication service and overcomes the security problems caused by the mobility between the mobile node and the home agent [3]. IPSec is compatible with current Internet standards in IPv4. But in IPv6, IPSec is defined as mandatory feature and the objective of improved security is to create routing changes that provide both mobility in the network and safety against various security threats [4].

To prevent the attacker from establishing false connections and to ensure the integrity of the mobile node and its peers, security in the proposed architecture guarantees data origin authentication of IP packets through Cryptographically Generated Address (CGA), while securing binding update message between the mobile node, home agent and the correspondent node. Hence, in this research, an Integrated Architecture for Secure IPv4/IPv6 Address Translation between IPv4 and IPv6 Networks, with an IPv4/IPv6 Enabled Gateway Translator (IP46EGT) has been proposed to achieve various levels of security namely MAC-Level Security, VPN-IPSec Security and Certificate level security. Network performance is evaluated and the generated results are tabulated and graphically presented.

Frederic et al. [5] advocated various algorithms and tools which ensure the security configuration of the firewalls, and for the generation of the IPv6 addressing scheme in and for an IPv4 enterprise network, in which the firewalls deployed are stateful. A new model was suggested by Nazrul et al. [6] in the form of a new Internet Key Exchange (IKE) authentication in order to ensure end to end IPSec interoperability across translation gateway. This model uses Address Based Keys (ABK) with certificateless signature for securing the communication channel between end nodes by using their end IP addresses as public / secret keys for authentication which eliminates the notification of the revoked keys. Seewald [7] proposed an architecture for NGN which provided flexibility, interoperability and built-in security technologies (IPSec). Serap et.al. [8] proposed an autonomic and self-adaptive systems which integrates the NGN architecture with the ITU-T security model for assuring the security of NGNs and new additional features enabling it to dynamically detect vulnerabilities, threats and risk analyses. Mahdi et. al. [9] presented an integrity security open architecture model for NGN based on the concepts of an Integrated Security Module (ISM) to protect data and Targeted Security Models (TSMs) to protect entities, users, servers and resources. The protocol used in this model provides only the network-level security and the functionality of this set of protocols is only related to the infrastructure layer of the X.805 standard which is concerned with the security of network links and elements.

The proposed unique architecture is designed to integrate the two independent IP versions IPv4 and IPv6, by mutually permitting one version of IP mobile nodes to communicate with another version of IP networks. Therefore IPv4 networks communicate with IPv6 mobile nodes, and IPv6 networks communicate with IPv4 mobile nodes. This is achieved by designing a novel translator namely an IPv4/IPv6 Enabled Gateway Translator (IP46EGT) which is simulated in the form of a PC-Emulator. The IP46EGT translates IPv4 address into IPv6 address and IPv6 address into IPv4 address. When an IPv6 node communicates with an IPv4 host in the IPv4 network, the translated IPv6 source prefix is configured in the IP46EGT which detects the destination address of the IPv6 packet. If this prefix is the same as the configured prefix, the address mapping takes place and converts the IPv6 address to IPv4 address. Fig.1 represents the proposed Secure Architecture for IPv4/IPv6 Address Translation between IPv4 and IPv6 Networks. 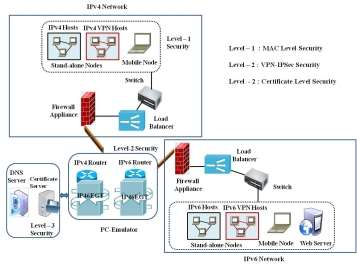 Three various levels of security namely MAC level security, VPN-IPSec security and Certificate Level security is incorporated in the proposed architecture which provides data integrity, data confidentiality, data origin authentication and replay attacks. Virtual Private Network (VPN) is incorporated in the proposed architecture to provide secure data transmission between the VPN mobile node and the network. These systems ensure that only authenticated users can access the network and the data cannot be intercepted. The PC-Emulator in the architecture generates a New Secret Key (NSKG) which is the Cryptographically Generated Address (CGA) for every communication. Load balancer balances traffic over multiple connections, which ensures the availability of the network and improves the overall performance of the availability of the applications.

MAC (Media Access Control) level security is used in the proposed architecture because of its unique identifier assigned to a network interface for communications on the physical network. The source node used for communication consists of a MAC address as the source public key (SPuk), which generates a New Secret Private Key (NSKG) as the Cryptographically Generated Private Address (CGPrA) for every communication. The NSKG is a combination of the four-digit random number (SKG) and the last two bit positions of the source client node MAC address (MSKG) that is, NSKG = SKG + MSKG. The NSKG is sent to the source and destination to establish an authentication between the mobile node and the server which provides the end-to-end security.

Virtual Private Network (VPN) is incorporated in the proposed architecture to provide secure data transmission between the VPN mobile node and the network. These systems ensure that only authenticated users can access the network and the data cannot be intercepted. VPN-IPSec permits highly secure site-to-site connectivity and protects IPv4 and IPv6 traffic as it communicates between end hosts or security gateways. Packets sent by an attacker are dropped by VPN-IPSec enabled hosts which provides connectionless integrity and authentication.

To obtain a certificate, a private secret key (NSKG) based on the public key (SPuK) is generated from the Level-1 security. A certificate is created by binding the public and the private key and the payload is passed to the Certificate Server to verify that the information is valid or not. If valid, a secured connection is established between the end-users and the translation between the source and the destination happens. If not, the connection will not be established and the translation process fails.

An Interface is designed for the proposed secure architecture for IPv4/IPv6 Address Translation between IPv4 and IPv6 Networks and is presented below.

The main focus of the experimental study is to test the functionality of the IPv4/IPv6 address translation architecture with respect security between IPv4 and IPv6 nodes and to measure the performance of these mechanisms on a network. The testing process is carried out in the lab environment using a virtual topology. The performance of the proposed system is investigated in terms of packet reachability, round trip latency of ping packet using a security enabled translator. The results of the study are tabulated and presented graphically.

The round-trip latency between IPv4 and IPv6 with security enabled translator is tabulated in Table 2. The columns labeled IPv4-IPv6 and IPv6-IPv4 shows the latency between two machines communicating directly observed to be normal as expected. The columns labeled RTL-S show the round-trip latency with security enabled translator. 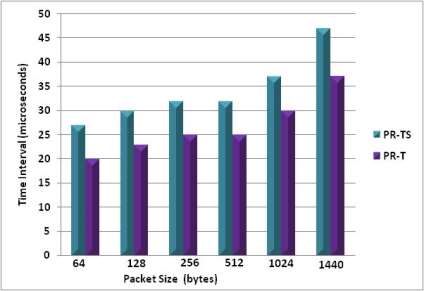 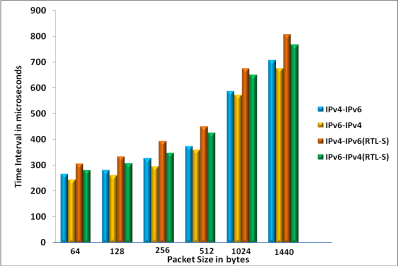 Security has become a very important issue for the communication between IPv4 and IPv6 networks. Hence, three various levels of security namely MAC level security, VPN-IPSec security and Certificate Level security are incorporated in the proposed architecture which provides data integrity, data confidentiality, data origin authentication and thereby end-to-end secure communication is achieved. Packets sent by an attacker are dropped by VPN-IPSec enabled hosts which provides connectionless integrity and authentication. The proposed architecture is tested and the results are tabulated and graphically presented.