Algorithm for Robot Navigation Without Collisions

ALGORITHM FOR ROBOT NAVIGATION AT ENVIRONMENT WITHOUT COLLISION

ALGORITHM REPRESENTATION FOR NAVIGATION OF MOBILE ROBOT WITHOUT OBSTACLE COLLISON

Mobile robot It is a kind of robot that has the ability to travel Relative to the environment (i.e. locomotion), and one of the actuators of the robot is the locomotive system

This chapter of my bachelor thesis is to develop algorithms that will help the autonomous mobile robot in visual navigation. g the robot. Then, the robot tries to understand their environment to extract data from a sequence of image data, in this case, optical, and then uses this information as a guide for the movement. The strategy adopted to avoid collisions with obstacles during movement - a balance between the right and left optical flow vectors.

An integral part of any navigation scheme is the desire to reach a destination and do not get lost or bump into any of the objects. There may be other restrictions on a given route, such as speed limits or zones of uncertainty, where in theory, of course, can pave the path, but not desirable. Often, the way is to move the robot autonomously planned, ie on the basis of previous input and without interference in real time. It can work effectively, but only on condition that the environment is perfectly known and does not change and the robot can travel on the route perfectly. However, in the real world everything is much more complicated.

Note that navigation will include:

The problem of mobile robot navigation is a very complex issue characteristic at both ends. The implementation of tasks by moving a mobile robot requires obtaining information about the surrounding-limiting environment - hence the importance of having AD sensory system that allows the observation of the environment and its perception, For this purpose, both simple rangefinder systems and contact sensors, which correspond with collision detection.

Using a constant speed of 4m/s for the algorithm and a step size of 0.125m which was obtained by the multiplication of the speed by interval in which information is received.

But considering the above algorithm it’s still going to encounter some problems. For example saw tooth pattern that occurs at the along the path, shown below: 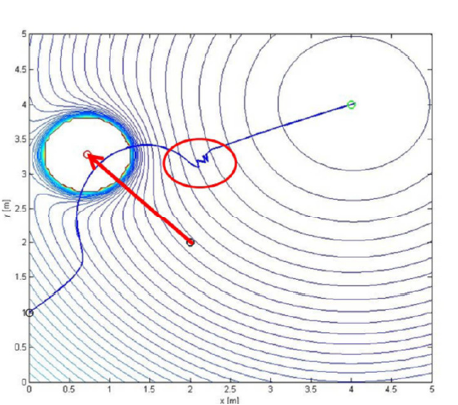 Saw-tooth happens due to fixed step size at some point in the navigation of the mobile robot reduction in step size is necessary which also means reduction in the speed of the robot . The reason for this effect is because the present point of the robot is not always the best point possible. Meaning that point after that will guide the path back, resulting in a saw=tooth pattern zig -zagging along the path. The reason this problem occurs is because the robot has a constant speed.

and an acceleration of

The constraints are |speed|<= 4m/s and |acceleration|<=5m/s. the time parameter T of the robot specification gives the constraints. Now the speed of the robot can be determined by each step at each time stop K+1

Now starting speed will be set has speed(K=0)=0m/s, which means is assumed that robot is in a static state 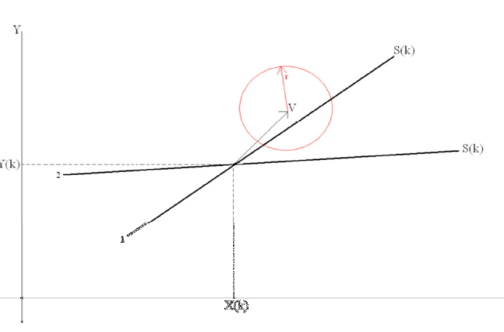 All points in the line represent the Newton’s Direction. Robot needs to move to one of its point so we can determine the speed and acceleration of robot

This is a scenario when the acceleration that is generated is not large enough to get to the point on the newton direction, solution to this can’t be found, the only way out is that the point closer to the line will move .I.e. line perpendicular to the newton’s direction must be found and the lie should intercept in the center. 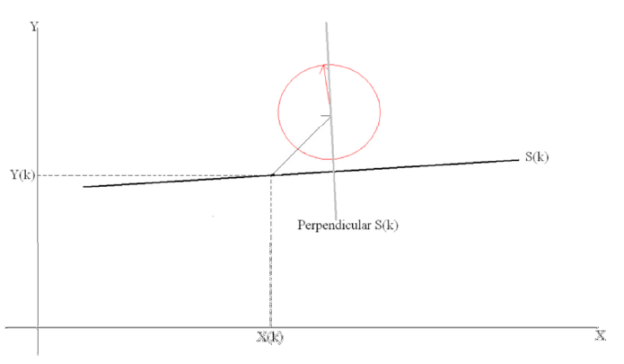 Where the position of the mobile robot is at present is

and the destination of mobile robot is

. A mobile robot has reached its minimum function when current position of the robot is equal to the target position. 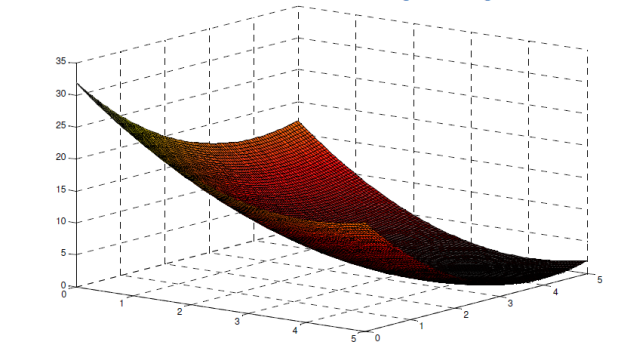 Every Mobile robot has its environment and areas that are out of mobile robots environment is therefore represented with a boundary. What the boundary represents is the size, shape and location of an object. Boundary function and function of target will both give an optimization problem when finding the minimum.

The barrier function and the target function are added up, and this leads to the following function:

This represents the variation is the distance between the obstacle and mobile robot.

Mobile robot optimization is very important in robot navigation. Choosing the most efficient path to follow to from robot’s current position to the target point around its environment, this is called Newton method. Newton direction is calculated by the optimal direction in which a step should be taken, ithis is given in the equation below:

is the gradient of target function and the inverse of hessian matrix is:

which is used to describe the second order derivative of the function of target, that is evaluated at point

(delta t) is used in describing the change in the first order derivative of function of target.

After considering the algorithm it will be right to do some experiments based on the algorithm to investigate and test whether it does what we want it to. I will be using static obstacles to test.