The Keggin-type catalysts (Q)3+nPW12-nVnO40 (n= 1-3) were synthesized by ionic exchange for oil extraction/catalytic oxidation desulfurization (ECODS) of DBT, BT and 4,6-DMDBT. The samples were characterized by Fourier Transform Infrared (FT-IR) spectra analysis, thermogravimetric analysis (TGA) and Ultraviolet-visible (UV-vis) absorption spectra analysis. The experimental results indicated that (STA)6PW9V3 exhibits superior catalytic activity and durability with about 99.14% desulfurization rate from the 500 ppm model oil within 1 h at 40 â„ƒ, and no obviously decrease in its catalytic performance was observed after five consecutive ECODS recycles with about 98% recovery rate. Therefore, the Keggin-type material is a promising and efficient catalyst for the catalytic oxidation desulfurization of diesel fuel.

Various catalysts, such as commercially available molybdic compound [4], phosphotungstic acid,[5] peroxotungsten complex [6] and polymolybdates [7] have demonstrated good efficiency with ECODS. However, phase-transfer limitation across the interface and lack of adaptive reaction environment in the hydrophobic ILs are the main drawbacks in these systems. The Keggin-type containing-vanadium POMs PMo12-nVnO40(3+n)- and PW12-nVnO40(3+n)− have demonstrated to be an effective and robust catalyst for various oxidation reactions, including ketones, aldehydes, alcohols and sulfur under mild conditions [8, 9]. However, few reports on the catalytic oxidative desulfurization by PW12-nVnO40(3+n)− encapsulated with organic alkyl chains have been reported.

In this work, we used Keggin-type containing-vanadium POMs H3+nPW12-nVnO40 (n= 1-3) grafted with a series of alkyl chains, including stearyltrimethylammonium bromide (STA·Br), hexadecyltrimethylammonium bromide (HDAâˆ™Br), and dodecyltrimethylammonium bromide (DDA·Br) as catalysts, [Bmim]PF6 as extractant solvent in the presence of H2O2 as oxidant for desulfurization. The results show that, among the synthesized catalysts (STA)6PW9V3 exhibited superior activity. Reaction parameters, such as the influence of vanadium structure, oil/catalyst mass ratio and H2O2 dosage on the desulfurization were investigated. From our experiments, it suggests that the higher number of vanadium-substituted to the catalyst results the better catalytic activity.

PW11V , PW10V2 and PW9V3 were synthesized as reported in the literature [11, 12]. Surfactant-Encapsulated POMs (SEPs) were synthesized via ionic exchange of method of PW12-nVn and surfactants (STAâˆ™Br, HDAâˆ™Br and DDAâˆ™B), respectively. PW12-nVn were dissolved in water, whereas surfactants were dissolved in alcohol. The two solutions were mixed, filtered, washed with water and ethanol before drying for 24 h to obtain the final products. All catalysts used in this work were characterized according to the reported literatures.

Synthesis of ionic liquid and model oil: Ionic liquid [Bmim]PF6 was synthesized as mentioned in the literature [10]. The ECODS was conducted via initially mixing model oil with [Bmim]PF6 inside two-necked round-bottomed flask immersed in water bath at various temperature 40, 50 and 60 °C, respectively. The ECODS commenced after addition of H2O2 30 wt. % into the (STA)6PW9V3 under stirring for 3h. Intermediate samples were collected at different reaction times from 10 min to 160 min. The remained sulfur-containing compounds in model oil after the reaction were analyzed by GC.

FT-IR spectra were measured on a Mattson Alpha-Centauri spectrometer in the range of 4000-400 cm-1. Thermogravimetric analysis was performed on Perkin-Elmer Thermal Analyzer under nitrogen atmosphere at heating of 5 °C/min till 600 °C. UV absorption was measured with Cary 500 UV-Vis-NIR spectrophotometer.

The ECODS was tested in comparison with other desulfurization systems, such as the extraction, the chemical oxidation and the catalytic oxidation (Table 1). Interestingly, the ECODS system was superior to others desulfurization systems. This is due to the persistence of catalyst with IL and oxidant in the same reaction somehow stimulates legend effect, which stabilizes the oxidant and subsequently enhances activity. In addition, the high oil-model solubility in ionic liquid results in less binding energy of adsorbents on the system, thus contributing to a much higher sulfur removal.

Fig 2 shows the removal of DBT at 40, 50 and 60 ºC, respectively. The results show that removal of DBT via ECODS increases with temperature rising. After 10 minutes for the ECODS reaction, the DBT removal efficiency was 38.47% at 40 °C, while 80.36% at 60 °C. Also, the DBT removal efficiency became stable for all three temperatures after an hour. These results depict the superior catalytic activity at 60 °C. However, the excessive higher temperature will lead to thermal decomposition of H2O2, thus low desulfurization efficiency [14]. As a result, although the catalytic effect is sluggish at 40 °C, which took around 1 h to remove about 99% of sulfur, it is economically preferred due to low energy cost and higher H2O2 stability. In addition, the durability of (STA)6PW9V3 was investigated on DBT removal for five interval cycles. The results show that, the catalyst keeps around 98 % of its activity after consecutive 5 cycles (Fig S8). Furthermore, the catalyst, (STA)6PW9V3, reserved all its characteristic peaks without significant shift after the durability test (Fig S9).

We gratefully acknowledge financial support by the NSF of China (21271038, 21071027), the China High-Tech Development 863 Program (2007AA03Z218) and analysis and testing foundation of Northeast Normal University.

[12] G.A. Tsigdinos, C.J. Hallada, Molybdovanadophosphoric acids and their salts. I. Investigation of methods of preparation and characterization, Inorg. Chem. 7 (1968) 437-441. 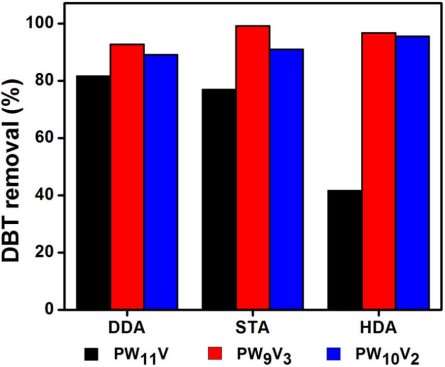 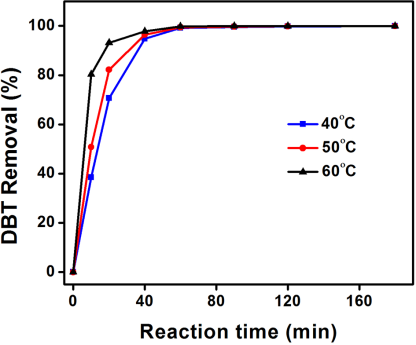 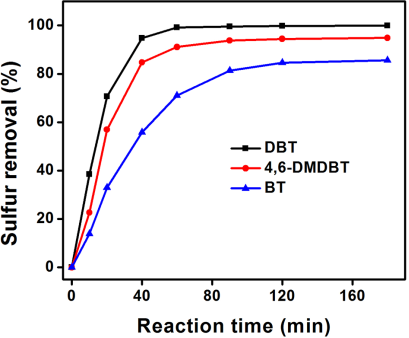 Table 1 Influence of different desulfurization systems on removal of DBT